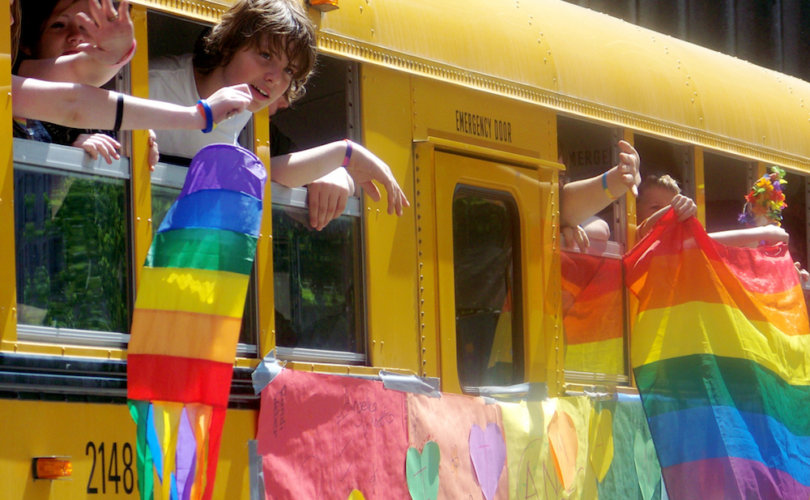 SACRAMENTO, California, November 14, 2017 (LifeSiteNews) — Children in California will be learning to identify historical personages by their sexuality.

The Advocate reported that the California state board of education approved “10 LGBT-inclusive history textbooks” for elementary school students in grades K-8 last week. It also rejected two textbooks on the grounds that they did not include “LGBT history.” The exclusion of LGBT history violates California’s FAIR Education Act.

The FAIR Education Act, once informally called the LGBT History Bill, was written by Senator Mark Leno. FAIR stands for “Fair, Accurate, Inclusive, and Respectful.” It ensures that the political, economic and social contributions of people with disabilities as well as those people identified as lesbian, gay, bisexual, and transgender are included in textbooks of California’s state-funded schools. It also added sexual orientation and religion to a list of characteristics that California schools already could not present in a negative way.

In 2008, Mark Leno became the first openly gay man to be elected to the California State Senate. He introduced the LGBT History Bill in 2011. Fifty-eight other bills penned by Leno were made into law, including the California Universal HealthCare Act and the establishment of Harvey Milk Day in California.

When the LGBT History Bill was presented, there was opposition from traditional family organizations. Candi Cushman of Focus on the Family told LifeSiteNews that the Bill was unnecessary because “California has some of the most pro-active laws in the nation in this regard already on the books.”

However, homosexual rights advocates welcome the new LBGT-inclusive textbooks. Rick Zbur, head of Equality California, told the Advocate that this “is the next step for California students to learn about the contributions of LGBT people.”

Renata Moreira, executive director of the pro-homosexuality Our Family Coalition, told the Advocate that “LGBTQ students, and those with LGBTQ families, will finally be able to see themselves and our history accurately reflected in textbooks in California.