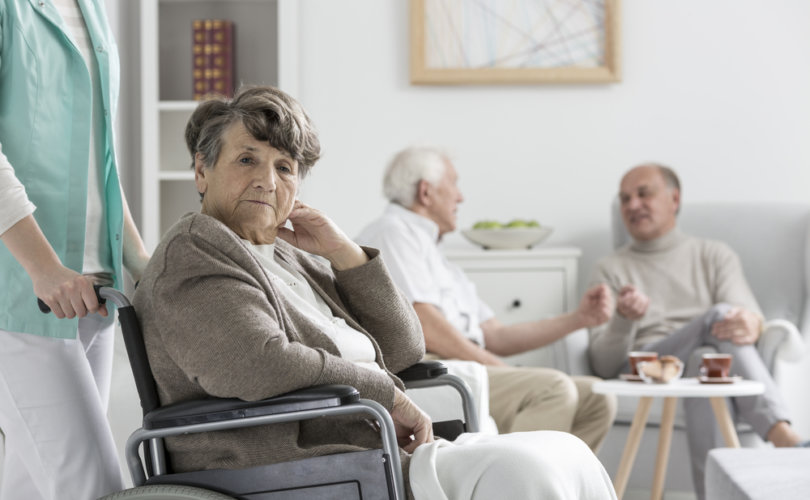 March 28, 2017 (LifeSiteNews) — A California homosexual senator has introduced a pro-LGBTQ bill that would make it illegal for a long-term care facility to reassign an elderly resident who complains about being given a gender-confused (“transgender”) roommate.

The bill, SB 219, the “Lesbian, Gay, Bisexual, and Transgender Long-Term Care Facility Resident’s Bill of Rights,” would also force old folks’ homes to allow gender-confused residents to use opposite-sex restrooms. And it would require staff at elderly care facilities to use politically correct pronouns, such as referring to a severely gender-confused man as “she,” under penalty of California law.

The bill is sponsored by State Sen. Scott Wiener, an openly homosexual Democrat who successfully sponsored similar legislation as a Supervisor in San Francisco in 2015. Last year, Wiener succeeded another homosexual activist, Sen. Mark Leno, in representing the “gay” Mecca in Sacramento.

SB 219 would make it unlawful for a long-term care facility or facility staff to “take any of the following actions wholly or partially on the basis of a person’s actual or perceived sexual orientation, gender identity, gender expression, or … [HIV] status:”

Applying the bill’s language, if an elderly woman living at a nursing home in California is upset that she has been assigned a severely gender-confused man (say, a man with penis intact and artificially-induced breasts who dresses like a woman) as a roommate, her request to be reassigned another roommate could be termed “discriminatory.”

Hence the nursing home staff could not honor the woman’s request if it had anything to do with the man’s “gender identity” or “gender expression,” because that would constitute illegal “discrimination.”

“Religious facilities would likely object to the section involving the requested sharing of rooms between persons of the opposite biological sex who are not married to each other,” Pacific Justice Institute (PJI) chief counsel Kevin Snider writes in a March 24 letter to California state senators. “Despite these religious beliefs and practices, under the bill a facility would face criminal and civil liability for action on their religious tenets.”

In an article about SB 219 on Sen. Wiener’s site, Daniel Redman, an attorney who advised Wiener on the bill and the former legal chair of the San Francisco LGBT Aging Policy Task Force, states, “This bill makes it crystal clear that in the state of California, the law stands behind lesbian, gay, bisexual, and transgender seniors and LGBT people with disabilities and mandates respect for their gender identity, gender expression, safety, and privacy.”

But critics question whether the proposed legislation respects the dignity and “privacy” of non-transgender individuals, particularly those who, like many older citizens, retain traditional moral and religious views.

“In its current form, the Bill provides for no exemptions for facilities operated by religious entities. Perhaps this is an oversight, for religious exemptions appear in the Fair Employment and Housing Act as well as various parts of Titles VII and IX.

“California has numerous long-term care facilities run by religious organizations up and down the state. These include Roman Catholic, Jewish and a variety of Protestant nursing homes … [that] integrate religious tenets into their global mission and their day-to-day operations. … If the conduct and faith of the leadership and employees is inconsistent with the tenets of the institution, then the facility is no longer religious in any meaningful sense of the word.”

The PJI letter notes that Wiener’s bill would ban elderly care facilities from restricting “a resident’s right to associate with other residents, including the right to sexual intimacy,” as well as forbidding nursing homes from denying residents’ “right” to have sex with visitors.

“Is it the author’s position that a Catholic facility should enable residents to have sexual relations with whomever they please while on the premises?” Snider asks. “Such an arrange would resemble a bordello more than a religious healthcare facility.”

“All of us should be alarmed by the attempt to now criminalize the use of legal names and grammatically correct pronouns in nursing homes,” Dacus said. “We believe this bill is not only unconstitutional but unconscionable.”

The state of California is completely dominated politically by Democrats, who have passed dozens of pro-homosexual and pro-“transgender” bills in recent years, ranging from the “End Discrimination Against Transgender Jurors Act (2015) to the “Prevent California-Funded Travel to States with a License to Discriminate Act” (2016).

“The Democrat politicians in control of California government believe in sexual anarchy. Whatever sexual behavior or sexual ‘identity’ anyone wants to be is wickedly OK with them,” says a fact sheet produced by SaveCalifornia.com, a pro-family organization based in Sacramento.

SaveCalifornia.com president Randy Thomasson is urging Californians to oppose another pro-LGBTQ bill, SB 179, which would create a “third gender” for California drivers’ licenses.

So strong is liberal Democratic control of the legislature that “gay” and “trans” activists are proposing bills that redundantly add another layer of “nondiscrimination” criteria upon existing laws that already ban LGBT “nondiscrimination.”

In that vein, Sen. Wiener’s bill states: “While state and local laws already prohibit discrimination in public accommodations on the basis of actual or perceived sexual orientation, gender identity, gender expression, and HIV status, the promise of these laws has not yet been fully actualized in long-term care facilities.

“The purpose of this act is to accelerate the process of freeing LGBT residents and patients from discrimination,” it states.