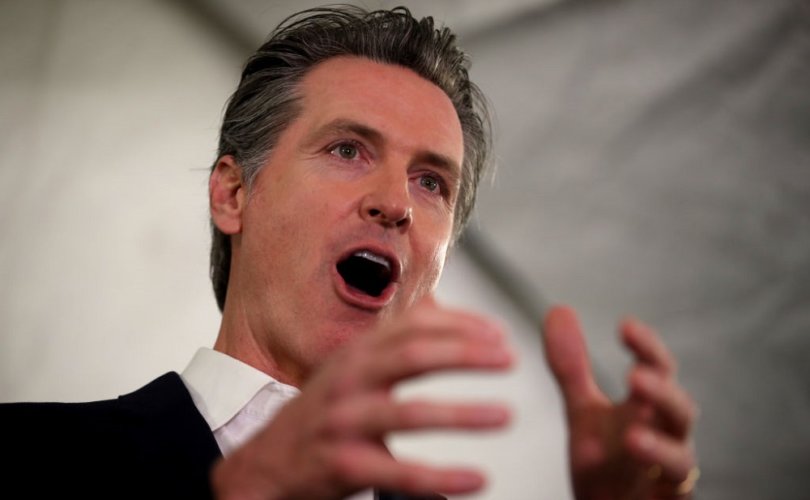 Other bills include one that creates an “ethnic studies” requirement for high school students, as well as a law to criminalize gas-powered gardening equipment and golf carts in name of fighting “climate change.”

A.B. 1084, signed by Newsom on Friday, requires department stores with more than 500 employees to implement “gender-neutral” aisles for toys and childcare products, like pacifiers and toothbrushes, by 2024. The unprecedented bill states that:

A retail department store that offers childcare items or toys for sale shall maintain a gender neutral section or area, to be labeled at the discretion of the retailer, in which a reasonable selection of the items and toys for children that it sells shall be displayed, regardless of whether they have been traditionally marketed for either girls or for boys.

“Beginning on January 1, 2024, a retail department store that fails to comply with this section is liable for a civil penalty, not to exceed two hundred fifty dollars ($250) for a first violation or five hundred dollars ($500) for a subsequent violation,” it adds.

“Keeping similar items that are traditionally marketed either for girls or for boys separated makes it more difficult for the consumer to compare the products and incorrectly implies that their use by one gender is inappropriate,” alleges A.B. 1084, which was authored by homosexual Assemblyman Evan Low, chairman of the California legislative “LGBTQ Caucus.”

“Unlike the author, I actually have children, five of them to be exact, and I can tell you it is very convenient for parents,” said Republican state Sen. Melissa Melendez. “I don’t think parents need the government to step in and tell them how they should shop for their children.”

Republican Texas Gov. Greg Abbott also slammed the law on Sunday, tweeting, “In Texas, it is businesses — NOT government — that decide how they display their merchandise.”

In Texas, it is businesses — NOT government — that decide how they display their merchandise. https://t.co/zZuLqwfX0e

Under another new law, A.B. 101, signed by Gov. Newsom last week, students who enter high school after 2026 will need to pass at least one “ethnic studies” course to graduate. The law resembles a similar one enacted by Newsom last year for California State University students.

A.B. 101 “would add the completion of a one-semester course in ethnic studies, meeting specified requirements, to the graduation requirements commencing with pupils graduating in the 2029-30 school year,” according to the law, and “would expressly authorize local educational agencies, including charter schools, to require a full-year course in ethnic studies at their discretion.”

Sample lessons cited in the model curriculum approved by the California Department of Education this year include “The Black LGBTQIA Experience,” “#BlackLivesMatter and Social Change,” and “US Undocumented Immigrants from Mexico and Beyond.” A section on the Black Lives Matter movement calls on teachers to “highlight[] the narratives of Black women and LGBTQIA identifying people that have been impacted by police brutality.”

Republicans condemned A.B. 101, which passed strictly along party lines in September, as a move to institutionalize Critical Race Theory (CRT) throughout the California school system.

Gavin Newsom has signed a bill to make CRT a high school graduation requirement, two years after saying the draft ethnic studies curriculum would “never see the light of day.”

Thousands of Jewish Californians also rallied against the bill, citing concerns that it would allow school districts to implement an earlier version of a model curriculum widely condemned by the Jewish community for anti-Semitic content, Fox News reported.

“In the past couple of weeks, hundreds of Holocaust survivors and their descendants, dozens of religious, civil rights and education organizations, thousands of Californians, and hundreds of California high school students and parents have urged Newsom to veto the bill,” AMCHA Initiative, an anti-Semitism watchdog, said in a press release on Friday.

“This is a dark day for Jewish students in California and the dozens of other states that historically follow California’s lead.”

Several California school districts, including in San Francisco, Riverside, San Diego, and Fresno, already require ethnic studies for graduation. At the same time, the state’s public schools consistently score among the worst in the nation in key metrics like reading and writing.

One of the dozens of other bills approved by Gov. Newsom this weekend would criminalize both the sale and use of gas-powered gardening equipment, like leaf blowers and lawn movers, by as early as 2024.

The legislation additionally seeks to ban golf carts and other vehicles with small off-road engines, and will likely impact more than 50,000 small businesses, according to the Los Angeles Times. A.B. 1346 targets portable gas-powered generators as well, with enforcement left to the discretion of environmental officials on the California Air Resources Board.

The bill author, Assemblyman Marc Berman, D-Menlo Park, described the law as “a pretty modest approach” to limit pollution. The ban follows an executive order by Gov. Newsom last September that outlawed the sale of gas-powered cars and trucks in California by 2035.

Other measures signed by the governor last week include bills banning protests near vaccination sites and mandating feminine hygiene products in school bathrooms.