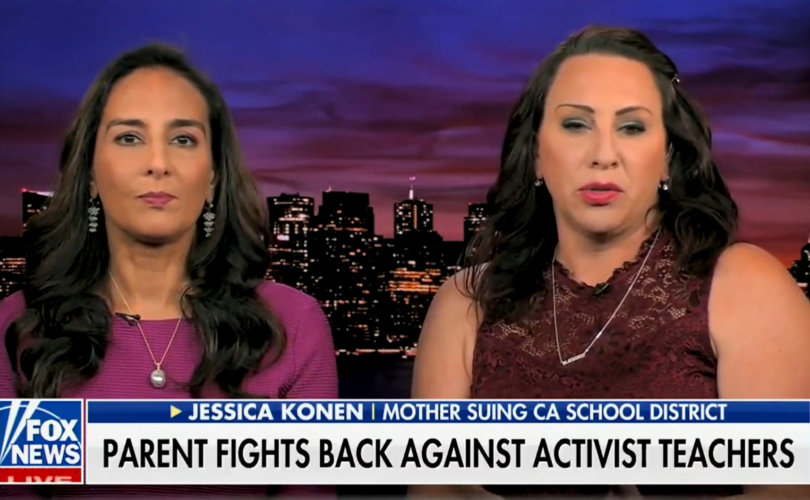 (LifeSiteNews) — A California mother is taking legal action after teachers and school officials allegedly engaged in “predatory” and “grooming” behavior to indoctrinate her seventh grade daughter into identifying as transgender.

The Center for American Liberty headed by Harmeet K. Dhillon filed a lawsuit last week on behalf of the mother, Jessica Konen, contending that teachers Lori Caldiera and Kelly Bakari along with the Spreckels Union School District in Monterey County violated Konen’s rights under California law when they secretly invited Konen’s daughter to an “equality club” where they coached her to take on a different gender identity.

The claim alleges that the school district and teachers kept club participation secret, encouraged children to lie to their families, and inflicted emotional distress upon Konen and her daughter.

“My family’s already gone through so much and nobody else needs to go through this,” Konen told Fox News’ Laura Ingraham during an interview, adding that “you wouldn’t expect a teacher to be predatorial towards a child.”

“They stepped out of their line. In seventh grade you find out that there’s secrets, there’s lies. Their tactics are disgusting,” she continued. “I feel, as a mom, disturbed by this because it is my right to parent [my daughter] and they took that right away from me.”

ICYMI: Since last night’s @IngrahamAngle segment on @Liberty_Ctr legal action against the Spreckels school district in Salinas, CA, I’ve heard from parents in other areas who describe similar secretive trans grooming by school officials. Did this happen to your family? https://t.co/mY4F57ehWG

According to the lawsuit, Caldiera and Bakari, who operate the “Buena Vista Equality Club” at the school, engaged in “predatory” behavior as they recruited children, including Konen’s daughter, whom they “had identified as potential LGBT+ students” based on comments made by or about the students as well as “their own observations.”

The teachers then allegedly instructed their recruits about “LGBT+ identities, such as homosexuality, bisexuality, transgenderism, gender non-conformity, etc.,” urging students to take on different gender identities.

“Ms. Caldiera and Ms. Baraki would instruct students to research a particular topic and then have follow up discussions with the student about that research,” the lawsuit continued, asserting that occasionally the teachers “would introduce and push LGBT+ identities on students that the students resisted.”

Knowing that some parents would not want their children to participate in such a group or begin experimenting with divergent sexual identities, Caldiera and Baraki also reportedly told children not to tell their parents about the club or “their new LGBT+ identities and expression.”

According to the lawsuit the teachers also didn’t keep records or rosters of club attendance “so that parents could not discover their children’s participation in the club or new LGBT+ identities,” and held meetings during lunch rather than after school “so that students, who were too young to drive, could better hide their participation.”

The lawsuit specifically contends that the teachers deliberately kept Konen in the dark about what was going on with her daughter, with teachers allegedly referring to the child by her birth name and “corresponding pronouns” while in the mother’s presence but then switching to use a “new name and pronouns” when Konen was not present.

The New York Post reported that Konen ”decided to take action after leaked audio from the California Teachers Association’s LGBTQ+ conference allegedly showed Baraki and Caldiera discussing their methods of running the club without parents’ knowledge of their kids’ participation.”

“When we were doing our virtual learning — we totally stalked what they were doing on Google, when they weren’t doing school work,” Baraki said in the recording, according to the Associated Press. “One of them was googling ‘Trans Day of Visibility.’ And we’re like, ‘Check.’ We’re going to invite that kid when we get back on campus.”

Caldiera has subsequently claimed that the comment was taken out of context.

The Post reported that Spreckels Union Elementary School District Superintendent Eric Tarallo refused to give a comment about the lawsuit filed against his district. Tarallo did say, however, that the teachers named in the lawsuit are on administrative leave and will remain so until an independent investigation is conducted.

Caldiera and Baraki have both been on leave since November.

“The claim submitted by Ms. Konen will be addressed in the appropriate manner within the judicial system,” Tarallo told the Post. “We are currently reviewing and updating our policies and procedures regarding student clubs and will bring those draft policies to the Board of Education as soon as feasible.”

Officials with the California Teachers Association have accused the Center for American Liberty of “pushing its own political agenda through litigation” by seeking to keep parents informed about the radical gender ideology pushed by public schools, the Post reported.

For its part, the Center for American Liberty has pointed out that the incidents that occurred in the “Buena Vista Equality Club” are likely not exclusive to just one Monterey County school district.

“Undoubtedly, Jessica’s [case] is not the only one of its kind,” the law group said in a statement. “The California Department of Education encourages schools to keep secrets from parents much like the Spreckels Union School District did with Jessica.”

“This usurpation of parental rights cannot go on unchecked,” the legal organization added.

“It is bigger than this reckless school district and we aim to make sure that everybody knows about it,” @pnjaban told @foxandfriends. #LegalNews #California #school https://t.co/51qdIJonJH

Meanwhile, Konen’s daughter has since reportedly returned to her former self, re-adopting her own name and embracing her biological sex after being removed from the influence of the teachers and entering eighth grade.

For Konen, the lawsuit is intended to protect the rights of other parents in similar situations and to provide justice for her own daughter.

“My daughter, I love her, and she deserves justice,” Konen told Fox News’ Laura Ingraham.