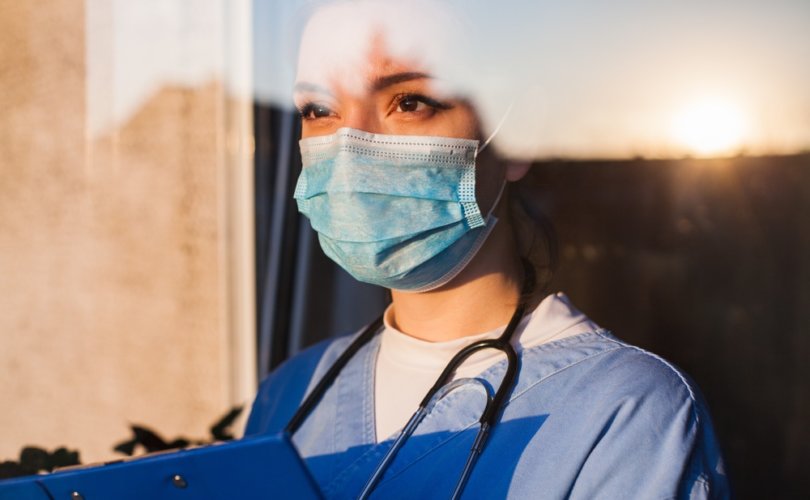 According to the language of the legislation, the measure would “designate the dissemination of misinformation or disinformation related to the SARS-CoV-2 coronavirus, or ‘COVID-19,’ as unprofessional conduct. The bill would also make findings and declarations in this regard.”

If signed by Gov. Newsom, who has yet to publicly signal his support for the measure and has three weeks to decide whether or not to sign it, the legislation would be the first in the U.S. to authorize the punishment of physicians who buck the prevailing narrative on COVID-19.

After introducing the bill earlier this year, Assemblyman Low had argued that licensed physicians “must be held to account” because they “possess a high degree of public trust.”

“The spreading of misinformation, of inaccurate COVID-19 information, contradicts that responsibility and threatens to further erode the public trust in the medical profession and puts all patients at risk,” Low said.

A physicians group has already filed a legal challenge against the legislation.

In a lawsuit against California’s Medical Board, Physicians for Informed Consent (PIC) blasted the measure as an attempt to “unconstitutionally target dissenting physicians, including by attempting to intimidate by investigation, censor and sanction physicians who publicly disagree with the government’s ever-evolving, erratic, and contradictory public health Covid-19 edicts.”

A hearing on the group’s motion for preliminary injunction is set for Sept. 27. PIC requested that the judge order the board “to stop all its investigations of physicians for protected free speech, including but not limited to the public expression of views about the pandemic, the mandates, vaccines, treatments or any other content relating to the pandemic.”

According to Bishop, “the problem with this definition is that it treats current scientific consensus as unchallengeable truth.”

“An unintended consequence of this bill will be to stifle the scientific process. Yet unsparing skepticism is fundamental to the scientific enterprise,” he wrote. “Scientific knowledge is based on a continuing process of questioning, observation and experimentation.”

Bishop pointed out that CDC Director Dr. Rochelle Walensky recently admitted that the CDC had been “responsible for some pretty dramatic, pretty public mistakes,” during the COVID-19 pandemic, “from testing to data to communications.”

Public health agencies and their representatives have routinely doubled back on advice and information since 2020, even espousing opinions that once may have been declared harmful “misinformation.”

Perhaps most crucially, the CDC, Dr. Fauci, and many other public health “authorities” initially claimed the jabs would prevent people from getting or spreading the virus, a statement that gave legitimacy to widespread vaccine mandates.

The claim has since been walked back, however, replaced by an assertion that the two-dose regimen of injections along with continual booster shots will protect against severe illness or death, but not infection or transmission.

Just this month, the CDC released revised guidance backtracking on universal testing recommendations and suggesting that vaccinated and unvaccinated people be treated the same, given that the vaccine-free likely have naturally-acquired immunity to the virus.

Meanwhile in the United Kingdom, as in the U.S., public health authorities have strongly encouraged the majority of people, including pregnant women, to get vaccinated against COVID-19.

An August 16 public assessment report regarding the Pfizer mRNA shots, however, found that “sufficient reassurance of safe use of the vaccine in pregnant women cannot be provided at the present time.”