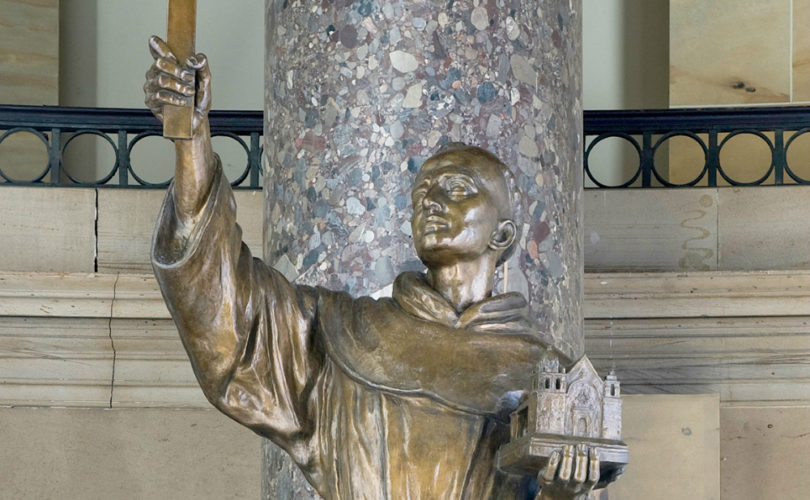 California placed the statue of Bl. Junipero Serra in the U.S. Capitol in 1931.

SACRAMENTO, CA, April 13, 2015 (LifeSiteNews.com) — Two California state legislators are proposing that a statue of a priest who will be made a saint in the fall be removed from the U.S. Capitol in Washington, D.C. and replaced with that of a homosexual astronaut.

In the decree Lara defined Ride as a pioneer in space exploration, academia and said she was “a role model to Americans everywhere.”

Lara also said that the memory of Father Serra, who John Paul II beatified in 1988 and Pope Francis will canonize when he visits the United States in the fall, would be better served by relocating his statue to the California state Capitol “where citizens and visitors can enjoy it and be reminded of his significant historical impact upon our state.”

Each state is able to have two statues on display in the Statuary Hall of the Capitol. California currently has statues of President Ronald Regan and Blessed Serra, the latter having been in place since 1931.

Lara insisted the effort to remove the statue of Blessed Serra is not based on any controversy, rather it is to recognize Ride.

Congress approved the states’ ability to change statues in 2000, and a statue must remain in place for at least ten years.

In the event the resolution passes through both California chambers, the statue of Ride will be the first known homosexual individual to be displayed in the U.S. Capitol Rotunda.