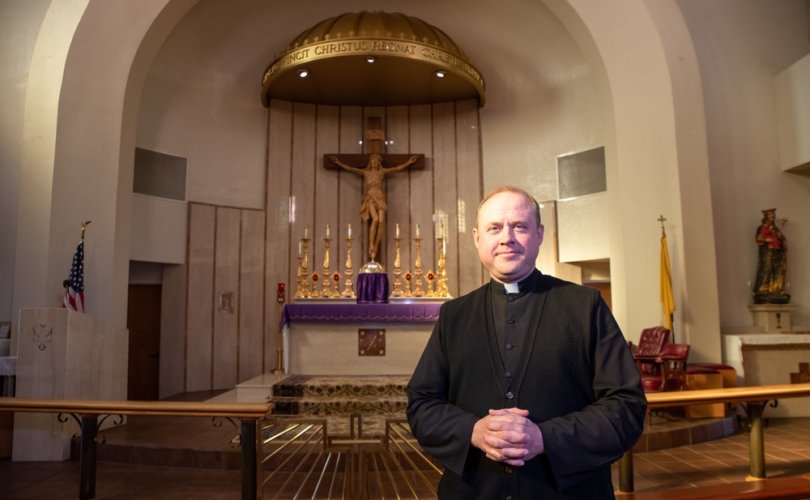 LOS ANGELES, California, December 23, 2020 (LifeSiteNews) – The California Catholic priest who sued California Governor Gavin Newsom told LifeSiteNews he was inspired to do so because of the requests and suffering of the faithful who could not attend Mass or have their Confessions heard, and approached him in search of the Sacraments.

Father Trevor Burfitt, who is a priest of the Society of St. Pius X (SSPX), scored a huge victory when a court ruling demanded that “all harassment” of the churchgoers by health officials “immediately cease.”

His church, Our Lady of the Angels, had been issued two $500 citations on October 15 after Los Angeles health officials observed about 11 people leave the Church through the back door, and were stopped by a security guard when attempting to enter the Church.

This harassment has now been “deemed unconstitutional,” and such orders cannot be enforced, according to attorney Paul M. Jonna of the St. Thomas More Society, which is representing Burfitt.

“Pulskamp said he ‘wholeheartedly agrees’ with the high court’s New York decision that said, ‘But even in a pandemic, the Constitution cannot be put away and forgotten. The restrictions at issue here, by effectively barring many from attending religious services strike at the very heart of the First Amendment’s guarantee of religious liberty,’” CWR continued.

Burfitt is the only Catholic priest in California to date that has challenged Governor Newsom’s prohibition on indoor worship.

“It is leadership,” she said. “This is what we need more priests to do. It's really such a good example for so many people to see that a priest is willing to take that step.”

Our Lady of the Angels parishioner Harry Kelsey expressed his gratitude for Fr. Burfitt’s fight to keep the parish open, calling Mass “the whole point of existence.”