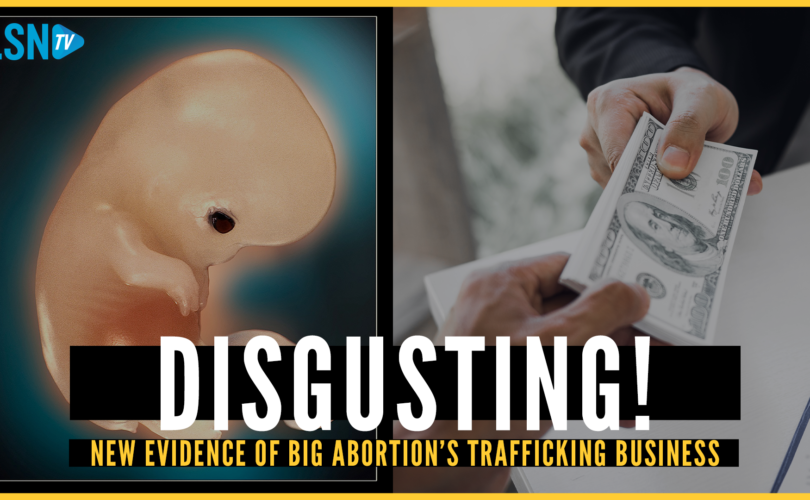 The November 11 event was organized by pro-life activist group Survivors of the Abortion Holocaust and held outside the Advanced Bioscience Resources (ABR) facility in Alameda, a Bay Area city just east of radically pro-abortion San Francisco.

In 2015, ABR was one of multiple companies targeted by pro-life activist and Center for Medical Progress (CMP) founder David Daleiden for its involvement in the “live dismemberment and fetal organ harvesting” of unborn babies.

A. J. Hurley, Director of Survivors of the Abortion Holocaust, told LifeSite’s Alejandro Rodriguez in an interview his group chose to rally outside the ABR building last week because local anti-abortion organization Pro-Life San Francisco recently obtained documentation which they say proves ABR was selling the organs of unborn babies for profit.

“Nobody can deny it anymore,” Hurley said, arguing there’s “nothing more disgusting” or “barbaric” than “the line-by-line live birth dismemberment and sale of fetal organs.”

“As Americans, we should be ashamed of this,” he said. “We should not tolerate this, let alone nobody should be making money off of this.”

A ‘nonprofit’ that specializes in trafficking unborn babies’ body parts

A “nonprofit” corporate foundation, ABR “specializes in the procurement, preservation and distribution of both human fetal tissues and full term umbilical cord blood for research …,” according to a document obtained by CMP.

“Tissues obtained through ABR are retrieved from routinely performed surgical procedures including first and second-trimester induced abortions, and full term deliveries, either natural or caesarian section,” the document states.

In 2017, the U.S. Department of Justice launched a federal investigation into ABR for allegedly illegally selling the body parts of unborn babies for profit after two Congressional committees submitted criminal referrals to the DOJ, CMP reported.

According to pro-life news outlet Live Action, although “[m]embers of Congress have repeatedly requested updates on that investigation … no information has thus far been made publicly available.”

“The reason why we’re here is today, besides the obvious stuff that’s going on, … Pro-Life San Francisco specifically obtained a fetal organ pricing sheet from ABR due to a public records request and the actual invoices for how much they’re getting for these late term second trimester fetal organs intact,” Hurley told LifeSite.

Hurley said that pancreases, livers, thymus glands, and the intact cadavers of unborn children are listed on the pricing sheet and invoices.

“The list goes on. There’s a whole host of line items that they have profited from,” he said. “We have the actual invoices, some to the tune of $20,000 for pancreas. And they are making tons of money off of this up here.”

Kristin Turner is the executive director of Pro-Life San Francisco, the group responsible for obtaining the public records.

She told LifeSite’s Alejandro Rodriguez her organization has made public records requests to the University of California, San Francisco, for several years to obtain proof of fetal organ purchases made by the university for “research,” including projects using fetal tissue to create “humanized mice.”

“Through those public records requests we found pricing sheets between them and Advanced Bioscience Resources that show they are exchanging money for the body parts of these children,” Turner said.

Aborted organ harvesting/research MUST END. An important part of ending the cruelty is making sure we are targeting body part providers, & companies who facilitate unethical research pic.twitter.com/aUwlC1X3m8

While according to Turner the university has said their dealings with ABR do not amount to sales and purchases, Turner argued that “it’s very clear that something that is not okay, regardless of the legality,” adding that “there is potentially illegal behavior going on here.”

Turner said her organization hopes to promote ethical research instead of research relying upon the murder and dissection of innocent babies. She said Pro-Life San Francisco works to defend unborn children and women against an abortion industry that thrives on social disorder.

Saying she “understand[s] the struggles of other women,” Turner explained that women are often “put in horrible situations when it comes to sexual assault or when we’re put in poor socioeconomic situations. But that doesn’t mean that we need to end the life of our children, and our liberation does not come at the blood of another human’s life.”

Turner asserted that “the abortion industry knows that they can use this message of women’s rights to coerce us financially to end the lives of our children for betterment, when in reality, they’re only trampling on the rights of our children and calling it progress.”

The executive director of the pro-life group told LifeSite that she does not approach her pro-life position from a religious or political perspective, but simply on the firm belief that taking an innocent life is wrong.

“I am a progressive, I’m an atheist, and I am pro-life because it doesn’t matter what you believe on any other issue,” she said. “The fact is that abortion unjustly kills another human being.”

‘They don’t think trafficking is happening’

Turner and Hurley were not the only prominent pro-lifers to protest the sale of unborn babies’ bodies in Alameda.

Lori Hughes, author of pro-life book Choose Zoe, also came out to protest ABR, which she said is “trafficking in fetal organs.”

Hughes, who is writing her second book to expose and stop the trafficking of human beings, said that human life begins in the womb and “there’s never an appropriate time for us to illegally traffic any human being.”

Saying she wanted to attend the protest to “just raise awareness,” Hughes suggested that “people think [trafficking fetal organs] isn’t happening, just like they don’t think trafficking is happening in the U.S.”

“They think this is a barbaric procedure in other countries and it is right here and it’s happening to our children,” she continued, arguing that people need to be aware of the “unethical harvesting of our body parts of our precious little unborn babies and their organs.”

‘We need your help’

In his comments to LifeSiteNews, A.J. Hurley urged fellow pro-lifers to take action and to join the fight against abortion, raising awareness about the grotesque marketing of murdered babies’ body parts.

“We know these babies are coming out alive and nobody’s doing anything about it. Infanticide is going on right up there,” he said. “We need people here. We need people to raise the social tensions so that we can bring light to this community around us to what’s going on. That’s what we need. We need your help.”

Willingly putting themselves on the frontlines to raise awareness and defend life, Kristin Turner and several other pro-life activists were arrested during the November 11 protest.

On Thursday Nov 11th members for Pro-Life San Francisco were arrested alongside activists from other pro-life groups for lawfully spreading awareness about the gruesome practices happening at @UCSF. pic.twitter.com/PKmBxm7T93

According to a social media post shared by Pro-Life San Francisco, Turner was arrested while holding forceps — a tool commonly used to violently dismember babies during abortions — which were taken away by police who referred to them as a “weapon.”

“They only admit it when it’s convenient for them,” the organization said.