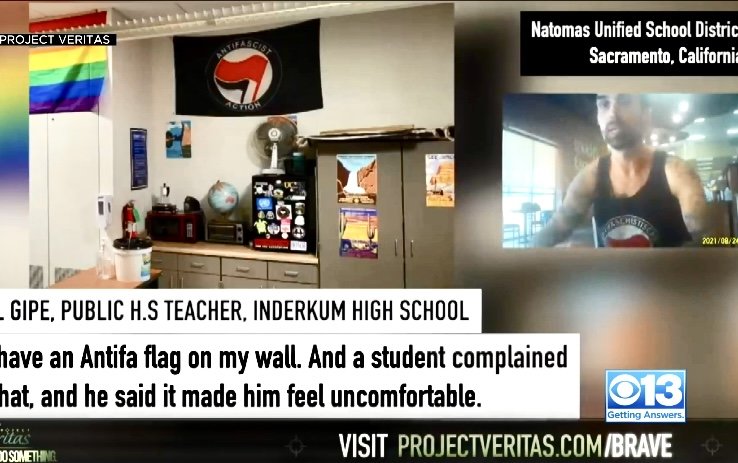 SACRAMENTO, California (LifeSiteNews) — A public school teacher in California’s capital city is set to lose his job after he boasted about turning school kids into “revolutionaries” in a viral undercover video recorded by Project Veritas.

In a September 1 statement, school district superintendent Chris Evans said the teacher’s comments were “disturbing and [undermine] the public’s trust.”

“As of today, this teacher was placed on paid leave because of his actions and choices in the classroom,” Evans wrote, adding that the district “will be taking the legally required next steps to place the teacher on unpaid leave and fire the teacher.”

BREAKING: Natomas Unified School District in California has just announced they will be FIRING the teacher who was caught on camera bragging about hanging an ANTIFA flag in his classroom and turning students into “revolutionaries” pic.twitter.com/HFq1Qp9oep

The controversy began after the conservative investigative organization Project Veritas released an undercover recording of the teacher, who bragged about giving high school students extra credit for participating in far-left activism and talked about “consistently focusing on education and a change of cultural propaganda” to achieve a socialist revolution in the United States.

In the video, Gabriel Gipe, a teacher at Inderkum High School in the Natomas Unified School District, said he incentivizes students to participate in radical protests.

“We have 180 days to turn [students] into revolutionaries,” the advanced placement government teacher said.

Asked by a reporter how he radicalizes his high school classroom, Gipe said he “scare[s] the f**k out of them.”

Gipe told the reporter about his involvement with a local Antifa, a far-left, loosely organized movement that seeks to upend traditional society and promote communist ideology.

He said he and his wife have been longtime political organizers, and that he provides a schedule for his students to get involved in local activism.

“I post a calendar every week,” Gipe told the undercover reporter. “I’ve had students show up for protests, community events, tabling, food distribution, all sorts of things … When they go, they take pictures, write up a reflection — that’s their extra credit.”

The radical teacher bragged that he hung an Antifa flag in his classroom and that he mocked a student who objected to the prominent display of the anti-American symbol.

A photo published by Project Veritas also shows an LGBT rainbow flag hung prominently in the classroom, as well as a poster of brutal Chinese Communist dictator Mao Zedong.

In the video, Gipe said he taught students about China’s Communist “Cultural Revolution” of the 1960s, telling his students that it “ultimately failed,” that there were “excesses,” and that “people were definitely, like, you know, shot in the streets who probably shouldn’t have been.”

As noted by the New York Post, “Mao’s ‘Great Leap Forward’ resulted in up to 55 million deaths and created the largest famine in human history.”

In its September 1 statement, the Natomas School District said after “taking a day and a half to investigate beyond the video, the district was able to learn more facts essential to the next steps.”

BREAKING: Pro-Antifa California Teacher Gabriel Gipe to be FIRED by @NatomasUSD as a Result of Project Veritas Video

“Natomas Unified Will be Taking the Legally Required Next Steps to Place the Teacher on Unpaid Leave and Fire the Teacher” pic.twitter.com/dDU9KePagG

According to the statement, Gipe “violated the district’s political action guidelines which are aligned with Board Policy and California Education Code.”

“[I]n addition to inappropriate statements from the video, the teacher posted a sign supporting a personal decision for at least local political issue, and possibly more,” the statement read, adding that the district has confirmed that a 2020 email advising educators of the political action guidelines for the district had been received and opened by Gipe.

The district superintendent also noted that “the teacher, using his own money, purchased a series of rubber stamps,” including one with “an inappropriate image of Josef Stalin with an insensitive phrase, as well as other stamps with Fidel Castro, Kim Jung Un and others.”

After the video went viral and the district moved to take action against Gipe, the high school teacher posted a Twitter video expressing his belief that the district will likely follow through and terminate his employment.

The New York Post wrote that a representative for Project Veritas declined to release the full, unedited version of the original video footage that led to Gipe’s administrative leave.