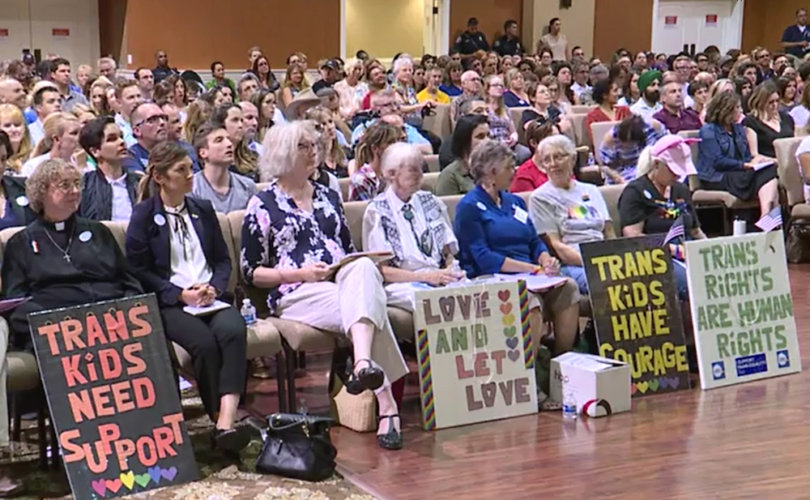 ROCKLIN, California, September 19, 2017 (LifeSiteNews) — The California charter school board rocked by controversy over a five-year-old boy who transitioned to a “girl” in kindergarten has unanimously voted not to let children opt out of lessons on transgenderism.

The model proposal would allow parents to review sensitive material before it hits the classroom and to opt their children out of controversial lessons that are not sex education. California law requires parental notice and opt-out for sex education.

And while the five-member board approved a policy to notify parents for lessons on controversial subjects, the amendment was “really weak,” says Greg Burt of the California Family Council.

The board policy directs teachers to “try to notify parents” when “something controversial comes up” but “doesn’t require any accountability if the teacher doesn’t do it,” Burt said.

Monday’s board meeting was the latest event in a controversy that erupted when a kindergarten boy transitioned to a girl in class at Rocklin Academy Gateway and neither parents nor administration were told beforehand.

The boy reportedly changed into girl’s clothes and was reintroduced to his class as a girl. Teacher Kaelin Swaney also read two pro-transgender books, including I am Jazz, in the lesson that took place just before summer vacation.

A number of angry parents complained to the board that their five-year-olds had been traumatized and were fearful they could “change” into the opposite sex.

The Rocklin school board countered it didn’t have to tell parents about lessons on transgenderism because it wasn’t sex-ed, and that discrimination based on gender identity is against the law in California.

According to a parent statement Burt provided to LifeSiteNews, the teacher refused to verify what took place during the initial lesson, leaving parents to find out what happened from their five-year-olds.

The board also refused to say what happened in the classroom, Karen England, executive director of Capitol Resource Institute, told LifeSiteNews in an earlier interview.

Moreover, when school resumed this fall, a Grade 1 student inadvertently “misgendered” the five-year-old “transgender boy” on the playground and was sent to the principal’s office, she said.

When the controversy hit national media, the board was inundated with “hundreds of angry calls and emails from throughout the country,” according to The Sacramento Bee.

Transgender advocates and parent allies were front and center at the September 18 board meeting, holding signs such as “Trans Rights are Human Rights,” “Trans Kids Have Courage” and “Love and Let Love,” it reported.

Parents opposing the lesson and represented by parents’ rights groups were also out in full force.

“To teach my kid that biologically this boy was born a boy and to teach him that now he's a girl is very confusing and I feel that it’s a lie,” parent Chelsea McQuistan told the meeting, according to Fox40News.

It was clear from the meeting the board remains convinced it would be “illegal” and “discriminatory if [it] notified parents ahead of time or had an opt out for issues of gender identity,” Burt told LifeSiteNews.

“The school district has the option to provide all kinds of opt-outs,” he said, adding as an example that students were allowed to opt out from looking at the recent eclipse.

“When you’re talking about something as sensitive and controversial as gender identity, for them to say they can’t provide an opt-out for parents is just flat-out wrong,” Burt said.

He says 40 families and 71 kids have left Rocklin Academy Schools over how the board “handled the transgenderism issue.”

And he expects that number will rise.

“A lot of parents were holding out to see what the school board would do, hoping that they would respond positively,” Burt told LifeSiteNews. “Now that they haven’t … I think you’re going to have a much bigger reaction. But we’ll see.”

His organization and other parents’ rights groups involved are also considering their next move, he added.

“We’re not giving up,” he told LifeSiteNews. “We knew it would be a long haul, and that initially they would reject our suggestions, but this is not the end of it.”