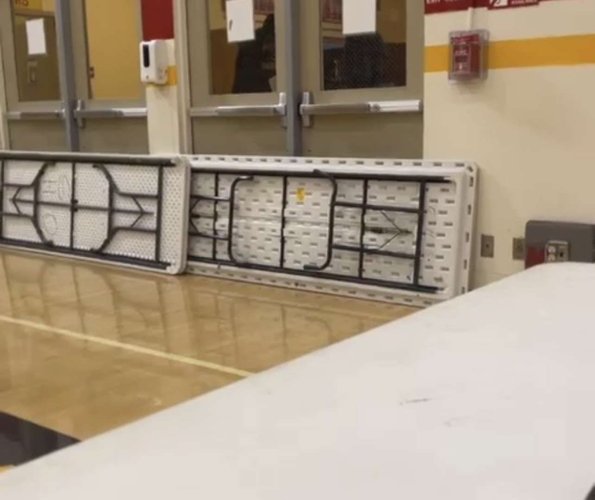 Doors were barricaded to a gym where unmasked students were being held.Twitter

OAKDALE, California (LifeSiteNews) – A California school district is being sued for its treatment of unmasked students.

In a statement provided to LifeSiteNews by Sharon McKeeman, founder of Let Them Breathe (LTB), an organization advocating for mask choice based in San Diego, LTB filed a lawsuit Friday against Oakdale Joint Unified School District (OJUSD).

LTB alleges that “OJUSD is engaged in egregious actions against unmasked students,” maintaining that unmasked students were threatened with being marked with an unexcused absence, suspension, involuntary removal or disenrollment, inability to graduate, removal from extracurricular activities, some of which not requiring a mask, and disciplinary action.

“All students have a right to a publicly funded education and to their first amendment rights,” the statement reads. “Students peacefully shared their smiles this week after Governor [Gavin] Newsom and Mayor [Eric] Garcetti were seen unmasked enjoying a football game in a stadium that has a mask mandate and these students were met with exclusion, harassment and hypocrisy.”

In early February, students from OJUSD staged a protest against Newsom’s mask policies, with students in the district’s high school accusing teachers of barricading them in the school gym. Students also accused the teachers of turning down the gym’s heat to “freeze them out.”

Oakdale barricaded doors to gym where unmasked students were being held. Not sure if it was to keep students in or out. Also reports of gym doors open + heaters turned off. Haven’t been able to confirm those reports.

Reacting to the lawsuit, one parent said, “As a mother, I am filled with mixed emotions. On one hand, I am horrified how my son and fellow Oakdale students have been punished and retaliated against for taking a stand for their Freedom of Choice. … On the other hand, I have never been more proud of my son and fellow students.”

“I am truly thankful and grateful for the Let Them Breathe organization for choosing to support and back our Oakdale students in the movement,” she said.

Justin Reden, an attorney representing LTB, said, “We no longer tolerate our schools silencing our children by masking them, or providing anything short of an exceptional, respectful, and supportive learning environment for them. Our children will not be disrespected or discriminated against by those in positions of power who do not even follow their own rules, enjoying private dinner parties and professional sporting events while unmasked.”

“Any school that does not get in line with a ‘Student First’ policy will be forced to publicly defend their actions that unquestionably discriminate, segregate, and disrespect hard working and dedicated students,” Reden concluded.

LTB has been involved in previous lawsuits like the one filed against OJSUD. In January, LTB filed a lawsuit against New West Charter School (NWC) after six students were forced to sit in the school parking lot for not abiding by the school vaccine mandate. Let Them Choose (LTC), an organization affiliated with LTB, won a lawsuit against both San Diego United (SDUSC) and the Los Angeles school districts over jab mandates.

OJSUD modified its mask policy on Monday, releasing a statement that said that “masking will be accomplished by educating students and asking them to mask, but no further actions will be taken.” The change went into effect Tuesday. OJSUD superintendent David Kline told LifeSiteNews that while he was aware of the lawsuit filed against the district, he was not aware if the lawsuit caused the district to change its student masking policy.>

Masks are known to do nothing to stop the spread of COVID-19, and are known to harm the physical and mental health of those who wear them, especially children.

California is set to end its school mask mandate on March 11, which LTB maintains is good news. “While parents are celebrating our successful efforts and the school board trustees who stood with us, we do not agree with the delayed date to lift the student mask mandate and return local control,” McKeeman said in a statement.

“Our kids are asking the governor why they have to wait two weeks longer, and many have already said they will never wear a mask again. We are calling on all schools to immediately adopt non-exclusionary policies as our lawsuit proved they can and return their focus to effective in-person education. Every day delayed further harms our children and the healing must begin today.”