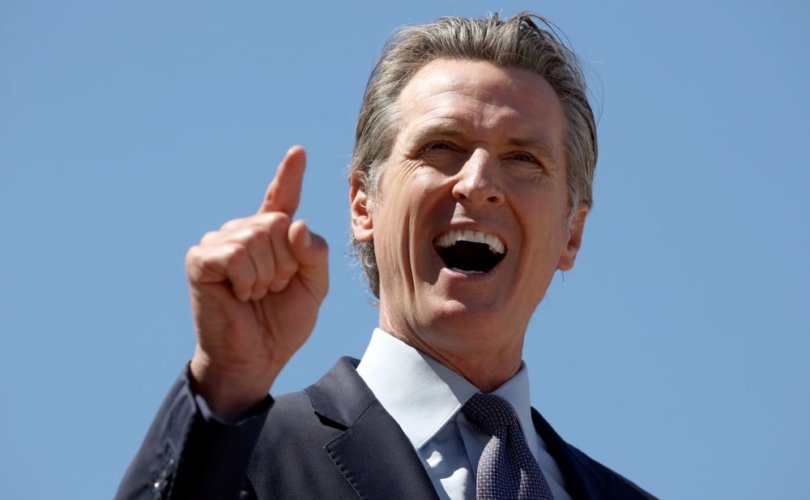 This article was updated Sept. 6 to include comment from the Thomas More Society.

SACRAMENTO (LifeSiteNews) — California legislators this week sent a raft of pro-abortion bills to Democratic Gov. Gavin Newsom’s desk for a signature. Among the measures was Assembly Bill 2223, a deeply controversial bill that would prohibit investigation into the death of an unborn child and provide legal protections for anyone who obtains or helps someone obtain an abortion.

The bill also contains language that pro-life attorneys have warned could be interpreted as decriminalizing infanticide.

The Democrat-dominated California Senate passed AB 2223 in a 30-9 vote on August 30. Gov. Newsom is expected to approve the measure.

“Assembly Bill 2223 allows anyone to commit abortions, by any means, through all nine months of pregnancy,” California Right to Life outreach director Mary Rose Short told LifeSiteNews in a Thursday email. “Even if a baby is born alive, the bill penalizes state authorities who investigate infant deaths, effectively legalizing infanticide.”

“In their efforts to ensure that no abortion is illegal, California Democrats are also legalizing infanticide,” Short said.

According to the bill, no woman shall:

“be subject to civil or criminal liability or penalty, or otherwise deprived of their rights under this article, based on their actions or omissions with respect to their pregnancy or actual, potential, or alleged pregnancy outcome, including miscarriage, stillbirth, or abortion, or perinatal death due to causes that occurred in utero.”

The earlier version of the measure had ended after “perinatal death,” leading pro-life attorneys to warn that the measure could effectively legalize the murder of a child even after he has been born, since perinatal could mean any time between one week to two years of age.

Following backlash from pro-lifers and negotiations with the California Catholic Conference (CCC), the bill was subsequently amended to clarify that the “perinatal death” would need to be connected to “causes that occurred in utero.”

However, pro-life attorneys have warned that even with the clarification, the legislation remains dangerous and could still be interpreted to protect infanticide. The Right to Life League has also called on the CCC to reverse its “neutral stance” on the bill, arguing the measure could still authorize infanticide and that the pro-abortion legislation flies in the face of Catholic teaching.

Susan Swift Arnall, Esq. Vice President of Legal Affairs with the Right to Life League, told LifeSiteNews in an email Thursday that the bill “expands California law to allow abortion on demand and without limit from conception through all nine months of pregnancy, through delivery and beyond into the first month of a baby’s life where a perinatal death — the death of a baby born alive — is ‘due to causes that occurred in utero,’ a totally vauge[sic], undefined clause.”

“AB 2223 goes even further,” Arnall explained, noting that the law would create “a special class of people immune from medical regulation or civil or criminal investigation.”

Under the legislation, anyone who assists a woman in aborting her baby:

“shall not be subject to civil or criminal liability or penalty, or otherwise be deprived of their rights, based solely on their actions to aid or assist a pregnant person in exercising their rights under this article with the pregnant person’s voluntary consent.”

“ANYONE who aids or assists moms in getting their abortions is protected and cannot be investigated — they don’t have to be a doctor or a nurse,” Arnall told LifeSite, noting that the measure “shields them from ANY investigation so long as the mother consents to the baby’s death.”

Similarly, Short told LifeSite that “AB 2223 erases the concept of an illegal abortion.”

“The bill allows anyone to use any means to kill an unborn child of any age for any reason,” she said. “No licenses, no medical standards, no counseling or informed consent. Not ‘a woman and her doctor.’ Just a mother who agrees to the destruction of her child.”

Short pointed out that the bill would forbid “a coroner’s report from being used in a criminal prosecution against a mother or anyone who assisted her in killing her child.”

According to the language of the legislation, AB 2223 would:

“No coroner has a duty to investigate and any threat of an investigation to actually determine the cause of the baby’s death triggers a private lawsuit for $25,000 plus attorney’s fees,” Arnall told LifeSite.

“AB 2223 will cover up the death of babies born alive following botched abortions because abortions fall under the vague ‘causes that occurred in utero’ language,” she said.

In her comments to LifeSite, Arnall also referenced a recent story in which a Nebraska mother allegedly helped her teenage pregnant daughter to take abortion pills and deliver a late-term baby, after which they allegedly “wrapped him in plastic to smother him and lit him on fire and then buried the body…”

According to Arnall, such a case “would not be investigated under AB 2223 because the daughter consented” and “the mother assisted.”

Jeffrey Trissell, Special Counsel with the conservative Thomas More Society, told LifeSiteNews in an email Friday that the amended version of the bill passed by the California Senate that “is still problematic because it still de-criminalizes neglect.”

“If an infant is injured in utero, and then delivered alive, the statute de-criminalizes abandoning it and allowing it to die,” he told LifeSite. “Presumably, the direct cause of perinatal death would have to be in the ‘in utero’ injury—not the neglect—but of course, proving otherwise will be practically impossible.”

The shoring up of legal protections for abortion in California comes in direct response to the U.S. Supreme Court’s landmark decision to roll back 49 years of federal abortion precedent by overturning Roe v. Wade (1973) and Planned Parenthood v. Casey (1992). The moves also separate the leftist stronghold of California from the slew of Republican-led states which have enacted statewide protections for the unborn.

In contrast to states that have moved to restrict or ban abortion, Gov. Newsom has moved to make California a “sanctuary” for abortion by welcoming women from pro-life states seeking to abort their unborn babies. The Golden State’s governor has also allocated $125 million to expand abortion access in the state.

Meanwhile, pro-abortion California legislators are currently working to create an amendment enshrining the “right” to abortion into the state constitution, and create a fund using taxpayer dollars to help bankroll abortions for nonresident women.

In a separate email Thursday afternoon, Short told LifeSite that she believes “Newsom will absolutely sign it.”

“I would be absolutely stunned if Gov. Newsom did not sign it,” Arnall told LifeSite.