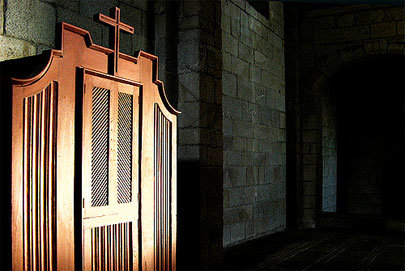 While priests and other clergy are already mandatory reporters in California, there remains a legal exemption for matters revealed in confession. Hill introduced Bill 360 in the state senate on Wednesday. In an accompanying statement, the Democrat declared, “Individuals who harm children or are suspected of harming children must be reported so a timely investigation by law enforcement can occur.”

Hill said, “The law should apply equally to all professionals who have been designated as mandated reporters of these crimes — with no exceptions, period. The exemption for clergy only protects the abuser and places children at further risk.” Despite Catholic teachings about the inviolability of the confessional, Hill insists that there should be no recognition of the privilege accorded to the sacrament of confession.

A representative of the California Catholic Conference told local reporters that the bill seeks to curtail religious freedom. “Getting the government in the confessional has nothing to do with protecting children and has everything to do with eroding the basic rights and liberties we have as Americans,” said Steve Pehanich in a statement. According to local reports, the conference has retained several PR firms to address the controversy.

Hill said Connecticut, Texas and several other states have eliminated exemptions for “penitential communication” in their statutes concerning mandatory reporting. According to local KPIX television news, Dan McNevin of the Survivor’s Network for those Abused by Priests said, “They’ve exploited a well-intentioned law to make it into their personal way of avoiding being truthful.” McNevin said that when one priest discusses sexual abuse with another priest, there is no reporting requirement. “It’s just another way they keep up this society of secrecy where they protect each other.”

California state law, as is the case in the majority of other states, already requires more than 40 professions, including clergy, to notify government authorities in cases of suspected abuse or neglect of children. Currently on the books is an exemption for “penitential communications” between an individual and a priest or other clergy if required by the doctrines of their respective religious bodies. Many other states and territories of the United States accord similar exemptions to priests, rabbis and other clergy.

The California bill is not the first attempt to force priests to violate the sacramental seal. In the Australian state of Tasmania,  legislation was introduced in October 2018 that would impose 21 years in prison for priests who refuse to disclose child abuse allegations they hear in confession.

The Christian Legal Society cited legal precedent to protect the seal of confession from government interference. In a 2005 brief, it noted: “Although modern courts do not recognize it, the clergyman-communicant privilege is best understood as grounded in church autonomy principles. The church autonomy doctrine recognizes that the church, with respect to ecclesiastical matters, possesses a sphere of authority into which the state may not intrude.”

“It is essential to the free exercise of a religion, that its ordinances should be administered – that its ceremonies as well as its essentials should be protected. The sacraments of a religion are its most important elements. We have but two in the Protestant Church-Baptism and the Lord's Supper – and they are considered the seals of the covenant of grace. Suppose that a decision of this court, or a law of the state should prevent the administration of one or both of these sacraments, would not the constitution be violated, and the freedom of religion be infringed? . . . Will not the same result follow, if we deprive the Roman catholic (sic) of one of these ordinances? Secrecy is of the essence of penance. The sinner will not confess, nor will the priest receive his confession, if the veil of secrecy is removed: To decide that the minister shall promulgate what he receives in confession, is to declare that there shall be no penance; and this important branch of the Roman catholic (sic) religion would be thus annihilated.”