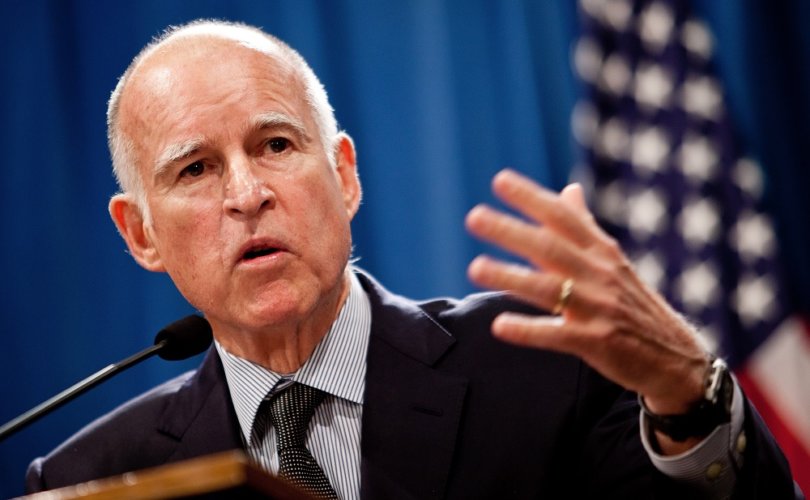 SACRAMENTO, California, March 14, 2016 (LifeSiteNews) – The clock began ticking on Thursday for the largest state in the union to begin allowing lawful termination of human life via lethal drugs.

“It's a historic achievement for California, and for a limited universe of people dealing with a terminal illness,” Democrat State Senator Bill Monning said in an npr.com report. “It could indeed be a transformative way of giving them the option of a compassionate end-of-life process.”

Monning, a co-author of the law, was pleased that a date for legalized physician-assisted suicide to commence in California had been established.

“We're glad to finally have arrived at this day where we have a date certain,” he said.

Monning also expressed gratitude for several deceased people who had advocated during their respective terminal illnesses for the bill, including Brittany Maynard, who moved from California to Oregon in 2014 to legally end her own life there, and who became famous after euthanasia activists seized upon her plight.

A video recorded by Maynard 19 days before she took her life was used in hearings for the California assisted suicide bill.

“I really believe,” Monning stated, “we use today to mark and dedicate the memory of some true champions.”

The Golden State is the fifth in the U.S. to permit doctors to facilitate the taking of patient's lives, following Oregon, Washington, Montana, and Vermont.

Legalization of physician-assisted suicide in California comes after euthanasia advocates have pushed for years to bring it to the state.

Brown signed the law in October after it passed in the California Assembly the month prior.

Modeled after laws in Oregon and Washington State, the “End of Life Option Act” had not garnered necessary support during the regular session, according to the Los Angeles Times, so its supporters introduced it in special session, meaning the bill would bypass committees where there was strong opposition.

“Californians Against Assisted Suicide remains strongly critical of this new law, and its lack of medical oversight and actual patient safeguards,” he stated.

Other Democrat lawmakers praised the law on Thursday alongside Monning, with Senate leader Kevin de Leon saying from the Senate floor before the special session's adjournment vote that the legislation “ensures Californians have access to humane and compassionate options to limit suffering at the end of life.”

The assisted suicide law requires two doctors to concur that a patient has six months or less to live before prescribing “aid in dying” drugs. The patient must be able to swallow the medication on his own and must also confirm in writing 48 hours prior taking the drugs that he will do so.

The pro-euthanasia activist group behind publicizing Maynard's death, Compassion & Choices, formerly the Hemlock Society, said the time was now for terminally ill patients to begin requesting “aid in dying” drugs from their physicians, to get ahead of a time-consuming approval process that could last as long as several weeks.

“We are telling people to start talking to their doctor now,” said the group's California campaign director Toni Broaddus.

After lobbying for passage of the law, Broadus's group is engaging in a bilingual campaign educating Californians how to participate in physician physician-assisted suicide now that it is legal in the state.

The state's Catholic bishops called it a “travesty of compassion.”

“In a few months, California will allow physicians to intentionally and legally assist people in committing suicide,” California Catholic Conference executive director Edward Dolejsi said in a statement. “This fundamental change in the doctor-patient relationship will have long-range repercussions for the people of California – especially those who are most vulnerable.”

“As medical and ethical experts have shown, a desire to take one's own life is a call for help,” the bishops' spokesman continued. “Quality palliative care, spiritual and emotional support and a respect for our human dignity are the compassionate response – not a lethal dose of drugs from a physician.”

“Already we see proposals in the legislature to expand and promote physician-assisted suicide,” Dolejsi stated. “We remain committed to providing alternatives to this “travesty of compassion.”

“We will continue working with our partners including doctors, patients and disability rights organizations to educate those impacted and vulnerable,” the group said in a statement, “as well as working to limit the law's harms and prevent any expansion.