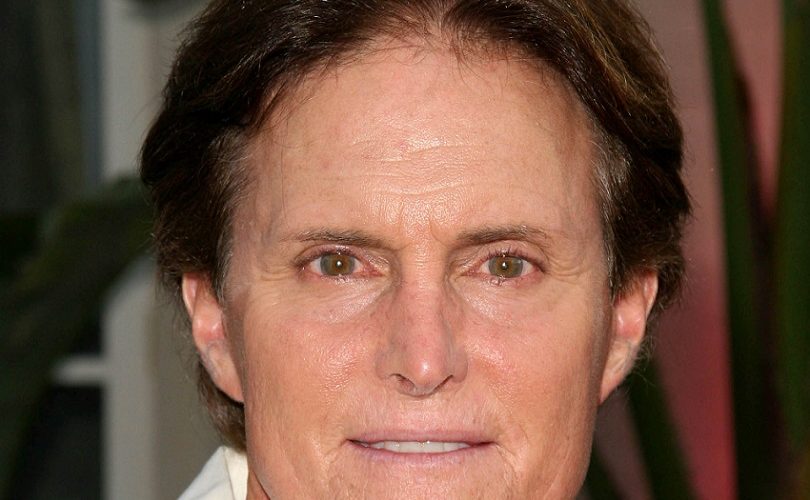 MALIBU, CA, June 2, 2015 (LifeSiteNews.com) – Bruce Jenner went public with his new look as a “woman” on Monday, posting his cover shoot for Vanity Fair magazine under the headline, “Call me Caitlyn.”

The Vanity Fair cover pic has Bruce in heavy makeup, with hair extensions, showing obvious facial surgery with parts of his face, forehead, and throat shaved off and his chest enhanced by hormone pills and silicone, posing in women's underwear.
The portrait is also heavily Photoshopped.

The public response has been almost uniformly congratulatory toward Jenner. The president of the United States came out publicly to hail Bruce’s “courage,” calling him “brave” and his public sex change “powerful.”

Bruce’s daughter, Cassandra, says that she and her father can now finally have a relationship and “just be girls together.” (Bruce Jenner wanted Cassandra aborted; read the full story here.)

“My heart goes out to Bruce, a genetic male according to everything we know, who believes that he’s a woman on the inside,” Dr. Michael Brown, Ph.D., author of “Outlasting the Gay Revolution: Where Homosexual Activism Is Really Going and How to Turn the Tide”, told LifeSiteNews. “Unfortunately, this simply confirms the gender confusion so many struggle with.”

One of the foremost Messianic Jewish apologists and host of the nationally syndicated Line of Fire radio broadcast, Dr. Brown said Jenner's “transition” is part of modern society's “complete deconstruction of gender.” He noted that now, “Facebook has more than 50 ways to define your gender, including 10 at the same time. Some today speak of a gender smoothie, where all different genders (an infinite number) are blended together.”

Dr. Brown concluded that, “What we need to do is help people from the inside out, not turn society on its head because of the very real struggles of perhaps seven out of 1,000 people.”

Peter LaBarbera, the president of Americans For Truth About Homosexuality, agreed, telling LifeSiteNews, “Like many millions of Americans and people all over the world, I am filled with pity for Bruce Jenner over his supposed transformation from man to 'woman' – which of course is happening only in his own desperately confused mind.”

“The media propaganda blitz in support of Jenner as the poster boy – I cannot say 'girl' – for the radical 'transgender' agenda is only just beginning,” LaBarbera warned. “Like so many Americans, I'm sick and tired of being lied to by the media – and called a hater and a bigot if we disagree with this insanity.”

LaBarbera then predicted, “The 'Pronoun Police' will be out in force as Americans will be told over and over again that Bruce Jenner is a 'she.' Such politically correct pretending engenders mass-lying, and will only draw more gender-confused young people into the same hopeless quest as Jenner and other DNA deniers to reject and change their God-given sex.”

LaBarbera concluded, “If Christians can't get engaged on the side of truth in the culture war now, then America will continue to descend into moral chaos.”

A very few online writers have been critical of sex change operations. Matt Walsh of The Blaze mused about the deeper issue of true femininity and authentic womanhood. “There is more to being a woman than 'feminized' facial features and frilly underwear,” he writes.

Walsh concluded that women “should not be told that [womanhood is] such a flimsy thing that a man with enough money can buy his way into it. It’s demeaning.”

Meanwhile, ESPN will give Jenner its 2015 Arthur Ashe “Courage” Award for “finally becoming himself” through extensive plastic surgery, strong injections of synthetic chemicals, heavy makeup, and a considerable amount of photo-altering.

In times past, the Courage award went to men like Pat Tillman, who gave up his chance at fortune and fame to sacrifice his life on the battlefield, but what defines courage has changed. Last year ESPN gave the award to former third string NFL player Michael Sam, for being homosexual.

In a column last month, Dr. Brown answered the question of how Christians should view the transgender debate being foisted upon the nation.

Dr. Brown advised, “As followers of Jesus, we must be gracious and loving towards those who identify as transgender…We need to have great compassion on the children who struggle with gender identity issues, continuing to do our best to get to the root causes of these issues with the goal of providing a way for them and their families to find wholeness without the need for lifelong hormones and sex-change surgery.”