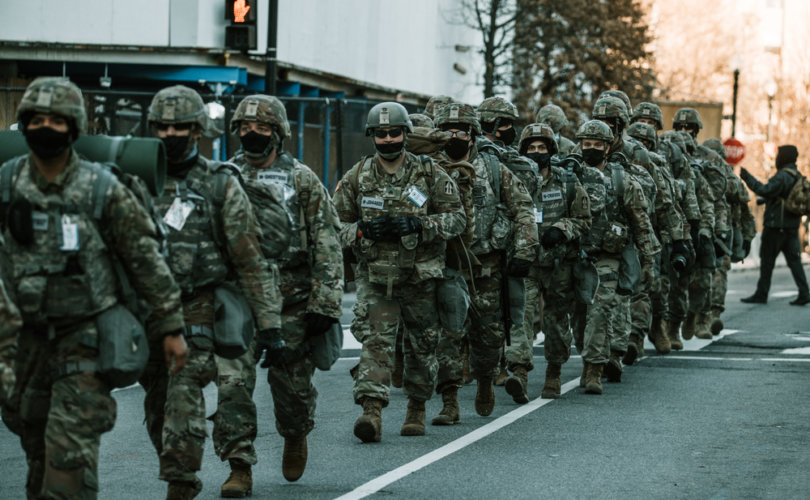 SALT LAKE CITY (LifeSiteNews) — The editorial board for The Salt Lake Tribune has a solution for how to end COVID: imprison American citizens inside their homes with the help of the National Guard.

“Cowardice and misinformation at all levels have left each one of us to fight this battle alone,” the paper lamented in a January 15 op-ed. The newspaper’s editorial board based its concern on a lack of tests in the state and an attempt by the Salt Lake City Council to repeal a mask mandate. These represents “the white flag of surrender in the battle against the COVID-19 pandemic,” the board said.

But the editorial board is not ready to give up the battle, so they want actual troops called in to fight the real enemy, which in its eyes, are the “unvaccinated.”

“[Republican Governor Spencer] Cox and others have correctly said that the best tool for fighting the spread of the virus, individually and collectively, was to get two — then three — doses of the vaccine. That is absolutely the correct advice,” the board said. But they have not been willing to go the extra mile.

“Were Utah a truly civilized place, the governor’s next move would be to find a way to mandate the kind of mass vaccination campaign we should have launched a year ago, going as far as to deploy the National Guard to ensure that people without proof of vaccination would not be allowed, well, anywhere,” the editorial board said.

Unfortunately for the board “it may be too late for that, politically and medically.”

“The truth is Omicron is out of control everywhere. Even in places with mask and vaccine mandates. We always push vaccines, but even vaccinated ppl [sic] are catching it. It’s easy to take shots from the cheap seats but this is the sort of nonsense that makes editorial boards irrelevant,” Lt. Gov Deidre Henderson said on January 15.

The truth is Omicron is out of control everywhere. Even in places with mask and vaccine mandates. We always push vaccines, but even vaccinated ppl are catching it. It’s easy to take shots from the cheap seats but this is the sort of nonsense that makes editorial boards irrelevant pic.twitter.com/Zladdqnulc

“Remember that time Paul Huntsman and the Salt Lake Tribune called on the National Guard to remove all unvaccinated from society? Wow, that was bat shit crazy,” state senator Mike McKell wrote, in reference to the chairman of the board for the Utah newspaper. Huntsman does not sit on the editorial board, however.

Remember that time Paul Huntsman and the Salt Lake Tribune called on the National Guard to remove all unvaccinated from society? Wow, that was bat shit crazy. https://t.co/pMOgdf6jrl

This is not the first time an editorial board has explicitly called for segregating people based on whether or not they have taken the COVID shots.

Oak Park, Illinois, a liberal suburb that borders Chicago, said it favors “segregating” people based on jab status. It called “deranged” those who have decided not to take the COVID shots.