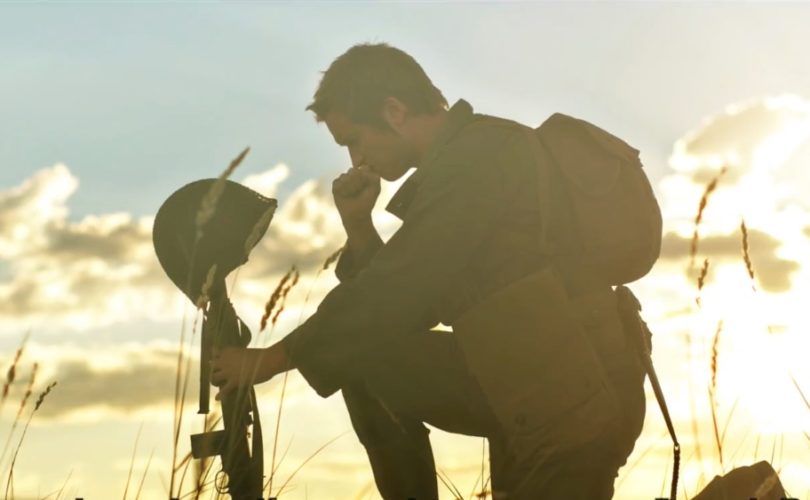 Bishop Olmsted - 'Men, do not hesitate to engage in the battle.' Film still.

Note: The video is below.

The short, created by Blackstone Films, outlines how an epic battle is being waged for the souls of men. At stake is love and relationships, the family, and the very survival of society itself.

Drawing upon his landmark letter issued last September on the same topic, Bishop Thomas Olmsted is specifically summoning the men of his diocese to become the men that God created them to be and to “stand in the breach” against a raging enemy seeking to destroy.

“Men, do not hesitate to engage in the battle that is raging around you,” Olmsted encouraged in his September Apostolic Exhortation to Catholic Men.

“The battle that is wounding our children and families, the battle that is distorting the dignity of both women and men. This battle is often hidden, but the battle is real. It is primarily spiritual, but it is progressively killing the remaining Christian ethos in our society and culture, and even in our own homes,” he wrote.

The film makes it clear that there is a huge problem in the way men today live out their manhood, especially as fathers.

“The average boy will spend more time watching television by the time he turns six years old then he will spend talking to his father over the course of his entire earthly life,” states one man at the opening of the film.

“The responsibility that is really the man's responsibility to be the spiritual leader of the family has been abdicated. We tend not to fulfill our roles as Christian men,” states another.

The film posits that to be a man means to lay down one’s life, to be willing to die for those whom one loves, to love self-sacrificially.

The film posits that to be a man means to lay down one’s life, to be willing to die for those whom one loves, to love self-sacrificially.

“Love is sacrifice. If you want to know that I love you, try to see my sacrifice,” states one man in the film.

It is Jesus Christ from the cross who reveals to men the way they are called to love.

A man becomes who he is truly meant to be and discovers his greatness when he lives out his role — be it biological or spiritual — as “father,” namely of being a caregiver, provider, protector, and defender.

“Fatherhood isn't so much what we're supposed to do, it's what we are,” states a man in the film.

“What makes a man a man and what separates him from all the other animals in the world is that he can order his passions. So, man is always called to have self-mastery,” states one speaker in the film. “When a guy gets hooked on [pornography,] and his passions take dominion over him, he ceases to be the spiritual head of his family, because if he can’t guard his own soul, and lead that soul to heaven, how is he going to guard the innocence of the family that's been entrusted to him?”

“And so, the man’s work of self mastery is the foundational work for being able to give himself away.”

Self-mastery is not merely for the sake of saying ‘no’ to the manifold temptations against manhood, but for the sake of men “harnessing their power for Christ,” to do the work of God, the film argues.

Bishop Olmsted concludes the film by asking men to read his letter “Into the Breach” so that they “will discover the battle that we are engaged in.”

“Be confident! Be bold! Forward, into the breach,” he said.

Bishop Olmsted's letter, “Into the Breach,” is published here.