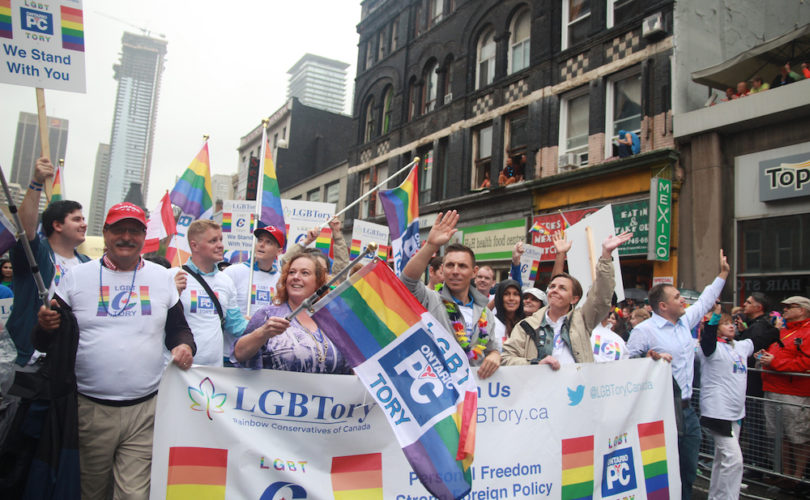 TORONTO, January 27, 2016 (LifeSiteNews) – The activist LGBTory’s push to change the Conservative Party of Canada’s stance on same-sex “marriage” at the party’s policy convention in May could spell disaster for the Tories if accepted, warns Jack Fonseca of Campaign Life Coalition.

“Real conservatives, and I mean those who actually believe in the conservative movement, need to see these LGBTories for what they really are: liberals in sheep’s clothing. They’re not true conservatives,” he told LifeSiteNews in an email.

And pro-family advocates need to push back, get involved in their riding associations, and be elected as delegates to the May convention in Vancouver, Fonseca added.

The Conservative Party of Canada “deleting its pro-family values marriage policy” at that convention “could trigger a string of self-destructive detonations that would ensure the Liberals hold power for another generation.”

Meanwhile, interim Conservative leader Rona Ambrose has signaled her support for the suggested change, as did Alberta’s Conservatives at their policy convention last weekend.

The Ontario-based LGBTory told Ambrose in a January 10 letter that it was seeking the change because erstwhile Conservatives are “repelled by a social-conservative policy on same-sex marriage.”

Ambrose responded Tuesday in a statement to the CBC that the news outlet interpreted as backing the LGBTory position.

“I’ve been clear for a long time that the Conservative Party welcomes all conservatives, regardless of sexual orientation. If you believe in smaller government, lower taxes, balanced budgets and individual freedom, we want you in our party,” she said.

And at their policy convention last weekend, Alberta Conservatives passed a resolution that the two statements be deleted. MP Michelle Rempel described the motion as “a very positive thing and something that’s been very positively accepted,” according to the Canadian Press.

“It is true,” concedes Fonseca, “that a majority of Canadians support same-sex marriage.”

But “very few of them vote on the basis of that issue,” and those voters “open to switching between Liberal/Conservative decide their vote based on jobs, the economy, and relevant foreign policy issues,” he argues.

“The LGBTory’s claim, that by deleting this social conservative policy, it will somehow attract a large number of new voters to the CPC, is total rubbish.”

Moreover, “eliminating this policy could potentially drive away – forever – much of the CPC’s very large base of social conservative party members, activists, donors and volunteers,” Fonseca pointed out, adding that social conservatives make up an estimated 25 percent of the Conservatives’ base.

A “rejection of social conservative policy” at the May convention could also close off “pathways of communications with the very segments of the population that the CPC needs in order to grow” – particularly new Canadians, whose values often include a rejection of same-sex “marriage.”

“Social conservatism cannot be banished from the conservative movement, without destroying the movement,” Fonseca emphasized.

He also noted that Tory policy currently states: “A Conservative government will not support any legislation to regulate abortion.”

LGBTory president Isaiah “Doc” von Lichtenberg acknowledged in his letter to Ambrose that the Tories made no promise to change the legal definition of marriage during three consecutive election campaigns.

And the last time the Stephen Harper Conservatives attempted to deal with the issue was a 2006 failed motion to restore the traditional definition of marriage. (The Civil Marriage Act of 2005 legalized same-sex “marriage” under Liberal Prime Minister Paul Martin.)

“But we cannot escape the fact that the CPC’s official policy is to deny marriage to same-sex couples,” wrote von Lichtenberg.

The Ontario branch of LGBTory formed in March 2015, and three months later, the first official Conservative delegation marched behind the LGBTory banner in the Toronto Pride Parade, a parade that traditionally includes nudity, lewd behavior, and a general atmosphere celebrating any and all sexual preferences and deviances.

Among Tories who marched in the Pride Parade were Ontario’s Progressive Conservative Party leader Patrick Brown, Ontario MPP Lisa MacLeod, and MP Kellie Leitch, rumored to be a contender in the CPC leadership race.

“I’d warn CPC party members reading this that if you let these progressives take over now, you’re setting the CPC up for an eventual collapse like that of the 1993 election under the PCs, which relegated them to a mere two seats in the House of Commons,” Fonseca stated.

“CLC encourages pro-life, pro-family CPC members to stand as delegates in their own riding associations,” he said, “so that their votes can be counted on this policy resolution and on the many others that will no doubt hit the convention floor in Vancouver.”

According to the Canadian Press report, the party’s national executive decides what resolutions will make it to the floor during the May policy convention, and the number of people supporting the motion factors into that decision.

MP Rempel told the Canadian Press that she thinks the resolution will be debated in Vancouver. “There is a quite a bit of interest in this particular resolution and I’d anticipate other riding associations across the country will try to submit similar resolutions or support one single one going to the floor,” she said.

Fonseca also urges pro-family advocates to write leader Ambrose and the national executive members and oppose the suggested change to the party policy on marriage.

Names and contact emails for the CPC national executive are available here.

To join the Conservative Party of Canada or to renew your membership, go here.