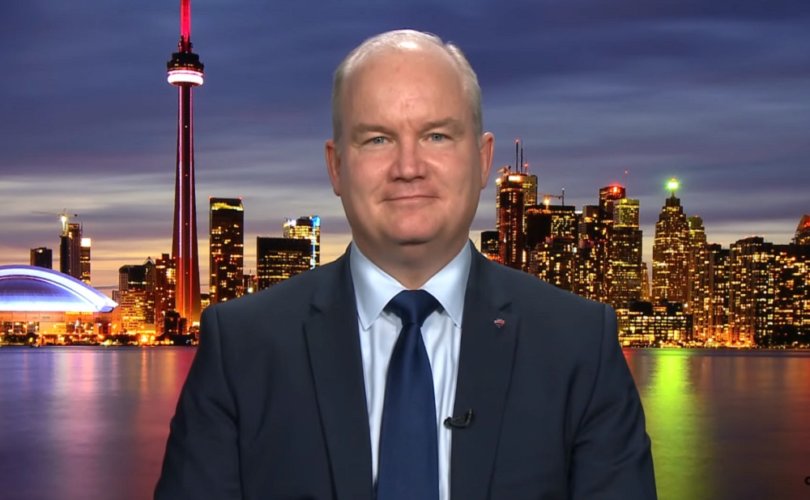 (LifeSiteNews) — Canada’s pro-life and pro-family organization Campaign Life Coalition (CLC) is calling for the immediate removal of pro-abortion Erin O’Toole as head of the Conservative Party of Canada (CPC).

“CLC, which recruited more than 26,000 members in the 2020 CPC leadership race, is calling once again for O’Toole to step down, warning that only ousting O’Toole can save the party from an inevitable collapse similar to the federal PC [Progressive Conservative] Party’s meltdown in 1993,” said CLC in a press release yesterday.

CLC also blasted a decision to suspend a party National Councillor because he started a now-growing petition calling for O’Toole to be replaced as party leader.

“Trying to silence a critic of O’Toole’s disastrous leadership will not save the party,” added CLC.

Chen was suspended this week as a seat holder on the national council of Ontario by party officials. His suspension could last three months.

Chen is behind a petition calling for O’Toole to be ousted as CPC leader. At last count, his petition has garnered over 5,000 signatures. The petition was launched only a few weeks ago, and now has a goal of 7,500 signatures.

Jeff Gunnarson, National President of CLC said O’Toole has already “failed to win a very winnable election because of his foolish strategy of steering the party to the left,” which caused the party to lose two seats in the 2021 election.

Gunnarson said that Chen should not be “suspended” and that O’Toole’s incessant pushing of “pro-abortion and socially liberal views which showed disrespect toward the party’s base” means that the CPC “cannot win the next election with this failed leader at the helm.

LifeSiteNews contacted Chen, who said that the process to suspend him is “personally and politically motivated,” but that he is confident that there will “not be sufficient support for my removal from office.”

“I believe some councillors decided to engage in this process due to personal and emotional motivations and saw the petition as an excuse to exclude someone they did not like,” Chen told LifeSiteNews.

“The clear problem with Mr. O’Toole’s continued leadership is that he has lost a significant amount of trust of those that elected him as leader, and the petition is intended to provide a voice and opportunity for those members to have their voices heard earlier than August 2022.”

A few weeks ago, Chen told LifeSiteNews, “The worst thing that Erin O’Toole did that hurt the members is allowing Justin Trudeau and Jagmeet Singh to take more seats away from us.”

“Aside from the clear lack of integrity, success is also a measurement of leadership, and Mr. O’Toole failed in every metric,” Chen told LifeSiteNews.

CLC’s Director of Political Operations Jack Fonseca said in the press release that if O’Toole is not replaced soon, there will be a “repeat” of the “1993 election in which the PC Party of Canada was almost annihilated.”

Fonseca said this caused the rise of “Preston Manning’s Reform Party which offered a more authentically conservative alternative to the PCs.”

“If O’Toole’s hand remains on the wheel, it’ll be the greatest gift Maxime Bernier could ever have wished for. The PPC will win a pile of seats, all at the expense of the CPC. Liberals will get a fourth term as a result of the vote-splitting. Ousting O’Toole and replacing him with a genuine conservative who respects the socially conservative base is the only winning solution for the CPC,” said Fonseca.

In speaking with LifeSiteNews, Fonseca said the best candidate to replace O’Toole is someone who can “show respect to all the main camps that make up the conservative party’s traditional base, and who won’t be intimidated by the liberal mainstream media.”

Fonseca told LifeSiteNews it is “too early” to say which MP or person would be a good fit to replace O’Toole, but CLC has its eye on “a couple of pro-lifers whom we believe would make excellent leaders.”

Fonseca added that CPC members looking to help get O’Toole booted as the CPC party leader can join the party as a member to ensure they are eligible to vote in the next leadership race.

Fonseca also said that if one’s local MP is a member of the CPC, it is important to “email and write them to request that they vote to remove O’Toole at the first available caucus meeting.”

He also asked all CPC members to sign Chen’s petition as well as contact their local CPC electoral association president to ask its board of directors to write that O’Toole resign.

In early October, the CPC caucus met for the first time and voted to retain the right to be able to remove the party leader or any MP under provisions of the Reform Act of 2014.

A long-term CPC Senator Michael MacDonald said in October that O’Toole’s shift to the left resulted in poor election results, meaning it’s now “necessary” to review him as the leader.

The 2021 federal election was held on September 20 and saw Liberal Prime Minister Justin Trudeau re-elected with a minority government. The CPC under O’Toole won only 119 seats, two fewer than in 2019.

Of the CPC MPs elected, 38 were pro-life candidates.