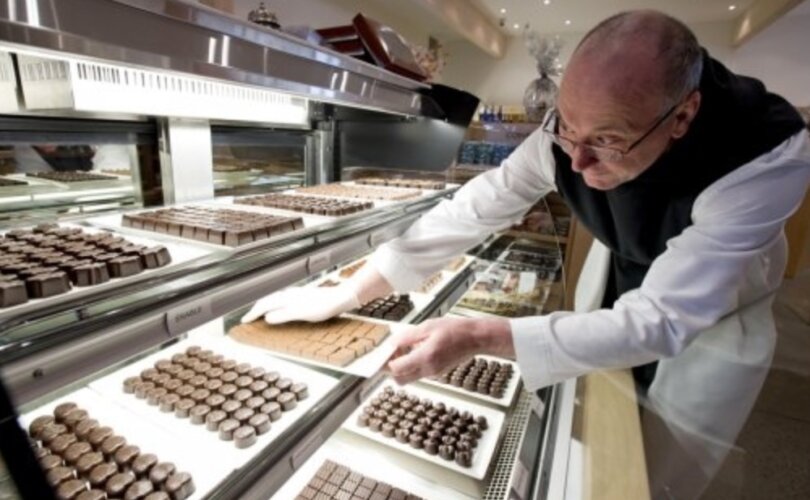 For 30 years, CLC Ottawa has been selling Christmas fruit cakes made by the monks of the Abbey Val Notre Dame. Now the abbey, in consultation with CLC Ottawa, has expanded its selection of Christmas treats available to CLC supporters.

That expanded selection is also becoming easier to purchase. Last year, CLC Ottawa posted the treats on their website. Supporters could then make direct purchases from the website rather than placing their orders by phone or mail.

This change made the fundraiser much easier for CLC Ottawa staff. Last year, one quarter to one third of the orders were placed online. With the abbey now listing its products and receiving orders online, a link on the CLC Ottawa website allowed the abbey to receive orders from CLC supporters directly. The abbey now ships orders for Christmas treats directly to customers, except for a bulk delivery of orders to the CLC Ottawa office for Ottawa supporters.

But last year, there were glitches in the website. It was not easy to switch the page from French to English, so many English-speaking supporters found it difficult to place orders.

Now the website is fixed, and the orders are flowing in.

This year, CLC Ottawa has also added Christmas cards to its online selection of offers.

With all these changes, CLC Ottawa is poised for its best year yet with the Christmas fundraiser.

Fundraising in the time of COVID

Another boost to the fundraiser has been the fact that churches are now open again—after two years of closures and restrictions due to Covid. During Covid, there were no church sales.

No sales, that is, except at the home church of Debbie Duval, CLC National Capital Organizer, based in the Ottawa office of CLC.

Last year, at St. Mary’s Catholic Church in Ottawa, Duval, the stalwart organizer, stood outside the church door after Masses on Saturday and Sunday—in the cold and in the dark—to sell the Christmas cakes, chocolates and other treats.

When some church members complained they had not known in advance about the sale, she told them, “I’ll be back next week.”

Now that church doors are open again, churches and groups such as the Knights of Columbus (a Catholic men’s association) are selling the Christmas treats in high numbers.

And with an expanded selection, the fundraiser is reaching a new clientele of youth and young adults.

“Many of our supporters like the cakes,” says Duval. “But younger people tend not to like them as much.”

“Sometimes churches say, we want only cakes. Then we bring out the chocolates, and they are sold in a moment,” says Duval.

One of the CLC best sellers has been a savory box, filled with hot pepper jelly, an onion confit, rillettes, a fig and date spread, and ten chocolate mice. The contents of this box “are perfect for cheese plates,” notes Duval.

Two Christmas boxes made up by the monks

These Christmas boxes have been “flying off the shelves,” says Duval.

Each summer, Duval attends a family camp close to the abbey. She consults with the monks about products that would be most appealing to CLC supporters.

Most of the high-quality items are made by the monks in the Abbey Val Notre Dame. However, to keep up with the demand, some of the jams are supplied by monks from a Nova Scotian abbey.

Some supporters look to the fundraiser to supply Christmas presents. Duval states that one older woman “just ordered 30 cakes which she plans to distribute to friends as gifts.” A client in Calgary recently purchased $700-worth of CLC treats to distribute as corporate gifts to clients.

To place such bulk orders may make good sense by reducing shipping costs. Shipping to most places in Ontario is $13 and $24 to BC. By placing bulk orders, shipping costs are reduced to approximately ten per cent of the purchase price.

This year, some pro-life groups in Ontario are placing bulk orders for a city or town to reduce shipping costs. With less money spent on shipping, more of the supporters’ money can go to CLC.

According to Duval, the monks give CLC a “good deal” on the products so that the annual fundraiser will bring the pro-life champion much-needed support.

Duval says she “likes a fundraiser like this” because it offers “something delicious” to supporters. What’s more, she adds, “it’s local, and it’s Canadian.”

Duval says she also values the fundraiser because it offers cherished opportunities to connect with supporters. When supporters call for Christmas treats, Duval can chat with them. She says the value of such personal contact “cannot be measured.”

Supporters often donate to the CLC above the purchase price of the items. Duval says, “Sometimes people will tell me, ‘I don’t want anything, but here you go,’ and they will give me cash. Or they will say, ‘Here’s $50 for two cakes’ that cost $42.”

Duval’s dream for the fundraiser? One that is “totally automated” and available at other times of the year.

That dream may come true as early as next year. Says Duval, “We’re hoping for an online sale next Easter.”

About five years ago, Duval began selling Christmas cards in addition to the Christmas treats from the abbey.

“Beautiful religious Christmas cards are hard to find. People were looking for them,” explains Duval.

Duval says she saw this need and decided, “It’s a fundraiser!” She buys 500 boxes of cards at a low rate and resells them to raise funds for CLC.

The cards have been called among the most beautiful religious Christmas cards available anywhere.

And this year, for the first time, the cards are available across Canada. Supporters can purchase the cards online from the CLC Ottawa website, as well. Two boxes of 10 cards go for $18.