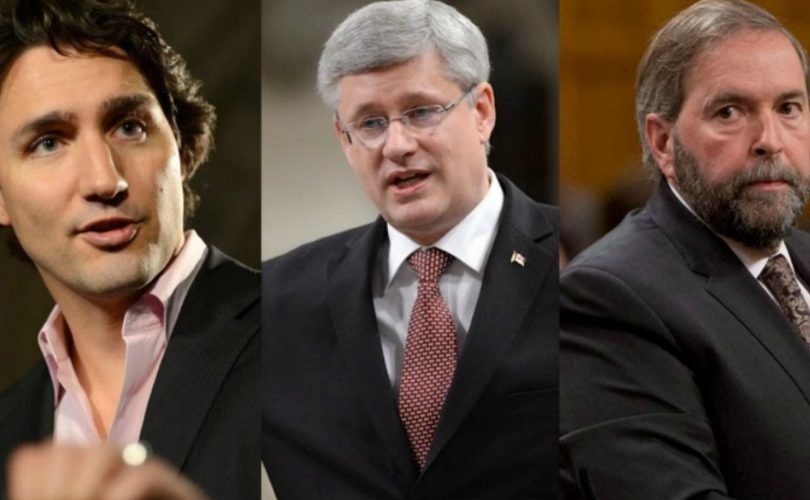 OTTAWA, August 5, 2015 (LifeSiteNews) –With more than 1,000 candidates vying for 338 seats in Canada’s House of Commons on October 19 election day, only a handful more than 100 have been identified by Campaign Life Coalition as solidly pro-life.

Some are sitting Conservative MPs that CLC has labeled pro-life in its just-published 2015 Election Guide based on their voting record; more are Conservative hopefuls whose evaluation is based on interviews by volunteers; and a few are long-shot candidates running for the Christian Heritage Party.

None is from the Liberals, the New Democrats or the Bloc Quebecois, all of which, says CLC project director Jack Fonseca, “are officially pro-abortion, and have banned pro-life candidates, except in the Liberals’ case there are possibly some pro-life MPs who are ‘grandfathered.’”

While the governing Conservative Party of Canada’s leader, Prime Minister Stephen Harper, “is rated pro-abortion,” states the CLC’s analysis of the election, the organization still seems to extend a tacit blessing to the Conservatives.

Explains the CLC analysis: “The Conservative caucus is home to about 100 pro-life or pro-life leaning Members of Parliament. Many of these speak out routinely against the barbaric practice of abortion, including MP Stephen Woodworth (Kitchener Centre), MP Brad Trost (Saskatoon-Humboldt) and many others. The pro-life presence is alive and well within the Conservative caucus. The same cannot be said for the NDP or Liberal parties.”

The analysis goes on to laud “the Conservatives under Harper” because they “have also strongly opposed efforts by the opposition to legalize euthanasia and assisted suicide.”

On the other hand, “the election of either the pro-death NDP or the abortion-loving Justin Trudeau would almost certainly mean bad things for preborn children, and for the elderly and disabled who are the targets of euthanasia.  We would see an increase in ‘abortion access’ and abortion funding with Canadian taxpayer dollars, both at home and abroad.”

Liberal leader Justin Trudeau comes in for special mention, since he not only explicitly pronounced the Liberals’ pro-abortion policy, but exclusively so: to qualify as Liberal candidates, pro-life Liberals must agree to park their principles at the ornate doors of the House of Commons, and support abortion on every vote.

NDP leader Thomas Mulcair, a baptised Catholic like Trudeau, supports the party’s pro-abortion position, although with less flare than Trudeau. CLC’s analysis notes that Mulcair is the front-runner in a tight, three-way race, while Trudeau has squandered last year’s lead with silly public statements and his pro-abortion declaration.

Despite making it more than obvious that a voter who puts life issues first has little choice but the Conservatives, Fonseca insists, “Campaign Life has always called for supporting pro-life candidates regardless of party.” Thus, “if the Conservative candidate is pro-abortion,” Fonseca told LifeSiteNews, “we urge voters to look for an independent, and to see if the Christian Heritage Party has anyone running.”

Fonseca also said CLC has in the past approved of voters with no acceptable candidates turning in their ballot with a line through all the names, and the words, “no pro-life candidate” added by way of explanation. “If there are dozens of these at a polling station, the word will get back to the parties,” he said.

In very rare cases, there may be justification, said Fonseca, to select the “least bad” candidate based on the competitors’ other positions, especially on other life issues such as euthanasia, and family issues such as homosexuality “which is related to life issues at a deep level. Abortion and homosexuality both separate sex from procreation and say that sex between adults is merely about giving them pleasure.”

Not everyone in the pro-life movement agrees with CLC. Robin Richardson doesn’t. He is a onetime Progressive Conservative MP, now a Victoria, B.C., insurance agent and charismatic Christian pastor who has worked diligently to get pro-life candidates nominated in local ridings.

“If you vote for a Conservative who is pro-abortion, you are still helping put into power the party with many pro-life MPs, who keep the issue alive and introduce pro-life motions and bills,” Richardson told LifeSiteNews.

As well, Richardson cautioned against voting for a pro-life independent or CHP candidate. “We lost a seat we could have won in Esquimalt a few elections ago,” said Richardson, “because a Christian Heritage Party candidate took 500 votes away from the Conservative.”

Finally, Richardson notes that “Stephen Harper won’t be Conservative leader for ever. He could be gone soon if he loses the election. The next leader could well be (cabinet minister) Jason Kenney,” who is a strong pro-lifer. The bigger the caucus he leads, the more chance he has of winning the following election.

However, Jeff Gunnarson, vice president of Campaign Life Coalition, argued that Richardson’s approach would essentially make the pro-life movement partisan Conservatives, which he said is “not tenable” for advancing the cause.

“CLC always supports the pro-life candidate first,” he said. “If we were to support a pro-abortion candidate because he is Conservative then goes on to becoming the leader and then Prime Minister, we may end up with a worse situation. The pro-life movement exists to stop abortion.  We are not boosters for political parties. No, this is not a tenable position to have.”

The CLC Election Guide identified 51 pro-life candidates in Ontario, where, according to its analysis, the battle moral conservatives have fought against the Ontario Liberal government’s pansexual sex education curriculum has cost the federal Liberals much-needed support. In Prince Edward Island there is one, in New Brunswick four, in Manitoba ten, Saskatchewan nine, Alberta 13, and British Columbia 11. In the other provinces and territories, as yet, there is none.