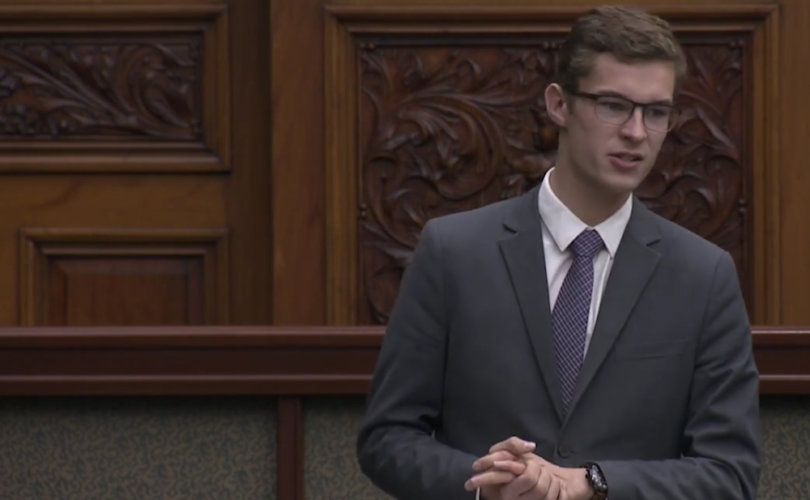 But tonight Oosterhoff is facing a nomination vote that pro-life leaders say is an attack led by the Progressive Conservative Party establishment.

“They’re trying to push Sam out of the PC caucus for the same reasons we love him … he’s unapologetically pro-life and pro-family,” says Campaign Life Coalition, Canada's leading pro-life organization.

“The game being played is clear: get rid of the so-con.”

PC Party second vice president Tony Quirk is challenging Oosterhoff for the nomination in the new riding of Niagara West.

In a surprise political upset, Oosterhoff won the nomination. Quirk, a regional councillor for Grimsby, finished last in a field of four.

A first-year political science major at Brock University, Oosterhoff went on to win a November byelection to become the youngest MPP in Ontario’s history.

With the boundaries of Niagara West-Glanbrook now redrawn, Quirk is trying again in Niagara West, where both men live.

It’s unusual for a sitting MPP to be challenged by another party member, but not against party rules.

Oosterhoff released a statement thanking Brown and “my colleagues in caucus for the outpouring of support that they have shown as this nomination challenge arose,” reported iPolitics.

“They are firmly behind me, and I am looking forward to moving past this and focusing on 2018!” wrote Oosterhoff.

But Campaign Life senior political strategist Jack Fonseca says that despite Brown’s “statement in support of Sam, we believe this is revenge of the PC establishment, and the Red Tory progressives trying to get rid of the so-con.”

Campaign Life rated both Oosterhoff and the 46-year-old Catholic Quirk as supportable pro-life candidates in the September nomination race.

But CLC now describes Quirk on its website as “the candidate being pushed by the establishment to try to unseat Oosterhoff.”

Moreover, Quirk made “some very disturbing comments” in a local newspaper “in which he seems to attack Sam on his social conservative views,” Fonseca told LifeSiteNews.

Quirk told The Voice of Pelham that people have complained to him about Oosterhoff.

“I’m … hearing that he’s not listening to people when they come to him with concerns,” Quirk said.

Oosterhoff will go to events “with his mind already made up,” he added.

“He’ll tell you that’s ‘principled conservatism,’ and that he knows what his principles are. At 19, I would like to think that my principles were different than what they are now,” said Quirk.

Quirk made similar comments in an interview with QP Briefing.

“So he approaches things with the blind faith of a child, and that’s the problem that you have to take into account when you are someone who attends church – faith is important, blind faith is dangerous.”

“In our experience when a politician gives the liberal media these little innuendos, they’re signaling something,” Fonseca pointed out.

These comments “seem to be designed to put Sam in a negative light with respect to his social conservative values.”

Quirk told The Voice of Pelham that he’s against abortion, but on homosexual “marriage” he disagrees with his Catholic faith, which he came to through his wife, Kathryn.

“I have no problem with gay marriage,” said Quirk. “It actually doesn’t affect me personally.”

Campaign Life is mobilizing supporters to back Oosterhoff, Fonseca said.

“We’re endorsing Sam primarily because he’s done such a good job and he deserves to be supported,” he told LifeSiteNews.

“In spite of the terrible hate campaign that the mainstream media has attacked him with, Sam has stood his ground,” Fonseca said. “He hasn’t retreated, apologized or backed down for his beliefs as a person of faith, and a man of reason.”

Moreover, pro-life and pro-family advocates worked hard every step of the way to help Oosterhoff get elected, he added.

“Sam’s presence as a socially conservative voice at Queen’s Park is too precious to lose.”

Fonseca urged all pro-life PC members in Niagara West to turn up Tuesday night to vote for Oosterhoff.

The nomination election will be held March 7 at the West Niagara Agricultural Centre in Grassie. Doors open at 5:30 p.m., registration and voting begins at 6. For more information, go here.