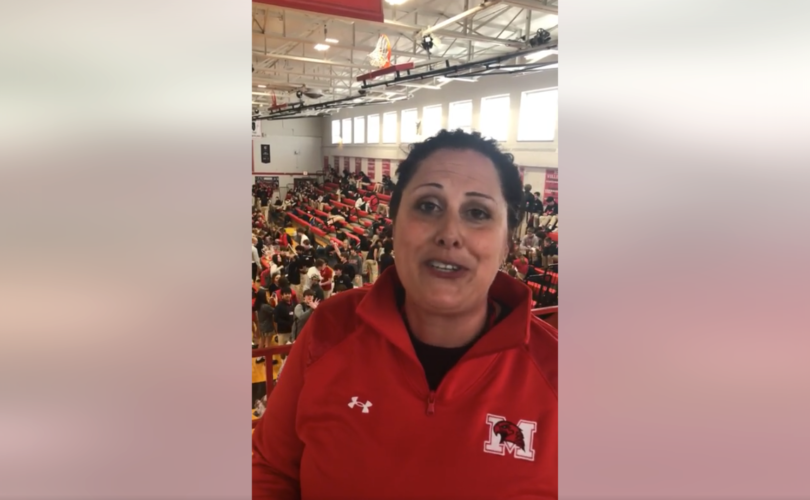 CHICAGO (LifeSiteNews) – The campus minister for a Catholic high school in Chicago is in a same-sex “marriage.”

Kimberly Madonia is the Director of Mission and Ministry for Marist High School. Marist hosted dissident, pro-LGBT priest Father James Martin earlier this month for a discussion on homosexuality and transgenderism.

Madonia has been in the role for a year now after she left her previous job as a youth ministry director for St. John Fisher and Most Holy Redeemer, two Catholic parishes in Chicago. She worked there for 17 years, according to a goodbye letter she posted on Facebook.

Madonia is in a “marriage” to a woman named Melissa Farrell, with whom she is raising two children. Madonia’s Facebook page only shows her and her kids but does not show her with Farrell. However, LifeSiteNews has reviewed Melissa Farrell’s Facebook page, which is full of photos of the two women and the children. The pair have been together at least a decade now, based on Facebook posts made by Farrell.

Comments on the LifeSiteNews article about Martin’s Zoom session with Marist defended Madonia, despite her name never being mentioned in the story.

Posts on Farrell’s Facebook page refer to her being pregnant twice. The Catholic Church teaches that using in vitro fertilization is gravely immoral, as is purposefully creating a fatherless child.

Madonia did not respond to an email on Tuesday from LifeSiteNews that asked if she tells her students she is in a same-sex relationship, if she agrees with the Catholic Church on homosexuality and mortal sin, and if she sees any conflict between being in a lesbian relationship and working as a so-called campus minister.

Principal Megan Dunneback did not respond to questions from LifeSiteNews, either.

The Catholic Church teaches that homosexual acts and same-sex unions are mortally sinful.

“Basing itself on Sacred Scripture, which presents homosexual acts as acts of grave depravity, tradition has always declared that ‘homosexual acts are intrinsically disordered,’” the Catechism of the Catholic Church (2357) explains. “They are contrary to the natural law. They close the sexual act to the gift of life. They do not proceed from a genuine affective and sexual complementarity. Under no circumstances can they be approved.”

The Congregation for the Doctrine of the Faith in 2021 dismissed the idea of “blessing” couples in same-sex unions. The Congregation stated that it is “not licit to impart a blessing on relationships, or partnerships, even stable, that involve sexual activity outside of marriage (i.e., outside the indissoluble union of a man and a woman open in itself to the transmission of life), as is the case of the unions between persons of the same sex.”

LifeSiteNews contacted the Archdiocese of Chicago but did not receive a response by publishing time.

— Article continues below Petition —
STAND with Abp. Cordileone as he bars Nancy Pelosi from Holy Communion until she repents
Show Petition Text
15411 have signed the petition.
Let's get to 17500!
Thank you for signing this petition!
Add your signature:
Show Petition Text

A recent Marist grad told LifeSiteNews that the high school consistently taught content contrary to the teachings of the Catholic Church.

Mark Viz, who graduated in May, told LifeSiteNews that his alma mater talked “about consent for the senior classes” without mentioning sexual immorality or Church teaching.

Marist also “put up posters about consent, all encouraging teens to practice safe and consensual sex without even considering discussing the immorality of premarital sex.”

He said the Father Martin talk represented a “worrying trend” for the school.

But Marist is not the only Catholic school in the area that has rejected the Church’s teaching on homosexual behavior.

Earlier this school year, the Benedictine monks who govern Benet Academy severed ties with the high school because it wanted to keep a lacrosse coach who was in a lesbian relationship.

Benet Academy is in Lisle, located in the Diocese of Joliet.