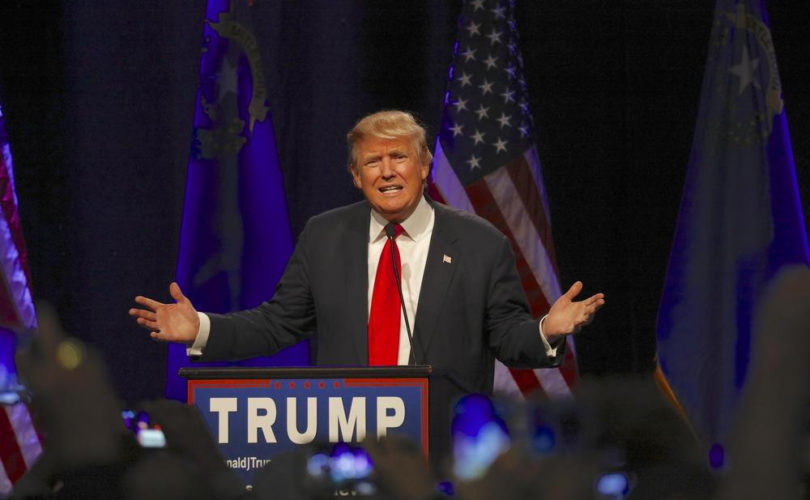 CONCORD, New Hampshire, February 8, 2016 (LifeSiteNews) – Does Donald Trump support the gay agenda or oppose it? On the eve of the New Hampshire primary, observers are still scratching their heads about where the GOP frontrunner actually stands.

Trump has repeatedly and consistently said he supports the natural definition of marriage, but can a President Trump be relied on to promote it resolutely and cogently? It is this question that has many marriage activists expressing concern about his increasingly likely hold on the GOP nomination.

In fact, the National Organization for Marriage has gone so far as to say that Trump has “abandoned” the pro-marriage cause.

Trump himself underscored the problem on the weekend when he told a New Hampshire television station that from the White House he would push “equality” for homosexuals even further forward.

A cable news reporter self-identifying as a lesbian asked him last Thursday after a rally in Exeter, “When President Trump is in office, can we look for more forward motion on equality for gays and lesbians?”

“Well, you can and look – again, we're going to bring people together. That's your thing, and other people have their thing,” Trump told Sue O’Connell of New England Cable News. “We have to bring all people together. And if we don't, we're not gonna have a country anymore. It's gonna be a total mess.”

Following the comments, Trump appeared Sunday on ABC’s This Week program with George Stephanopoulos and would not commit to appointing Supreme Court justices who’d overturn Obergefell, though that would be his “preference.”

STORY: ‘Anyone but Donald Trump’: Here’s his record on life, marriage, and religious liberty

Trump’s comments follow his statements during a Fox News Sunday interview last week, when he said, “If I'm elected, I would be very strong on putting certain judges on the bench that I think maybe could change things, but they've got a long way to go.”

“[Marriage] should be a states rights issue,” Trump continued. “I can see changes coming down the line, frankly.”

When asked by Fox if he “might try to appoint justices to overrule the decision on same-sex marriage,” Trump replied, “I would strongly consider that, yes.”

The real estate mogul criticized the Supreme Court for the Obergefell decision imposing homosexual “marriage” on all 50 states last June, but then later in August, Trump voiced support to NBC News for banning companies from firing employees on the basis of sexual orientation. “I don't think it should be a reason” to fire workers, he said at the time on Meet the Press.

The National Organization for Marriage (NOM) and a number influential evangelicals have endorsed Senator Ted Cruz in the race for president. The Texas senator has not only committed to appointing pro-marriage justices, but says the president and the states can rightly defy the “fundamentally illegitimate” ruling just as President Lincoln defied the Dred Scott decision.

NOM has also been highly critical of Trump, saying he has “abandoned” their cause. The organization said in its January 27 blog post just prior to the Iowa Caucus that “Donald Trump does not support a constitutional amendment to restore marriage to our laws. Worse, he has publicly abandoned the fight for marriage. When the US Supreme Court issued their illegitimate ruling redefining marriage, Trump promptly threw in the towel with these comments on MSNBC: ‘You have to go with it. The decision's been made, and that is the law of the land.’”

NOM had said the week before that Trump “has made no commitments to fight for marriage, or the rights of supporters of marriage to not be discriminated against and punished for refusing to go along with the lie that is same-sex 'marriage.'”

The latest CNN/WMUR tracking poll shows that overall 33 percent of likely Republican primary voters support Trump, giving him a growing 17-point lead over the nearest GOP contender. RealClearPolitics polling average in the state puts him at 31.0 percent support, with Marco Rubio second at 14.7, John Kasich third at 13.2, and Ted Cruz fourth at 12.7.