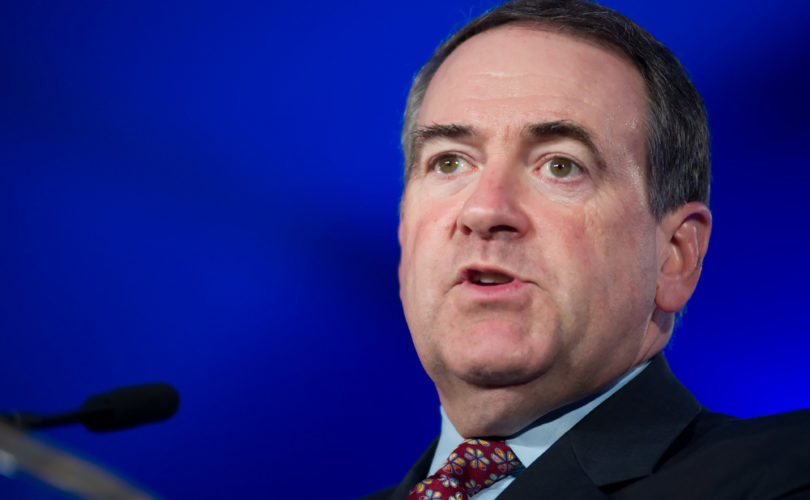 “At the end of every political speech, most of us say, 'God bless America,'” the former Baptist minister said in his closing statement. “But how can he do that when we continue to slaughter 4,000 babies a day?”

The crowd greeted his remark with sustained applause before he continued.

“I want to be the president that treats every person, including the unborn, as a person, and protect them under the Fifth and Fourteenth amendments of the Constitution.”

Huckabee has previously said that he takes a “bolder” position on abortion and would interpret the Constitution to protect all people from the moment of conception. At a previous debate last April, he said, “The next president ought to invoke the Fifth, and Fourteenth Amendments to the Constitution now that we clearly know that that baby inside the mother’s womb is a person at the moment of conception.”

Huckabee closed by quoting a 100-year-old man he met in East Texas.

“He said this to me, 'I sure wish, Mike, we had the days when The Ten Commandments were in all of our capitals and in every school, and we prayed again,'” he said. “You know, he may be 100 years old, but I believe some of those old ideas to get this country back – where we unapologetically get on our knees before we get on our feet – might be the best solutions we've ever sought as a country.”

Huckabee, who won the 2008 Iowa caucus in a surprise upset over John McCain and Mitt Romney, has seen his support dwindle, as leading evangelicals and social conservatives have endorsed Sen. Ted Cruz.

Huckabee told local Iowa radio late last month that he is likely to drop out of the presidential race if he does not finish among the top three candidates in the state next month.

The latest poll shows him tied for eighth place in Iowa with Ohio Gov. John Kasich.