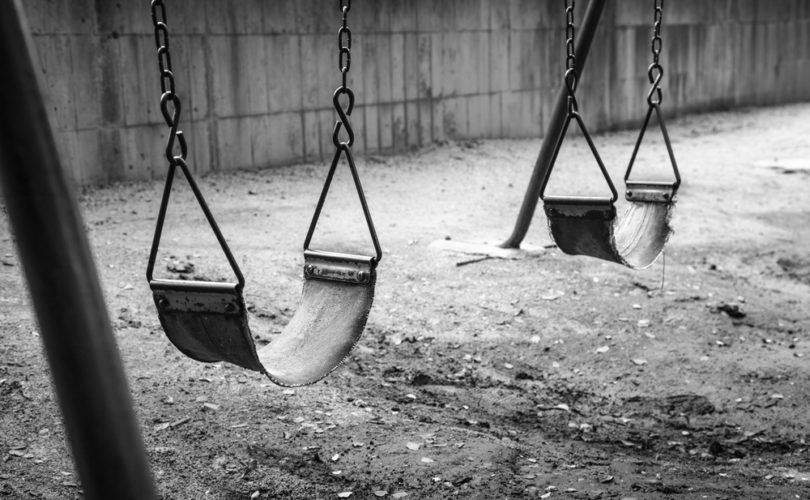 WASHINGTON, D.C., April 19, 2017 (LifeSiteNews) – Oral arguments were heard before the Supreme Court today in a case concerning state funding for a Missouri preschool’s playground equipment that has religious liberty implications for people of faith nationwide.

The fundamental issue at hand is whether a state can exclude religious individuals or organizations from secular public benefit programs, according to the Alliance Defending Freedom (ADF). It also concerns a historically anti-Catholic constitutional provision used to deny a state grant.

ADF attorneys represent the Columbia, Missouri, church that operates Trinity Lutheran Child Learning Center. The state had excluded the church from a program that provides a partial reimbursement grant for rubberized surface material from recycled tires for children’s playgrounds.

The surface material increases safety for children and was intended for use on the church’s preschool playground, which the entire community uses.

More than 90 percent of the children who go to the preschool do not attend the church. Additionally, the preschool has an “open gate” policy with the playground. Children in the neighborhood frequently use it after hours and on weekends.

The preschool was denied the grant for its playground based solely on the playground belonging to a religious organization, according to ADF. The grant denial came even though the State of Missouri ranked the center one of the top qualifiers for the program (fifth out of 44 nonprofit applicants).

The legal nonprofit contends in the case that based upon the First Amendment the government cannot exclude religious organizations from government programs that provide purely non-religious benefits.

“The government should treat children’s safety at religious schools the same as they do at non-religious schools,” said ADF Senior Counsel David Cortman. “The government isn’t being neutral when it treats religious organizations worse than everyone else. Equal treatment of a religious organization in a program that provides only secular benefits isn’t a government endorsement of religion, but unequal treatment that singles out a preschool for exclusion simply because a church runs the school is clearly unconstitutional.”

ADF said as well that based on the state’s logic, the government could deny churches access to any non-religious public benefit, including fire services or water treatment.

The director of the Child Learning Center at Trinity Lutheran Church appeared with ADF attorneys at a press conference after the oral arguments on Wednesday. Annette Kiehne thanked the Supreme Court justices for hearing the case.

“Here is something you learn very quickly, working with children: A kid is a kid. Playground time, for a child, is about play,” Kiehne said. “And play should be safe; safety shouldn’t hinge on whether a child is religious or they are playing on a playground at a religious school or at a secular or public institution.”

“We aren’t asking for special treatment,” continued Kiehne. “We are just asking to not be treated worse than everyone else.”

While the case concerns a Lutheran school, it has particular interest for Catholics as well as implications for people of all faiths. This is because Missouri state officials cited the Blaine Amendment section from the Missouri Constitution prohibiting government aid to religious institutions.

The Blaine Amendment is named for former Speaker of the House and U.S. Secretary of State James G. Blaine. It bans the use of taxpayer funds at “sectarian” schools. Blaine attempted to amend the U.S. Constitution  in 1875 but failed.

However, forms of Blaine’s amendment were “added to state constitutions in order to enforce the nativist bigotry of the day” against Catholics, a Cardinal Newman Society report on material from The Becket Fund for Religious Liberty said.

Blaine Amendment provisions are currently found in the constitutions of 37 U.S. states, and are apparently being interpreted to discriminate against non-Catholics as well.

Rassbach said further that if the Supreme Court upheld the state’s argument, “It would be open season on Catholic institutions.”

Missouri Gov. Eric Greitens announced reversal of the policy last week. Greitens directed the state’s Department of Natural Resources to allow religious organizations to apply for and be eligible to receive those grants, according to The Kansas City Star.

“We have hundreds of outstanding religious organizations all over the state of Missouri who are doing great work on behalf of kids and families every single day,” Greitens said in a statement. “We should be encouraging that work. So today we are changing that prejudiced policy.”

The Republican governor said he didn’t think his order would impact the Trinity Lutheran case.

Aside from the religious liberty element, the case is being watched for the implications of how the Supreme Court will rule with Gorsuch on the bench.

The Court is expected to issue a ruling by the end of June.