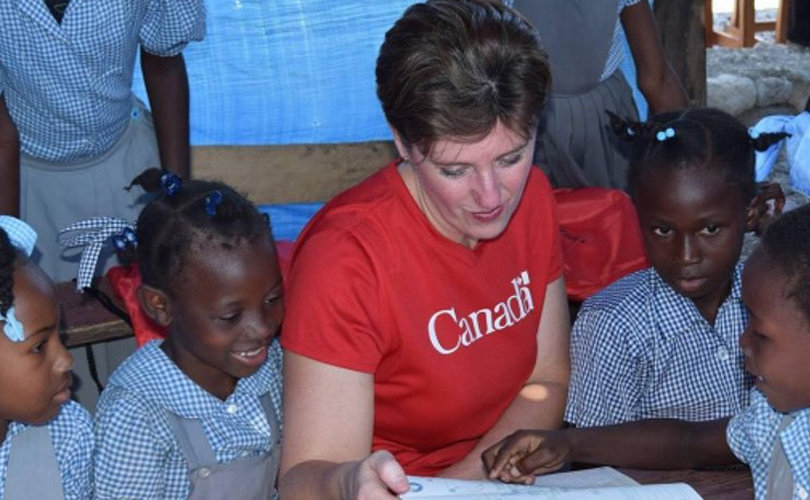 It's “a decidedly feminist vision that will transform our international assistance,” she added.

“In many countries, a mix of discriminatory laws and policies, coupled with inadequate services and harmful cultural practices, limit the sexual and reproductive health and rights of women and girls,” the full official policy states. The results of these “discriminatory” laws often include “a lack of comprehensive sexuality education and family planning services [and] restricted access to contraception and safe abortion.”

“Across the globe, 225 million women do not have access to the contraception methods of their choice,” said Bibeau. “Every year more than 22 million women and teenaged girls undergo unsafe abortions and every nine minutes one of them dies because of it.”

Campaign Life Coalition, the political arm of Canada's pro-life movement, criticized the policy for claiming to promote human dignity while promoting the killing of pre-born children through abortion.

“The government is arrogantly preaching about human dignity while promoting the killing of children before birth,” Matthew Wojciechowski of Campaign Life Coalition told LifeSiteNews. “There is nothing dignified about crushing the skulls and ripping apart the limbs of babies in the womb whether it’s in a sterile Marie Stopes facility or in a clandestine clinic.”

“We urge the Conservative official opposition to speak out against this government’s misplaced priorities,” continued Wojciechowski. “If they want to empower women and girls, and provide real assistance in hopes of a sustainable future for all people, the Liberal government should stop spreading division around the world by funding abortion, and instead, redirect all that money and their efforts towards non abortion-related aid.”

The “Feminist International Assistance Policy” comes three months after the Canadian government promised to spend $650 million to increase abortion globally. The new policy is being promoted as a mechanism through which the Canadian government seeks to cooperate with and reach the United Nations Sustainable Development Goals, which include pro-abortion language on “universal access to sexual and reproductive health-care services, including for family planning.”

In order to “support positive health outcomes for women and girls in developing countries,” Canada will support more abortion and contraception, the policy states.

“Canada will support increased access to a full range of health services, including family planning and modern contraception; comprehensive sexuality education; safe and legal abortion, and post-abortion care; and prevention and treatment of HIV/AIDS and sexually transmitted infections,” it says.

“A feminist approach solidly anchored in the achievement of gender equality and the empowerment of women and girls is the best way to reduce poverty and create a world that is more inclusive, more peaceful, and more prosperous,” said Bibeau.

Under the project's “human dignity” umbrella will be “development projects” that offer “healthcare, specifically, sexual, reproductive, and psychosocial healthcare,” she said.

“I will remind you that on March the 8th, we announced a commitment of $650 million over three years to significantly improve the initiative for women and newborn health by offering a full range of sexual and reproductive health, including education, family planning, contraception, safe abortions, and post-abortion care,” continued Bibeau. This includes “defending all the rights that are associated with those actions.”

The $650 million pro-abortion programs will “be delivered by experienced partners from Canada, recipient developing countries and global organizations,” the policy states. LifeSiteNews was unable to locate anywhere online a list of organizations the Federal government plans to partner with to deliver these services.

A video shown at the press conference stated the new policy “advances gender equality and the empowerment of women and girls.” The pro-abortion policy will “refocus Canada’s international assistance on helping the poorest and most vulnerable,” the video stated.

Bibeau repeated the government's promise of $650 million for international abortion advocacy again during her speech, adding, “I want to remind you that this means we are doubling our investments in this area.”

This foreign policy initiative is the “most ambitious and progressive in the history of Canada’s diplomacy,” according to Bibeau. Its announcement means it's “a great day for the world’s poorest and most vulnerable women and girls.”

“For 10 years, the Conservatives muzzled Canada on the international stage,” said Bibeau. “Our country’s government failed to champion women’s rights. Only two percent of our bilateral assistance was allocated to projects whose primary objectives were gender equality and the empowerment of women. It was high time to take a good look, a hard look at the situation and adopt a new plan – a more ambitious plan, a more feminist plan.”

The “Feminist International Assistance Policy” will also “support women’s leadership and decision-making in climate change mitigation and adaptation efforts.” It promises to “ensure that the government’s climate-related planning, policy-making and financing address the particular challenges faced by women and girls.”

When “women's rights” are respected, the rights of other marginalized groups will be better respected, Bibeau said. One such group she listed was people who are marginalized based on “sexual orientation.”