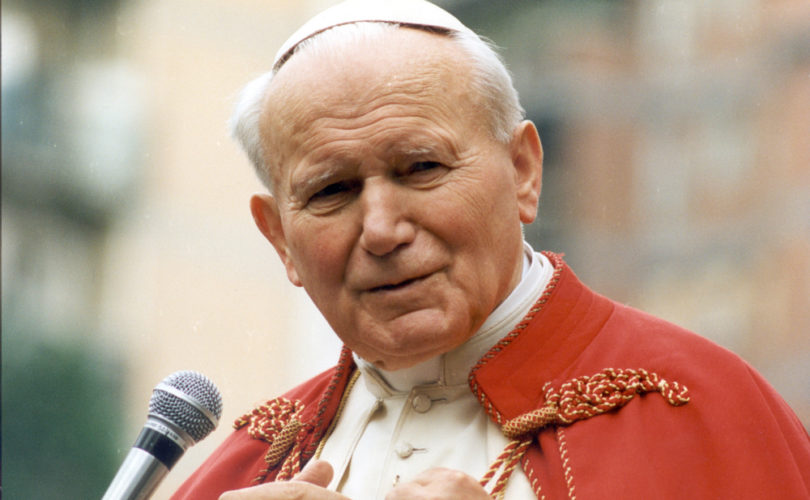 Despite the opposition of atheist groups and the reservations of a minority of Liberal and New Democratic MPs and senators, Canada has passed legislation making April 2 Pope John Paul II Day.

First introduced in the House of Commons in 2011 by Toronto-area Conservative MP Wladyslaw Lizon, the law’s preamble lauds the long-serving pope and newly-minted saint for his “vital role in promoting international understanding and peace,” his inspiration of youth, his visits to Canada, especially for World Youth Day in 2002, and his leadership in the struggle “to end communism in Eastern Europe.”

“I was there in Poland,” Lizon told LifeSiteNews, “for Pope John Paul's first visit. He gave everyone a boost of energy. We came away with the conviction that something can be changed. That people did have power.”

Lizon, a mining engineer who immigrated from Poland in 1988, a one-time president of the Canadian Polish Congress, and a founding member of Tribute to Liberty, the organization building a national monument in Ottawa honoring the victims of communism in the world, called his bill’s proclamation a “proud but very emotional moment.”

He added, “Pope John Paul II presented a valuable message of courage, a defense of freedom and profound statements of hope and commitment to all people.”

Most parliamentarians apparently agreed: only 42 MPs – all New Democrats – voted against the bill last year, while 217 supported it. One notable opponent in the Senate recently was Liberal Serge Joyal, who claimed the Catholic Church and Pope John Paul II opposed equal rights for women and homosexuals.

“I don't want to be too negative in relation to that,” said Joyal, “but the doctrine of the Church is simple: Women should defer to men as Church defers to God. Hence, women in the Roman Catholic Church are not able to have any responsibility to the altar, no ordinance and no capacity to manage at the upper level. It is a man's world. And there is the undercurrent, when you read the teachings, that sin entered the world through women.”

Outside Parliament, his thinking was echoed by secular humanists such as the Centre for Inquiry, which gathered 3,000 signatures on a petition against the bill, and Hemant Mehta, the high school mathematics teacher who blogs as the Friendly Atheist.

Mixing fact and fantasy, Mehta called the pope a “figurehead,” and indicted him for his “anti-abortion views,” and opposition to same-sex “marriage” as if they were personal opinions rather than millennia-old Church doctrine,  and finally for his hostility to “condom use in AIDS-ravaged Africa.”

Though Mehta (who once purported to sell his “soul” on e-Bay) is a fixture on the atheist circuit touting science over blind faith, he appears to have missed the very strong case made by scientist Edward C. Green, whilst still head of Harvard’s AIDS Prevention Research project, that campaigns promoting condoms in Africa help spread this and other sexually transmitted diseases there rather than reduce them.

As well, it is hard not to suspect that Mehta is confusing Pope John Paul II with his successor Benedict XVI, who sparked a furore (and Green’s comments) in 2009 with his science-based reservations about condom campaigns in Africa.

While Mehta conceded that Pope John Paul “did speak up” against totalitarian communism, it was only so that he could then claim that this stands in “piquant” contrast to Catholicism’s “totalitarian” views towards sex.

In fact, Pope John Paul II did more than “speak up.” He is credited with a major role in bringing down communism in Poland, thus knocking over the first of many dominoes in the Warsaw Pact’s slave-state system.

Lizon believes those who opposed the bill are wrong on several counts, not least in their failure to realize how much suffering communism caused. “The death toll alone was 100 million,” he said.

As for the allegations against the Catholic Church, Lizon said, “Pope John Paul II Day was intended to be about his achievements above and beyond religious matters. I don’t think you will find he ever said anything against the equality of gays.”

“Pope John Paul II proved that nothing is impossible. He stood up for populations that were oppressed by totalitarian regimes. He will be remembered for his role in the collapse of several stifling dictatorships, and for the way he inspired peaceful opposition to Communism in Poland, leading to its eventual collapse in Central and Eastern Europe.”