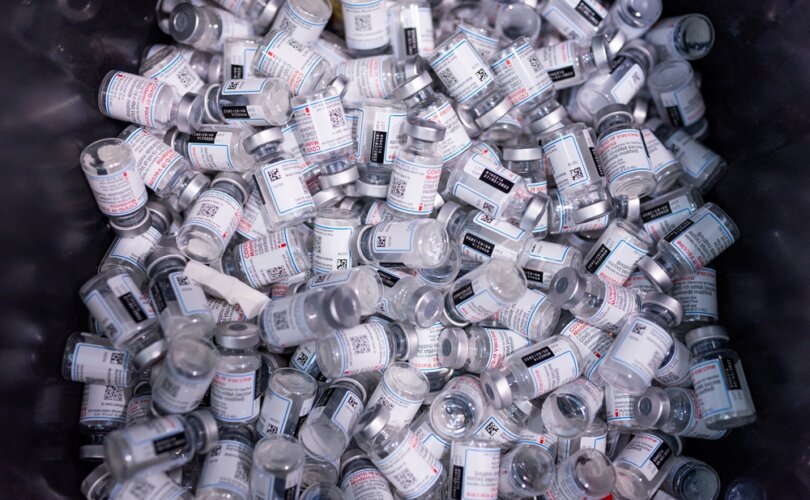 OTTAWA (LifeSiteNews) — The Canadian government has discarded almost 25 million doses of COVID-19 shots from various manufacturers as demand for inoculation against the novel coronavirus has plummeted.

The National Post reported Friday that 7.7 million doses of Moderna’s mRNA-based COVID shot have now been disposed of after reaching their expiry date, up from 1.2 million discarded doses in June. Federal government data show a further 3.1 million Novavax COVID jabs have also been thrown out from an order of 9.7 million, alongside 13.6 million doses of AstraZeneca’s serum. However, the total number of discarded vaccines may be higher, for the data set does not account for shots which expired after being delivered to provincial governments.

Of the 9.7 million Novavax vaccines purchased, only a fraction, just 117,000, were ever distributed, while the majority of the nation’s 20 million AstraZeneca shots were left in storage after reports confirmed the Oxford-designed vaccine had been linked to dangerous blood clotting.

Indeed, studies have indicated that COVID vaccines are much more likely to cause injuries than to protect from infection with the virus, particularly in young adults. A recent study from Germany found “strong associations” between COVID inoculation and a drop in fertility.

“The implementations of these [vaccination] programmes in both Germany and Sweden coincide very well with a distinct change in fertility levels exactly nine months later,” the study reads, adding that “[t]he fertility rates remained at a reduced level during the entire first half of 2022.”

The vast stockpile of the Canadian government’s AstraZeneca shots were later tossed after expiring, though they had been offered to Gavi, a global vaccine drive established in 1999 by the Bill and Melinda Gates Foundation to distribute vaccines in developing countries.

When the federal government pledged the AstraZeneca shots to COVAX, Gavi’s international COVID shot resource pool, the organization said it was “already working to distribute large volumes” of the shot “with recipient countries,” and therefore refused to accept the additional pledged doses.

However, Health Canada spokeswoman Charlaine Sleiman said at the time that, rather than dealing with a mere surplus of donations, a “limited demand for the vaccine and recipient country challenges with distribution and absorption” were to blame for the lack of uptake.

In all, the Canadian government spent over $9 billion ($6.8 billion USD) on securing more than 500 million COVID shots (150 million of which were Pfizer and Moderna’s mRNA jabs) despite any of the vaccines passing clinical trials, leading Conservative MP Kelly McCauley to accuse the Liberal government of incompetent leadership.

Canada has seen a marked slowdown in the uptake of endless COVID booster shots. Whereas initially the vast majority of the population, some 85 percent, took the first shot, and a similarly high 82 percent consented to the second, convincing citizens to continue being inoculated against the virus has not been as successful, with under 50 percent of eligible Canadians receiving any further booster doses, according to the Government of Canada website.

Only 14.3 percent have taken a fourth shot.

Vaccine demand around that world has slowed, with Moderna CEO Stéphane Bancel stating in comments made at the World Economic Forum’s Davos 2022 summit in May that the pharmaceutical firm had thrown out 30 million doses of their own shots as “nobody wants to take them.”

“We have a big demand problem,” Bancel said, explaining that though the massive pharmaceutical company has tried to urge vaccine uptake in other countries “through the embassies in Washington,” Moderna has discovered that “nobody wants to take them.”

Likewise in India, a major drug manufacturer disposed of 100 million doses of the Covishield vaccine, India’s version of the AstraZeneca shot, due to limited uptake. Reports noted that the government was unable to distribute the vast quantity of shots despite having offered them for free to over 75s as part of a 75-year independence anniversary initiative.

By the summer, the U.S. had tossed a staggering 82.1 million COVID shot doses due to lack of demand.