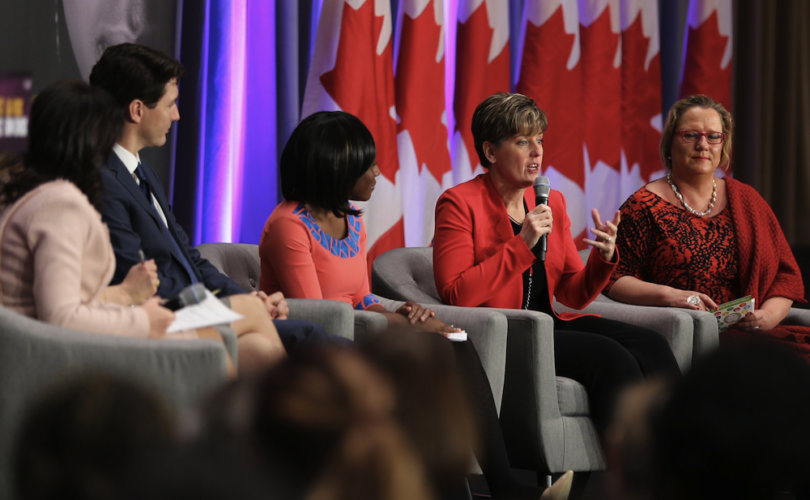 OTTAWA, March 10, 2017 (LifeSiteNews) — Canadians will pay for campaigns to legalize abortion in dozens of countries under the Liberal government’s $650 million, three-year commitment to improve “sexual and reproductive health and rights” worldwide.

Women around the world “are denied legal control over their bodies and reproductive health,” Trudeau said.

“That is why we will continue to place gender equality and rights, and the empowerment of women and girls, at the heart of our international development work.”

Pro-life groups have condemned the Liberal global abortion fund, which will come from Canada’s existing aid budget, according to a Global Affairs Canada FAQ background document.

The $650 million is over and above Canada’s 2015 to 2020 commitment of $3.5 billion to improve maternal, newborn and child health in developing countries, the document stated.

The fund will “build on and address gaps” in the maternal health initiative “by protecting and promoting the sexual and reproductive health and rights of women and adolescent girls.”

And that includes financial support for “removing judicial and legal barriers to the fulfilment of sexual and reproductive health and rights.”

The public ministry document details what Canada’s $650 million will bankroll as part of its development aid:

This doesn’t surprise Matt Wojciechowski, who oversees Campaign Life Coalition’s portfolio as a non-governmental organization (NGO) at the United Nations.

“The push for ‘sexual and reproductive health and rights’ always comes in a package,” he said, adding that Canada’s listed foreign policy goals in this case are similar to the “business model” of abortion giant Planned Parenthood Federation of America.

“First you sexualize children and remove their inhibitions through comprehensive sexuality education, which is even more radical than Ontario’s Wynne sex-ed,” Wojciechowski told LifeSiteNews.

“Then you provide them with unlimited free low-quality contraception.”

“After the abortion, you give them more contraception, and sooner or later, they get pregnant again and the deadly cycle continues,” added Wojciechowski. “Not to mention, their increased sexual activity puts them at a higher risk of infection and HIV.”

Meanwhile, “pro-abortion NGO’s and UN agencies’ activists and lobbyists continue to pressure and bribe local and national governments to liberalize their abortion laws to remove all barriers that limit their deadly work.”

“And of course, all this work isn’t cheap,” added Wojciechowski.

“So that’s where abortion-obsessed Justin Trudeau, and the often unaware and unsuspecting Canadian taxpayer, comes in.”

Wojciechowski emphasized that parents’ rights are also under attack.

“After foreign government laws, the biggest barrier to pro-abortion activists in pushing their agenda forward is good old-fashioned Mom and Dad,” he said.

“That’s why abortion advocates lobby so hard to give the state and the local Planned Parenthood abortion center the power to usurp the natural rights of parents to raise and protect their children.”

The language the Liberals are using is politically significant, says Dr. Rebecca Oas of the Center for Family and Human Rights (C-Fam).

“The phrase ‘sexual and reproductive health and rights’ (SRHR) is highly controversial in international institutions and has not been accepted or clearly defined in any global consensus document,” said Oas, who is associate director of research at C-Fam’s New York headquarters.

“While we’ve had the phrases ‘sexual and reproductive health’ and ‘reproductive rights’ since the 1994 International Conference on Population and Development, they were defined there as including abortion only where legal in accordance with national laws,” she told LifeSiteNews in an email.

“Furthermore, the terms were kept separate to avoid creating the formulation ‘sexual rights,’ which could include such things as sexual orientation and gender identity issues.”

Moreover, the phrase “women’s control over their own bodies” could refer to “important efforts to protect women and girls from violence (including sexual violence), forced marriage, human trafficking, and female genital mutilation,” she said.

But the term “is more often used by feminist groups to imply a right to disconnect the act of sex from reproduction, such that any consensual sexual act is a matter of human rights, as is the destruction of the resulting child by abortion.”

That control over one’s body could refer to chastity is a concept “highly controversial to ‘sexual rights’ advocates, and unlikely to be promoted by groups applying for funding from Canada's new initiative,” added Oas.

The Global Affairs FAQ document claimed that “[c]urrently, 225 million women worldwide have an unmet need for modern contraception and there are more than four million unintended pregnancies every year.”

Oas pointed out that “unmet need” is a “misleading concept.”

“Of those 225 million women, only about five percent cite lack of access for the reason they aren’t using modern contraceptives,” she wrote.

“Far more of them are personally opposed, claim they have sex very infrequently, or have concerns about the health risks associated with family planning methods,” she added.

“In other words, there’s very little unsatisfied demand within the concept of ‘unmet need,’ and little indication that the women described as having a ‘need’ have any intention of becoming contraceptive users,” Oas stated.

“Rather, we have millions of women living according to their own priorities, not those of the family planning organizations that invented the ‘unmet need’ concept as a tool for advocacy.”