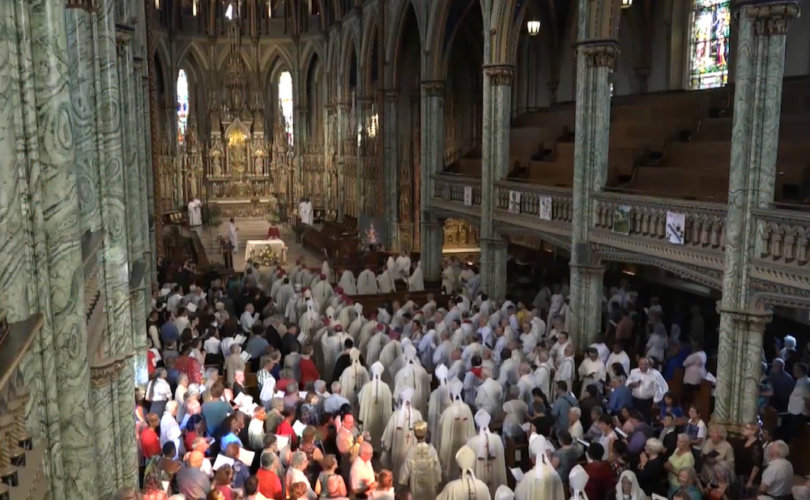 Canada's reconsecration Mass to Our Lady

OTTAWA, September 28, 2017 (LifeSiteNews) — Three cardinals led Canada’s bishops in a reconsecration of their country to the Blessed Virgin Mary on Tuesday during the bishops’ fall plenary.

The reconsecration took place during Mass at Ottawa’s Notre Dame Cathedral and marked the 150th anniversary of Canada’s confederation.

Cardinal Gérald Lacroix of Quebec; Cardinal Marc Ouellet, prefect of the Congregation for Bishops in Rome and former archbishop of Quebec, and Toronto Cardinal Thomas Collins stood near a portrait of Our Lady of Canada as they led some 80 bishops in the consecration prayer.

“Mary our Mother, we place our country Canada in the sanctuary of your Holy Heart for we know that there we will find Jesus, who lives and reigns with the Father in the unity of the Holy Spirit, one God, forever and ever,” they prayed.

It was also the feast of the Canadian Martyrs: eight French Jesuits, including St. Jean de Brebeuf and St. Isaac Jogues, who were tortured and killed by the Mohawks between the years 1642 and 1649.

“We can literally say our country was founded by saints,” Lacroix said in a homily.

“The Gospel they brought from Europe was not only in Bibles and in books; it was deeply rooted in their lives. They were bearers of the Good News. And that is why they were able to witness faithfully and persevere in the midst of many trials.”

The bishops also marked 50 years since the Canadian Conference of Catholic Bishops founded its international aid organization, Development and Peace.

Archbishop Gerard Pettipas of Grouard-McLennan told the Catholic Register the bishops were looking to the “Blessed Mother to watch over and guide us as a people” at a time when “our country is going through some very significant changes as a society.”

Canada was first consecrated to Our Lady during the in 1947 Marian Congress in Ottawa, billed as the biggest religious gathering ever held in North America.

The reconsecration of Canada to the Immaculate Heart of Mary comes on the 100th anniversary of Our Lady’s appearances at Fatima, Portugal.

It also comes at a time when bishops have issued conflicting region-based pastoral directives in response to Canada legalizing euthanasia, a decision the CCCB and individual prelates decried in strong terms.

The bishops of Alberta and the Northwest Territories released a document that stressed pastoral accompaniment but insisted priests be clear with euthanasia seekers they would be committing a gravely sinful act.

The Atlantic bishops’ guidelines, however, gave priests wide latitude in deciding whether to grant the sacraments to Catholic euthanasia seekers, and a church burial.

Quebec’s Archbishop Marc Lepine and Lacroix did not issue pastoral directives but distanced themselves from the Alberta guidelines.

The Quebec bishops favour granting a Catholic burial for those who chose to be euthanized, although Lacroix has said he draws the line at allowing this for Catholics notorious for supporting euthanasia.

The bishops of Alberta and Northwest Territories also issued a strong defence of Church teaching regarding Communion for divorced and civilly remarried Catholics, in response to Pope Francis’ Amoris Laetitia.

No other bishop appears to have done so, even as controversy deepens over the apostolic exhortation, with the latest development a “filial correction” of Pope Francis signed to date by 146 Catholic scholars, priests and prominent laypersons.

Rather, the document seems “especially urgent and needed in Canada” because of the gulf between the “lived experience of couples and families” and the Church’s teaching, as well as the rising influence of the “culture of death,” Ouellet said.

The cardinal cited abortion, euthanasia, contraception, same-sex “marriage” and divorce as examples of “culture of death,” the Register reported.

Also during the plenary, the bishops elected Bishop Lionel Gendron of Saint-Jean-Longueuil, Quebec, as new president of the CCCB, and Archbishop Richard Gagnon of Winnipeg, Manitoba, as vice president.

The plenary continues until Friday.