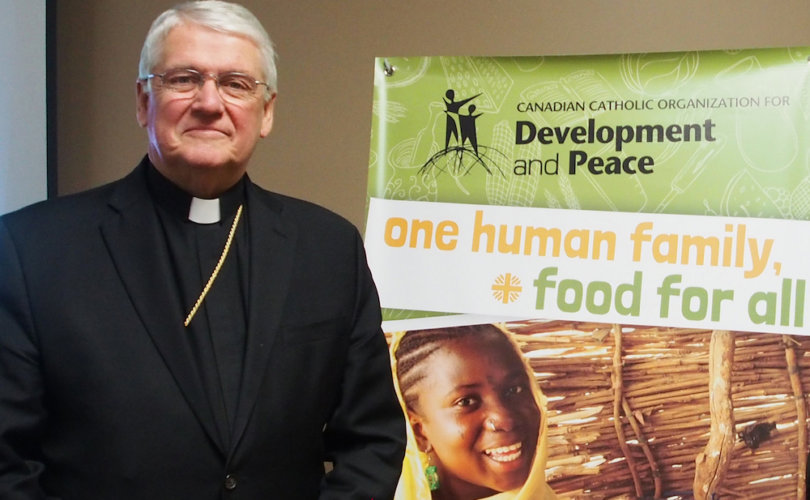 Hamilton Bishop Douglas Crosby is the president of the Canadian Conference of Catholic Bishops.Flickr.com

The Canadian Conference of Catholic Bishops sent a strongly worded letter to Foreign Affairs Minister Chrystia Freeland on June 29 after the minister told the House of Commons earlier that month the Liberals have put abortion and “sexual reproductive rights” at “the core” of Canada’s international commitments.

Freeland also stated the Liberals were seeking a two-year seat on the United Nations Security Council to globally promote access to abortion, which she described as a “Canadian value.”

But the bishops blasted Freeland’s statement “erroneous, confusing and misguided,” and rebuked the Liberals for pushing a “political ideology” and “particular” brand of feminism while disregarding the genuine needs and convictions of people in the developing world.

“And if the dignity of women is to have a universal moral foundation it cannot be based on principles that override the rights of the unborn child.”

The Liberals’ global abortion advocacy contradicts Freeland’s statement that “it is clearly not our role to impose our values around the world,” the bishops pointed out.

And they repudiated her contention that abortion is a “Canadian value.”

The seven Supreme Court justices who struck down Canada’s abortion law as unconstitutional in 1988 also ruled unanimously that “the state has a legitimate interest in protecting the unborn,” the bishops wrote.

They warned Canada’s international role will be “deeply compromised” by the Liberals pushing global abortion rights.

“[H]as Canada forgotten that for a considerable population (both within Canada and abroad) the unborn child is regarded as a human being created by God and worthy of life and love?” noted the bishops.

“We question whether it is wise or responsible to claim abortion advocacy and ‘sexual reproductive rights’ as the core of Canadian foreign policy — as national values with which to enlighten others — knowing full well that they are not only legally contentious but completely contrary to the deeply held convictions of many both within and without Canada’s borders.”

They also blasted the Liberals for “a very particular understanding of feminism.”

Freeland’s outline of Canada’s foreign policy “passed over in silence” many global injustices faced by women, including female infanticide, lack of education or protection from rape and other forms of abuse.

“Canadians recognize these as grave violations of human rights — indeed, as heinous crimes in certain instances — far more readily and unanimously than opposition to abortion and artificial contraception,” wrote the bishops.

“If we add to all of the above the fact that abortion and certain kinds of contraceptive technologies carry profound risks for women, including psychological and emotional harm, sterility, and even death itself, it is difficult to comprehend how the policy agenda you have advanced truly represents the interests of women, particularly those that are already at risk.”

The bishops further excoriated the Liberals for funding abortion advocacy when Canada should be doing much more to respond to genuine need, particularly the impending famine in parts of Africa, which the UN is “already” calling “the largest humanitarian crisis since World War II, with 20 million people at risk of starvation.”

In March, the Liberals pledged $650 million over three years “to facilitate abortion advocacy and sexual reproductive rights on a global scale,” the bishop wrote.

That amount “contrasts sharply” to the Liberals’ pledging only $119.25 million for humanitarian relief for people suffering from food shortages in South Sudan, Yemen, northeast Nigeria, and Somalia.

“Should this unfolding disaster not have prompted the Prime Minister to prioritize relief and aid over politicking at the lavish expense of hardworking taxpayers in Canada?” wrote the bishops.

“[P]olitical ideology cannot be allowed to dictate foreign policy and override common sense and our humanitarian responsibilities to those in dire need.”

“I am grateful to Bishop Crosby for his strong statement opposing the Trudeau government’s misplaced priorities and for highlighting the contradictions within their current foreign policy,” Hughes told LifeSiteNews.

“Our Liberal government is determined to spread their aggressive pro-abortion agenda around the world, and they are using Canadian taxpayer dollars to do so,” he added.

“I applaud the Canadian bishops for speaking out against this form of ideological colonialism and I encourage all faithful Catholics to do the same.”