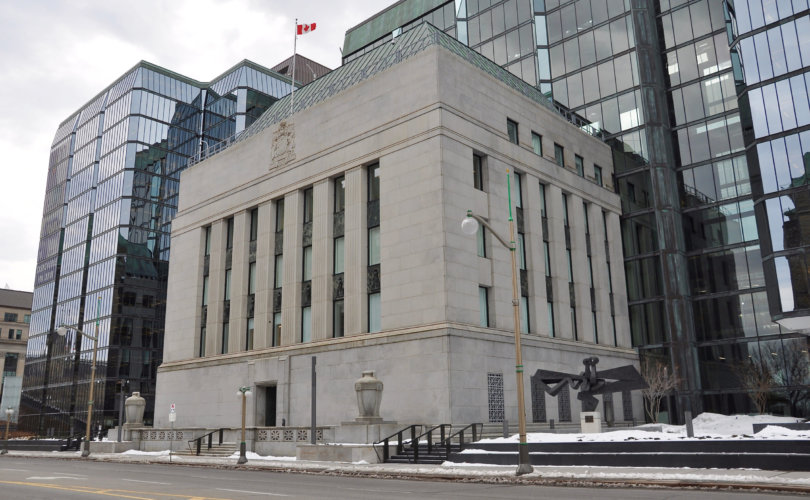 OTTAWA (LifeSiteNews) – According to records obtained by the Canadian Taxpayers Federation, while soaring inflation was crushing the purchasing power of the average citizen, the Bank of Canada paid out a whopping $45 million dollars in raises and bonuses to its employees.

“Why is the Bank of Canada patting itself on the back and handing out millions in bonuses and pay raises while Canadians are struggling to pay for groceries and gas?” asked CTF Federal Director Franco Terrazzano upon learning of the BoC’s massive expenditures.

“If its objective is to keep inflation low, then it doesn’t make sense for Canada’s central bank to hand out bonuses and pay raises while the cost-of-living soars,” added the director.

Looking specifically at how the $45 million dollars were spent, the records shows that the Bank of Canada gave generous pay raises during both 2020 and 2021, while the rest of Canadians were struggling with lockdowns and other COVID-era restrictions.

In 2021, the Bank of Canada spent an additional $5.2 million in pay raises, slightly less than the year before, but increased their total bonus payouts to a shattering $18.4 million.

As noted by the CTF, this type of reckless spending – the Bank of Canada’s total inflation of the money supply exceeded $300 billion during the so-called pandemic – often has a direct inflationary impact on consumer prices.

“At best the Bank of Canada failed to keep a lid on rising prices and at worst it drove inflation by printing hundreds of billions of dollars out of thin air,” commented Terrazzano. “The Bank of Canada says it gives bonuses for successfully meeting or exceeding expectations. So why are they getting millions in bonuses when they admit that they failed to hit inflation targets?”

“The Bank of Canada should reverse these pandemic pay hikes and make it clear that it will not be handing out pay raises or bonuses in 2022,” demanded the director.

While Trudeau’s Liberals and the mainstream media often point to external factors such as the Russia-Ukraine crisis or COVID-19 as the reason for soaring inflation, critics have consistently pointed to the “reckless” deficit spending by Prime Minister Justin Trudeau and the money-printing by the Bank of Canada used to fund said debt as the true causal factors.

In January, Conservative MP Pierre Poilievre tweeted that “Trudeau’s record-breaking deficits and tax hikes on fuel and wages are inflating prices,” while demanding that his government “tell us what it will do today to reverse the rising cost of living.”

Trudeau’s record-breaking deficits and tax hikes on fuel and wages are inflating prices.

His government must tell us what it will do today to reverse the rising cost of living.#JustinFlation

“Inflation keeps rising. And for this we have to thank Trudeau, Freeland, and the @bankofcanada’s incompetent apparatchiks who printed hundreds of billions to fund the Liberals’ gigantic deficits. You will pay for it,” added People’s Party of Canada leader Maxime Bernier.

Inflation keeps rising. And for this we have to thank Trudeau, Freeland, and the @bankofcanada’s incompetent apparatchiks who printed hundreds of billions to fund the Liberals’ gigantic deficits. You will pay for it. https://t.co/hJ1kqkTMS0