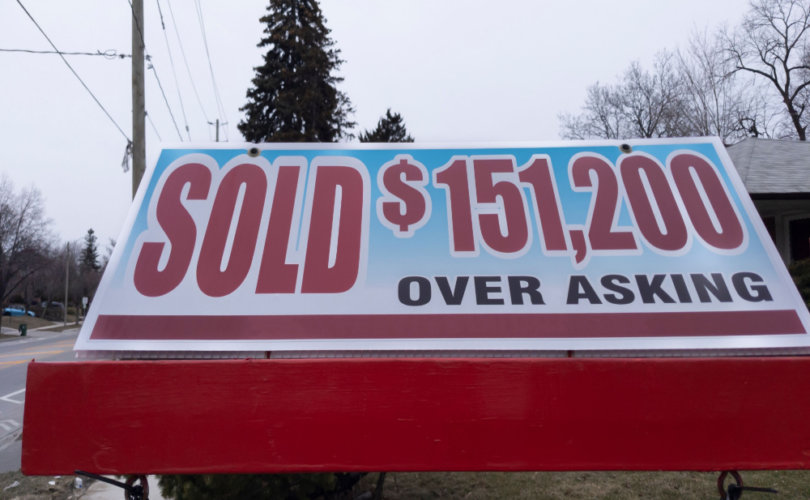 (LifeSiteNews) — Amid massive inflation and interest rate hikes, the Bank of Canada is warning homeowners that their mortgage payments may increase by 30 percent or more over the next few years.

The Bank of Canada, the nation’s central bank, warned those who bought homes during the COVID-19 so-called pandemic on Thursday that even the slight increase in mortgage rates that occurs when the central bank raises rates will likely result in monthly payments increasing by hundreds of dollars a month.

“Even as the average household is in better financial shape, more Canadians have stretched to buy a house during the pandemic,” Bank of Canada Governor Tiff Macklem said Thursday. “And these households are more exposed to higher interest rates and the potential for housing prices to decline.”

According to the Canadian Broadcasting Corporation, home prices increased by roughly 50 percent during the COVID-era, with artificially low interest rates allowing Canadians to leverage even more debt than before to acquire homes.

As a result, nearly one-in-five Canadian households is considered “highly indebted,” meaning their debt-to-income ratio is 350 percent or higher.

For reference, before the pandemic, only one-in-six homes were in that much debt, and in the late 1990s that number was a mere one-in-14.

According to the central bankers, the interest rate for mortgages by 2025 will be at 4.4 and 4.5 percent for variable and fixed rate mortgages, respectively. This represents a 2 percent increase from where rates are today.

Those with variable rate mortgages may experience an increase of as much as $800 a month.

Inflation, interest rate hikes, and cost of living has been a hot button issue in Canada in recent months, particularly in the lead-up to the Conservative Party of Canada leadership vote that takes place in September.

While Prime Minister Justin Trudeau and other left-leaning politicians have attempted to blame COVID-19, the Russian-Ukraine conflict, or any number of other things for skyrocketing inflation in the housing market and consumer goods, Conservative Party leadership candidate Pierre Poilievre has consistently pointed to the deficit spending and “money printing” done under the Trudeau government.

Poilievre also has questioned whether the Trudeau government’s role in creating inflation through massive government spending is intentional, given Trudeau and his Finance Minister Chrystia Freeland’s ties to the World Economic Forum, whose “Great Reset” agenda says that by 2030 “you’ll own nothing and you’ll be happy.”

“[T]hat’s the agenda of these people,” Poilievre remarked last summer when talking about housing prices and inflation. “Maybe that’s why over the last year they’ve done everything in their power to make housing completely unaffordable so that nobody can afford it except them … ”

The pro-life candidate for leadership, Leslyn Lewis, has also condemned the Liberal Party’s ties to globalist organizations like the WEF and the World Health Organization, promising she will ensure Canada’s sovereignty if elected.