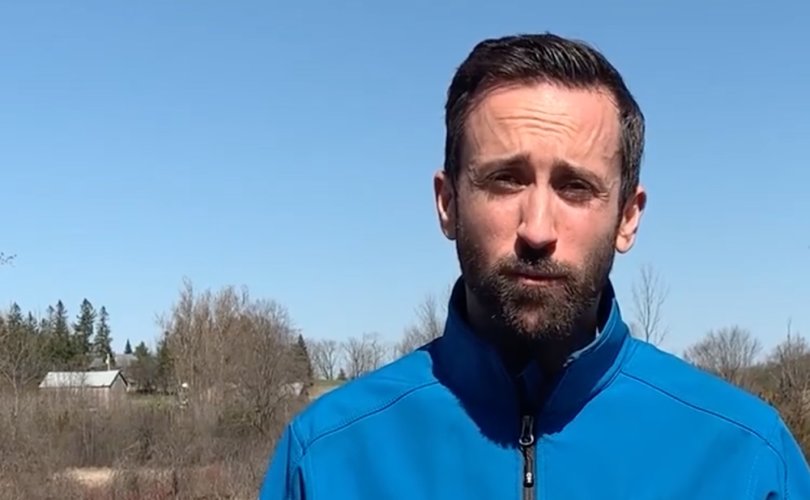 OTTAWA, Ontario, May 1, 2020 (LifeSiteNews) – Canada’s top pro-life organization says that if the Conservative Party of Canada ousts Member of Parliament (MP) and leadership candidate Derek Sloan for standing by his criticism of Canada’s top doctor over her alleged mishandling of the coronavirus pandemic, it could destroy the party.

Pro-life Conservative MP Sloan sparked a media frenzy last week for saying in a letter and video that Canada’s Chief Medical Officer Dr. Theresa Tam, should be fired for her coronavirus response.

“Does (Tam) work for Canada or for China?” said Sloan in his video, adding, “the World Health Organization (WHO) parroted Chinese misinformation coming out from the Communist Party of China.”

Tam, who has served as Canada’s top health official since 2017, has direct ties to the World Health Organization (WHO). She is one of seven people who sit on the Independent Oversight and Advisory Committee for the WHO Health Emergencies Programme (IOAC).

The Toronto Star first reported that the 36-member Conservative party Ontario caucus voted for Sloan to issue an apology for his Tam remarks, in a closed-door meeting held Tuesday. The same report noted that if Sloan refused to apologize, he could be thrown out of the party.

Campaign Life Coalition (CLC) political operations director Jack Fonseca told LifeSiteNews that should the Conservative Party indeed oust Sloan for not apologizing for his remarks, it could destroy the party.

“I would warn Conservative MPs that ousting Sloan from either the leadership race or his place in their ranks as an MP, would turn their Conservative Caucus into a Conservative Carcass.  They would kill the party by so thoroughly demotivating the CPC’s natural, small-c conservative base, that they would be guaranteeing Justin Trudeau wins the next election,” said Fonseca.

“A huge portion of the base would give up on the party, believing it has become too corrupt, and so, in the next election, they will stay home on e-day, not vote, not volunteer, not donate, and not recruit their friends, relatives and members of their churches to vote Conservative.  Be smart, MPs. Don’t follow the foolishness and self-destruction of Scheer and Rempel.”

In a statement sent out Wednesday afternoon, Sloan clarified his remarks, but refused to offer an apology to charges that he was “racist.” He said that when he asked in his video if Tam works for Canada or China, it was meant to be a “rhetorical question.”

“I did not – and I am not – questioning Dr. Tam’s loyalty to Canada. There was no intention to question it,” said Sloan.

Sloan then reiterated his call for Tam to resign.

“I remain greatly concerned that Dr. Theresa Tam still holds the position of Chief Public Health Officer of Canada. With such a disastrous work track record, I once again call for her to step down immediately.”

A CBC report said its source told them it was Ontario Conservative MP Scott Reid who put forward a motion calling on Sloan to issue an apology for his remarks.  The same report says that Sloan and conservative leadership candidate Erin O'Toole were the only ones to vote against the motion.

In a string of Tweets late Thursday, MP Scott Reid spoke about his displeasure that someone was leaking caucus meeting notes to the media. He said that like it or not Sloan did offer a “retraction” of his remarks. He then went on to infer that the only one to gain from ousting Sloan is another leadership candidate.

“Under the CPC’s preferential ballot system, the 2nd-ballot preferences of Sloan supporters could determine who becomes our next leader. Someone wants to get rid of him. Thus, even if we don’t know who leaked, we do know why, and for whose benefit,” said Reid.

“If an MP leaked this, then that MP—not Derek Sloan–should be the one facing expulsion. And if a leadership candidate authorized his team to make the leak, then he should be reconsidering whether he is fit to lead the part,” he added.

Conservative MP Michael Chong, who criticized Sloan for his Tam remarks, created The Reform Act, which allows MPs to remove someone from their party with a majority vote via a secret ballot. To allow for a vote, a total of 20 percent of the caucus members must call for it.

Fonseca told LifeSiteNews that Sloan’s remarks were not “even remotely racist.” He thinks certain MP’s with “red tory” agendas are wanting him out because of this pro-life and pro-family position.

“I assure you that even the liberal journalists and MP Michelle Rempel don’t believe it was racist, but were merely seizing on an opportunity, any opportunity, to try to block a pro-life, pro-family candidates from taking over the reins of the party,” said Fonseca.

“It doesn’t matter if they have to resort to defamation, slander, lies, or distortions. For dishonest leftists like them, the end always justifies the means.”

Fonseca added that the main person to blame for the backlash against Sloan is Calgary MP Michelle Rempel. She criticized Sloan in a series of Tweets on April 21.

“The real villain in this story which has damaged the reputation of the Conservative brand is Calgary MP Michelle Rempel. She has dragged the party through the mud with her false charges against her colleague and via her collusion with the Media Party,” said Fonseca.

“For real justice to be seen, some Conservative MP ought to now collect 25 signatures to force a caucus vote on expelling Rempel for all the damage she has inflicted on her own party, and on the broader conservative movement”.

Sloan’s comments last week were met with a flurry of backlash from both the pro-abortion Prime Minister of Canada Justin Trudeau, as well as some of his fellow Conservative MPs such as Michelle Rempel.

Sloan fought back claims from many, including from Trudeau, that he is a racist in a statement he released late last week.

In response to a question about Sloan’s comments, Trudeau said: “Intolerance and racism have no place in our country. Canada has succeeded because of our diversity.”

Conservative Party of Canada leader Andrew Scheer said this past Monday that he does not agree with Sloan and his call to fire Tam. He denounced Sloan despite earlier saying he would not comment on “individual statements or positions that leadership candidates take.”

“I do not agree with his position, with what he said. That is not the position of our caucus,” said Scheer in a response to a question asking him if Sloan’s comments were racist.

On Monday, Scheer did not say whether he would be expelling Sloan from the party but instead stated he will leave it up to party members to decide Sloan’s fate.

“In the context of a leadership race, our members will make decisions as to what they ultimately want to see in terms of the direction of the party,” said Scheer.

Despite the calls from many that Sloan should apologize, Chinese Canadians from the group “Let’s Vote,” have voiced their support for Sloan in calling for Tam’s resignation.

Xiwen Luo, a member of the group from Calgary, said in a video posted last week on the “Let’s Vote” YouTube channel that he supports Sloan.

Luo then said Trudeau should not label Sloan as a racist.

Maxime Bernier, who served as a cabinet minister under Prime Minister Stephen Harper before splintering and founding the People's Party of Canada, spoke out against the Sloan situation in a April 30 Tweet.

“These are the same LibCons who paid Kinsella to attack me and our PPC team from all ethnic and religious backgrounds and call us racists and white supremacists. Bunch of pathetic hypocrites.”

Pro-life Richard Décarie, who was barred from the leadership race, with no official reason given, also voiced his support for Sloan on Twitter.

“When your leadership campaign slogan is “Without Apology” you already have your answer!”

The Conservative Party leadership race was suspended in late March due to the coronavirus. On Wednesday, the party’s Leadership Election Organizing Committee (LEOC) set an August 21 date to end the race. Party members will be voting via mail-in ballots, which will be sent out to members in July.

CLC is asking for all pro-life, pro-family Canadians who are 14 years of age or older to purchase a Conservative Party membership by the May 15 deadline so that they can vote for the new leader.