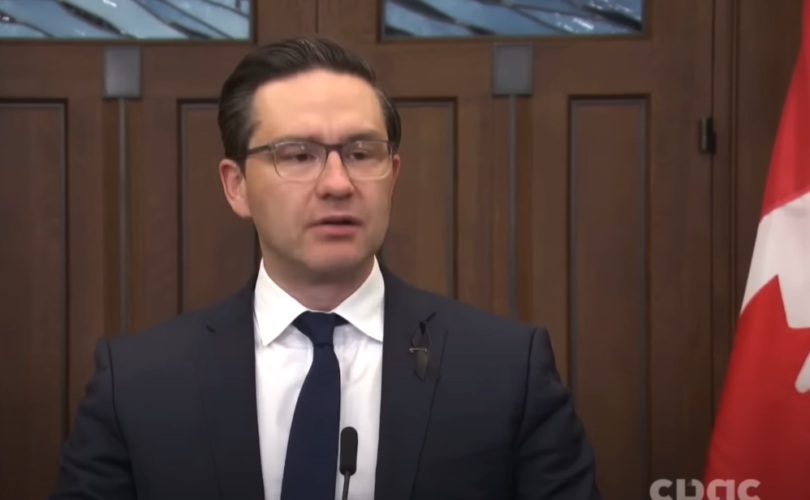 OTTAWA (LifeSiteNews) – If a Canadian federal election were held today, the Conservative Party of Canada (CPC) under its new leader Pierre Poilievre would beat out the Liberals under Prime Minister Justin Trudeau, according to a new poll.

The Liberal-inclined pollsters at Abacus Data found that 35 percent of respondents would vote for the CPC under Poilievre, with only 30 percent voting for Trudeau. In third place is the NDP at 17 percent, with the Bloc Quebecois showing nine percent of the votes.

Conducted after Poilievre was announced the winner of the CPC, the poll also found that the People’s Party of Canada under Maxime Bernier has four percent support.

Overall, the poll shows that the CPC under Poilievre has most of the support in all prairie provinces. In Alberta, he has 56 percent support, with 51 percent in both Manitoba and Saskatchewan.

In British Columbia, Poilievre has 33 percent support, which would give his party the lead in that province.

In Ontario, Poilievre has 38 percent support, which would mean a CPC victory in that province is more than likely.

However, the poll also shows that while there is much more support for the CPC under its new leader, many don’t have the highest regard for Poilievre himself.

A total of 34 percent of poll respondents overall said they had a negative view of Poilievre, with only 29 percent saying they had a positive view of him.

Yet another poll conducted by Leger from September 16 to 18, 2022 shows that 34 percent of Canadians would vote for Poilievre, with 28 percent opting for Trudeau.

On September 10, the CPC elected Poilievre, who serves as an MP in Ottawa-Carlton, to lead the party after he took home 68 percent of the vote on the first ballot. CPC MP Leslyn Lewis came in third with an impressive 9.7 percent, behind Jean Charest at 16.07 percent.

While Lewis was the sole pro-life candidate in the running with the full support of Campaign Life Coalition (CLC), the group’s president Jeff Gunnarson noted that Poilievre had promised free votes for MPs on matters of conscience.

“Although he continues to support abortion, promised free votes for MPs on matters of conscience, to promote the choice of adoption, and to defend pro-life crisis pregnancy centres from Liberal attacks,” noted Gunnarson.

Poilievre ran on a platform saying he would remove “gatekeepers” and work hard to target inflation. He also said he would go after the influence the World Economic Forum (WEF) has on MPs.

— Article continues below Petition —
PETITION: Demand the Conservative Party apologize for not resisting Trudeau's COVID regime
Show Petition Text
2237 have signed the petition.
Let's get to 2500!
Thank you for signing this petition!
Add your signature:
Show Petition Text

However, during the height of COVID, he notably did not speak out on COVID lockdowns of jab mandates, something for which Bernier has called him out.

Poilievre, whom no doubt had support from grassroots social conservatives, left out Lewis from his shadow cabinet. Instead, he filled his cabinet with MPs with anti-life and pro-LGBT voting records.

Dan McTeague served as a Liberal Party MP for many years until 2011, and he recently said Poilievre would beat Trudeau come the next election.

“I think Mr. Poilievre, as long as he stays true to what he’s campaigned on, I think it’s a winning combination,” McTeague noted in a video posted over the weekend.

McTeague, who now serves as the president for Canadians for Affordable Energy, said that the Trudeau Liberals should be “worried because they have no one who’s fresh.”

Unless Trudeau’s minority-led government fails, Canadians will not head to the polls until 2025.

As for Poilievre, he has already been targeted by Trudeau-funded Canadian media.

Last week, Global News reporter David Akin showed his Liberal Party bias when he continually heckled Poilievre during his first press conference as the leader of His Majesty’s Royal Opposition.

As for Trudeau, a viral “#TrudeauMustGo” hashtag has reached the number one trending political topic on Twitter.