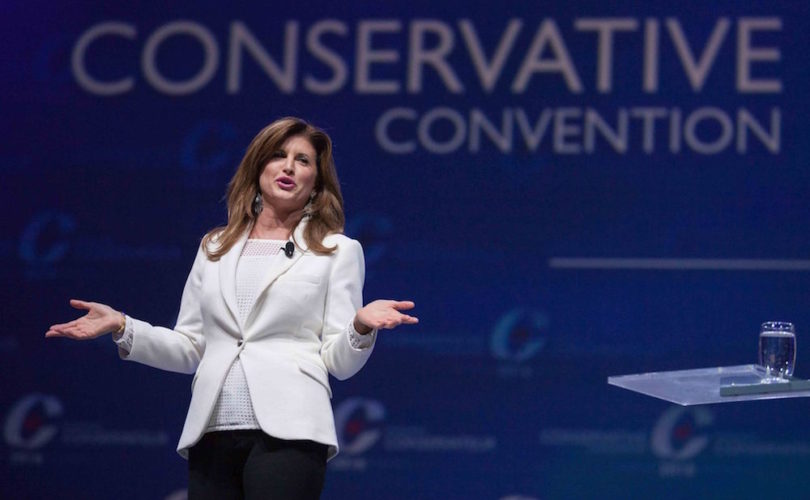 VANCOUVER, May 30, 2016 (LifeSiteNews) — Conservative Party delegates voted overwhelmingly at their Vancouver convention this weekend to delete the party’s longstanding policy defining marriage as between one man and one woman.

But they also voted in policies condemning sex-selection abortion as discrimination against women, and to uphold conscience rights for medical practitioners to refuse to participate in and refer for abortion, euthanasia, or assisted suicide.

And a resolution to delete the party’s opposition to legalizing euthanasia and assisted suicide didn’t even make it to the plenary, but was defeated in Friday’s breakout session, 213 to 94.

“With respect to life issues, this was an enormously successful convention,” says Jack Fonseca, senior political strategist for Campaign Life Coalition, and Ontario delegate. “The Conservative Party platform has become more pro-life than ever.”

By adopting the policy condemning sex-selection abortion, the Tories are now the only mainstream party that explicitly condemns abortion in some form, he told LifeSiteNews.

Moreover, “a pro-life amendment was embedded in the party’s Constitution,” he said. Section 2.1.6 now states that the Conservative Party supports a “belief in the value and dignity of all human life.”

That “simple statement” can “bring together social conservatives and others who are not,” but who, at the same time, recognize the value and dignity of human life, he said.

The conscience protection policy passed “was very important” because it recognizes the right of health care workers to refuse both to participate in and refer for abortion, euthanasia, and assisted suicide, as opposed to the Justin Trudeau Liberals who “do not support conscience rights at all.”

“Overall, we won more than we lost,” noted Cecilia Forsyth, a pro-life and pro-family delegate from Saskatchewan who presented the maternal health resolution on behalf of her EDA.

“It certainly shows that there is a basis for social conservatives, and our type of beliefs” in the Conservative Party, she said, pointing out that the Conservative resolution condemning sex-selection abortion “shows the majority of Canadians, which we know from the polls, do not support sex-selective abortions.”

Deleting the definition of natural marriage

But the vote to delete the definition of marriage from the Conservative policy book was a huge loss, say both Fonseca and Forsyth.

The resolution, which passed by a vote of 1,036-462 with a majority in all provinces except Saskatchewan, certainly dwarfed all others in attracting media attention and controversy.

Tory leadership hopefuls MPs Kellie Leitch and Maxime Bernier, as well as Ontario’s PC Party leader Patrick Brown crowded around the mic on Saturday to speak in favour of the motion, which was also championed by Calgary MP Michelle Rempel.

“I think it’s a no-brainer. This issue was resolved 10 years ago. There is no point in having … obsolete language about something that was changed in law and society a decade ago,” the Calgary MP told reporters according to the Globe.

The resolution’s proponents argued that deleting the definition of marriage leaves the Conservative Party neutral on the issue.

“I think in one sense, that is accurate,” agreed MP Brad Trost, who argued so vigorously against the motion that he “by default became the de facto spokesman for the ‘no’ forces.”

The Conservative Party has “not endorsed same-sex marriage,” the MP for Saskatoon-University told LifeSiteNews. “It just has not endorsed traditional marriage, so I would say that still leaves us as the most conservative” of the three major parties.

At the same time, there are “some internal contradictions” in the claim of those who voted for the resolution that the Conservative Party is open to both social conservatives and advocates of same-sex “marriage.”

“If I go out, the people who say, ‘no we won’t leave’ have a problem, because they don’t have a full-scale political coalition,” he said. “And that’s the irony of this issue, and why how this plays out is yet to be seen.”

Effect of the resolution

Forsyth said that it’s hard to know what the effect of the resolution will be, adding that at least one person told her he was leaving the party as a result of the vote.

“I’m sure social conservatives will stop donating money to the Conservative Party, because I know that’s already happening to some extent,” she said. “They may still keep their membership.”

According to Forsyth, the lobby to pass the motion was “well organized. They stormed the breakout session with their people.”

“They want not only total acceptance, they want [same-sex “marriage”] to be absolutely equal and normal,” she told LifeSiteNews. “That is why they would not want any reference” to marriage as between one man and one woman.

“Someone like myself, and I would have thought Jason Kenney, would still not want to completely let go of, or deny this definition of marriage, because it is natural law,” Forsyth said. “It’s above our parliamentary law, and for that purpose it should be recognized.”

According to Jeremy Smyth, a delegate from Vancouver Island, the writing of the resolution “may appear neutral but all the vocal and the articulation at the mike was not neutral.”

“As I watched the victory laps, and the cries of ‘Get out of our party, we don’t want you any more,’ I kind of realized it was over,” said Smyth, who ran unsuccessfully for the Conservative candidacy in Cowichan Malahat Langford in the last election.

“My experience in both nature and super nature, is that nature abhors a vacuum,” he told LifeSiteNews, adding that study of history shows that “if you abandon the family unit, usually civilization collapses within two or three generations.”

Smyth said he’s not sure if he will leave the party, but he is contemplating concentrating on regional politics, following the “radical devolutionary model” inspired by Canadian philosopher George Grant’s book, Lament for a Nation.

“I fear that the Conservative Party, in its shortsightedness, may’ve just turned Justin Trudeau into a three-term Prime Minister,” says CLC’s Fonseca.

But at the same time, pro-life and pro-family advocates should not abandon the Tories, he stressed.

And those numbers allowed delegates in Vancouver to adopt “the strongest pro-life platform in the history of the party.”