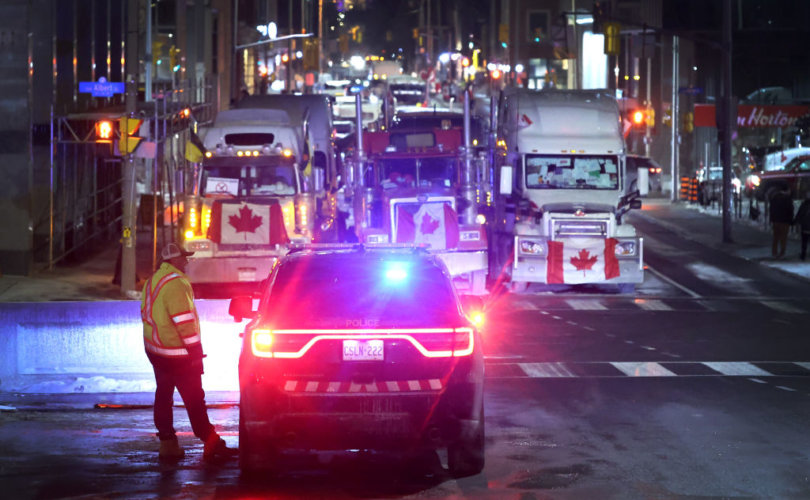 OTTAWA (LifeSiteNews) – Recently revealed notes show Canadian military officials were told by government executives to stand at the ready to possibly intervene in the Freedom Convoy protests in Ottawa.

The revelations come despite the Ontario Provincial Police along with Canadian intelligence officials saying that the Freedom Convoy protests did not constitute a serious threat.

Even Prime Minister Justin Trudeau recently admitted, while testifying before the Public Order Emergency Commission, that the Freedom Convoy was not violent.

As noted in a Canadian Press report, Canada’s Deputy Minister Bill Matthews along with top brass from the Canadian Armed Forces (CAF) were ready to assist by flying in police to various protests but said its tow trucks were too big and old to be used to clear out protesters’ vehicles.

The inside look into what government officials were planning came from comments made in an August interview between Matthews, Defence Department associate deputy minister Stefanie Beck, and lawyers involved in the Public Order Emergency Commission.

It was revealed that Matthews said to a CAF official that it should get ready “for the possibility that the CAF might be called out to intervene in the protests.”

“These plans considered the use of military equipment, infrastructure and deployment of CAF members,” he added.

Matthews along with Beck noted that the government said using the military could “inflame tensions with the protesters,” and was not that open to the idea.

The plans to use military intervention were not “seriously considered” according to Matthews and Beck, despite the fact they were drawn up.

Neither Matthews nor Beck was asked to testify before the Commission.

The Freedom Convoy saw thousands of Canadians rally in Ottawa to protest draconian COVID mandates. Many protesters were arrested, and hundreds had their bank accounts frozen after Trudeau enacted the Emergencies Act (EA) on February 14 to clear them out.

Trudeau said during his testimony that the use of the EA was needed to stop the Freedom Convoy.

During testimony at the Public Order Emergency Commission, it was revealed that Canadian Justice Minister and Attorney General David Lametti and Public Safety Minister Marco Mendicino made jokes about using the Canadian military to stop the Freedom Convoy.

Deputy Prime Minister and Finance Minister Chrystia Freeland’s testimony before the commission showed that she agreed with one Canadian Bank CEO’s call for possible military intervention in the Freedom Convoy.

Lametti and Defence Minister Anita Anand said to the Commission that the military would only be considered as a last resort.

While Trudeau ultimately revoked the EA on February 23, the ability for the government to direct banks to freeze the accounts of citizens without a court order led to immense backlash by civil rights groups and others.

The hearings into Trudeau’s unprecedented use of the EA to crush the Freedom Convoy began on October 13 and concluded on November 25.

The Commission is now tasked with releasing a report to Canada’s parliament and Senate about its findings and recommendations no later than February 20, 2023.

A couple of weeks ago while testifying at the Commission, Trudeau denied calling “unvaccinated” Canadians names, despite referring to the vaccine-free as “misogynists” and “racists” who deny science just last year.