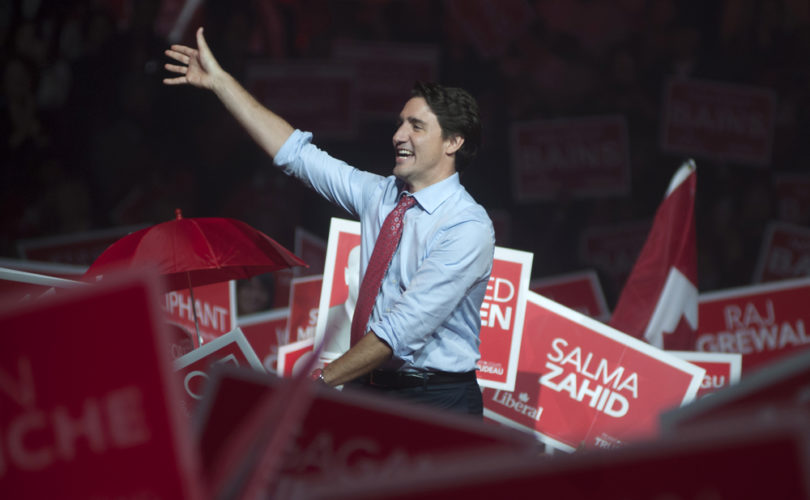 OTTAWA, March 28, 2018 (LifeSiteNews) — In an irony of ironies, the latest Ipsos poll shows women voters rejecting the man whom the Toronto Sun has dubbed Canada’s “feminist-in-chief.”

Canadian Prime Minister Justin Trudeau has long proclaimed his feminism, the defining characteristic of which is his abortion absolutism.

But the evidence suggests he has overplayed his hand.

Of 1,003 Canadians Ipsos surveyed for Global News, 35 percent of women said they would vote Conservative, compared to 30 percent for the Liberals and 26 percent for the NDP.

“There’s a delicate balance between looking like a man who is just comfortable with the times and becoming someone who is pandering and condescending,” noted a Toronto Sun editorial Monday.

Aside from Trudeau’s now infamous “mansplaining” to a woman that she should say “peoplekind,” women have “soured” on the youthful prime minister because of the latest Liberal budget, in the Sun’s view.

Although heralded by the Liberals as a “feminist document” that refers to “gender” 358 times, the budget comes across as patronizing, mystifying, and ineffectual for a squeezed middle class, “which includes a lot of women,” it noted.

Women voters “care about jobs, taxes and terrorism. They worry about the future. Simply throwing in hundreds of references to gender isn’t just meaningless, it’s condescending,” the editorial added.

He points to Trudeau’s “disastrous India trip” and “numerous tongue-tied interviews” as dimming the prime minister’s appeal to women, who “don’t like stupidity and fakeness any more than men do.”

Fonseca also pointed to the Liberals’ edict to federal frontline workers to use “gender-neutral language” as contributing to women ditching Trudeau in favor of the Conservatives.

“Neither do women appreciate [having] the words ‘mother’ or ‘Mrs.’ stolen from them by Trudeau’s radical gender-neutral agenda, under the auspices of his fake-feminist leadership,” he said.

The Liberals directed Service Canada workers to, among other things, substitute “parent number 1” and “parent 2,” for “mother” and “father,” in an apparent attempt to officially repress the fact that there are two sexes, and families with a father and a mother.

“A lot of Canadian women proudly self-identify as a ‘mother’ and don’t like Trudeau’s never-ending political-correctness machine trying to steal that identity from them,” Fonseca told LifeSiteNews.

The Liberals have come under fire for the Canada Summer Jobs abortion attestation, which Trudeau refuses to drop despite huge backlash from faith groups and excoriation in the media.

“Finally, women are seeing just how radical Justin is, and they don’t like it,” Fonseca said.

The Ipsos poll found that 60 percent of respondents wanted the Liberal government replaced by a new party, and that if an election were held now, the Conservatives would get 38 percent of the “national popular decided vote,” the Liberals 31 percent, and the NDP 23 percent, Global News reported.

How much longer can the Trudeau disaster last?