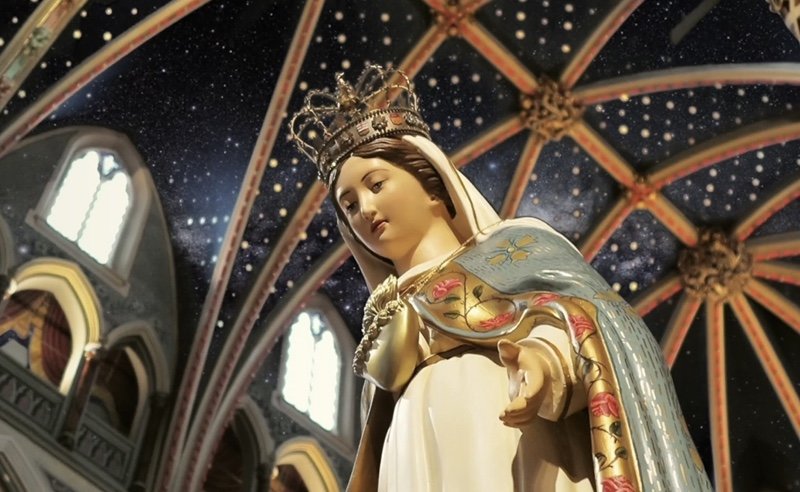 OTTAWA, July 12, 2019 (LifeSiteNews) — On Ascension eve in 1867, Fr. Luc Desilets went into the stone chapel at Cap-de-la-Madeleine in Quebec and found, to his horror, a pig beside the altar munching on a rosary.

As Dennis Girard relates the story, the young parish priest “picked up the mangled rosary, shooed the pig out of the chapel and said, ‘Men have dropped the rosary and the swine have picked it up.’”

That was when Fr. Desilets, who had spent the day in the confessional awaiting penitents who never came, vowed to restore devotion to the rosary in his parish, and reestablish enrollment in the Confraternity of the Holy Rosary.

“Within five years, he had enrolled 3,000 souls, and the parish that was dead, with a pig chewing a rosary, became too small for the amount of parishioners,” Girard told LifeSiteNews.

And that’s exactly the same mission Girard and his wife, Angelina, founders of Marian Devotional Movement, took on in 2017, the 100th anniversary of the apparitions of Our Lady at Fatima.

But what they could not foresee that in doing so they would host Canada’s first Rosary Bowl on August 22 at TD Place Stadium in Lansdowne Park in Ottawa.

At its simplest and most obvious, the Rosary Bowl is public recitation of the rosary, and will include a brief address by Archbishop Terrence Prendergast of Ottawa and Bishop Pierre-Olivier Tremblay of Trois-Rivières, Quebec.

But there’s much more to the story than that, says Girard.

Indeed, the Girards did not include the Rosary Bowl when they put together a five-day pilgrimage from Ottawa to Canada’s preeminent Marian shrine at Cap-de-la-Madeleine, home of the miraculous statue of Our Lady of the Cape, who also bears the title of Our Lady of the Rosary, he told LifeSiteNews.

Rather, they planned only that pilgrims would visit the site of the massive five-day 1947 Marian Congress, when Canada’s bishops consecrated the country to the Immaculate Heart of Mary.

That site is now the stadium for the Ottawa Redblacks football team, and Girard envisioned pilgrims strolling the grounds and comparing it to a black-and-white image of the historic Congress, which was attended by more than 1.5 million pilgrims, and numerous  prelates, including Cardinal Francis Spellman of New York and Cardinal József Mindszenty of Hungary.

But then the VP of communications for TD Place suggested the Girards actually use the stadium.

“So he emailed the Redblacks, found out when their practice ends, and said, ‘I can give you the field for free between 2 and 3, on the feast of the Queenship of Mary,” Girard said.

“Can you imagine? So we’ve got this hour window on the feast of the Queenship of Mary, where we’re coming to pray the rosary,” he told LifeSiteNews.

“We are returning to the exact holy ground where our country was consecrated to the Immaculate Heart of Mary in 1947 and we’re bringing a Pilgrim Statue of Our Lady of the Cape,” Girard said.

“And, of course, it’s just a few weeks before the federal election as well, so we know Our Lady has orchestrated this, because we sure didn’t plan it.”

A maze of amazing connections

Girard knew about Rosary Bowls because a friend with Mater Dei Radio began holding them in Portland, Oregon, after taking part in one in 2007 before the Rose Bowl in Pasadena, California.

Actor Jim Caviezel spoke at that Rosary Bowl and mentioned how meeting Fr. Patrick Peyton, the founder of the Family Rosary Crusade, inspired him to start going to daily Mass.

That’s another connection of many in this story, because the now venerable Fr. Peyton was present at the 1947 Marian Congress preaching on the family rosary out of a booth, Girard told LifeSiteNews.

The Holy Cross priest took up his Family Rosary Crusades next year to fulfil a vow he made to Our Lady when he was healed of  tuberculosis through her intercession, and by the time he died, Fr. Peyton had spoken to 28 million Catholics, Girard said.

But Girard’s essential message, he told LifeSiteNews, is to encourage Catholics to enroll in the Confraternity of the Holy Rosary.

After all, it was to these Confraternities that Pope Pius V turned with his urgent plea to pray the rosary as Christian forces fought the Muslim Ottoman Empire in the Battle of Lepanto in 1571, and “it actually saved Europe,” Girard pointed out.

“We’re building a digital bridge of rosaries across the world…and this very, very much relates to the pro-life movement,” Girard said.

“Because who is Mary? She is the mediatrix of grace. … Our Lady of the Rosary is the Queen of leverage, Our Lord leverages Our Lady to totally pour out incalculable amounts of grace,” he explained.

“And in the Catechism of the Catholic Church 1432, you find out that conversion is first the work of God, and He does it by pouring grace on hardened hearts, so we need more grace,” Girard said.

“That’s the idea, getting everybody to enroll, so you can unleash this torrent of grace upon the policy makers,” he said.

“And in a devotional sense, you can’t beat a whole flock of people, the whole church, praying the rosary together.”

Girard expects about 500 to 1,000 people at this year’s Lansdowne Rosary Bowl because the offer of the stadium came just three months ago.

But he’s already looking ahead.

“This Rosary Bowl is the first of, we hope, many,” he told LifeSiteNews.

“And we hope that by the time we get to 2022, which is the 75th anniversary of the Marian Congress, we’ll be able to fill the stadium.”