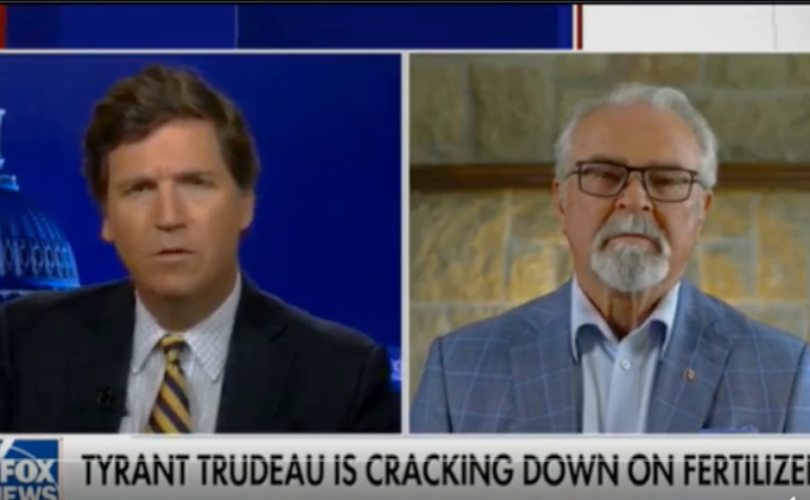 (LifeSiteNews) — Former Canadian Agricultural Minister Gerry Ritz warned Fox News host Tucker Carlson that a protest similar to the one by Dutch farmers is likely to happen in Canada if Prime Minister Justin Trudeau “continues down” the “very dangerous path” of slashing fertilizer use.

“If Trudeau does this [severely limits the use of fertilizer in Canada], what will happen to Canadian agriculture?” Carlson asked Ritz on his Tucker Carlson Tonight prime-time program on Wednesday.

Gerry Ritz – fmr Canadian minister about trouble ahead: farms in Canada will fail & banks will buy up the land pic.twitter.com/AT0fOHZvZa

“Well, I think Trudeau is banning fertilizer to that degree because he spreads enough of it himself, at the end of the day, this is his petulance coming through in response to the trucker convoy that took over his home city for about three weeks last winter … ” Ritz prefaced before answering the question.

“You mentioned Sri Lanka, you saw what’s happening there. These are salt of the earth producers that have been pushed too far. We’re seeing the same thing now in Holland, in Italy, and you’ll see it in Canada too if he [Trudeau] continues down this very dangerous path,” Ritz said.

Continuing on, Ritz mentioned the length of the border between Canada and the United States, reminding the American audience that the two countries are “synergistic when it comes to food production” and therefore Trudeau’s plan “is going to effect that tenuous situation.”

In response, Tucker accused Trudeau’s fertilizer policy of being tantamount to “messing with the food supply,” likening the leader to 20th century Chinese Communist Mao Tse-tung, whose own food supply policies led to a famine that claimed millions of lives.

“Isn’t Trudeau worried that when you mess with the food supply, you’re really messing with a core structure in any society? the popular host asked.

“I don’t think he realizes the rabbit hole he has gone down and who he is pulling in with him,” Ritz replied. “At the end of the day, Canadian production is already as environmentally friendly as you can possible get … ”

“There’s no recognition of that environment stewardship our farmers already do,” Ritz continued, adding that it is already common practice to limit the use of fertilizer, employing a “time usage” fertilizer regimen, and switching to less harmful elements as technology develops.

“We map our fields every year doing soil samples,” Ritz explained. “There’s very little acreage now that is not under the management of agronomy professionals … So, we’re already as environmentally friendly as we can with today’s technology, and there’s more to come!”

As reported by LifeSiteNews, despite the devastation caused by fertilizer reduction policies in Sri Lanka that have led to food shortages, economic collapse, and civil unrest, Trudeau and other World Economic Forum-linked leaders like Dutch Prime Minister Mark Rutte have doubled down with the implementation of similar policies of their own.