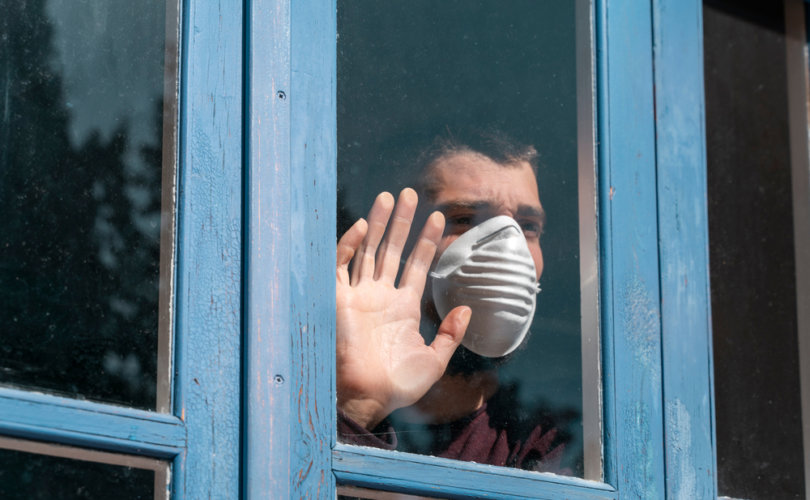 CALGARY, Alberta, February 11, 2021 (LifeSiteNews) — Travelers to Canada forced to stay in secretive quarantine hotels lack food and medical treatment while being allowed outside for only 15 minutes per day, which is less than the UN recommends for prisoners.

CBC News reported on Tuesday on the case of two travelers who were forced to stay in Calgary’s hotel quarantine facility.

Angelo Vanegas spent an entire fortnight in the facility, despite having provided details of his planned 14-day quarantine which he would spend at home with his mother and sister. Vanegas, who had tested negative for the virus before his flight arriving into Calgary, was forced to spend his quarantine in the hotel since “health officials” did not approve his proposed plan, due to his mother and sister having underlying medical conditions.

Vanegas described the three meals per day he was permitted to have as “kid-sized.” He presented pictures showing the small portions dumped into disposable cardboard boxes. No meals were served after 6 p.m., nor were any deliveries from outside allowed, so passengers had to rely on purchasing “unhealthy snacks” if they were hungry.

Vanegas also explained how he was left “begging” for medical treatment for an ingrown toenail which was infected. After initially receiving some epsom salts, it was only when Vanegas threatened to call the emergency services that his needs were taken seriously. “I said to them, listen, you guys take me to the hospital, or I will have to call 911 because I am in so much pain,” he told CBC.

As a result, he was taken to a hospital for antibiotics, and then again, two days later, to have the toenail removed.

But Vanegas also described the severity of the isolation which passengers had to endure: Guards were situated in the corridors “to ensure no one leaves,” and the inmates were allowed out of their rooms for just “15 minutes” a day. Those 15 minutes could be spent in the hotel courtyard, where others are permitted a smoking break.

“I feel like a prisoner in here, you know,” Vanegas said, who was released after the full 14 days on January 30.

However, Vanegas was not the only whistleblower in the case of Canada’s COVID facilities.

Mitch Beaulieu arrived in Calgary from Florida on January 25 and showed the proof of his pre-flight negative test for COVID-19. The test did not meet the approval of Canadian health officials. “Police and security officers escorted him from Calgary’s airport to a van with blacked-out windows and took him to a hotel with hallways lined with plastic. There, he was greeted by people wearing hazmat suits, gloves and face masks.”

Beaulieu described the situation as “unbelievable,” adding, “I literally felt like I was in a third-world country.”

He noted that he was not informed where he was being taken, and when he repeatedly asked why or how long he was there for, he was merely told, “Sorry, sir. We can’t tell you.”

Arriving at the hotel without his luggage, Beaulieu had only his phone and the clothes he was wearing. He submitted a picture to CBC, showing that inmates were prohibited from sharing the location of the hotel: “[T]o just be completely left in the dark and thrown in a room and have no communication with anybody, that’s unacceptable.”

Beaulieu was eventually released on January 28 after testing negative with a test approved by the government.

Health Canada has not revealed the location of facilities, referring to the “privacy and safety of travellers.” Nevertheless, a website has been created beginning to detail the locations of the sites in order to provide relatives of those interned there with some information on the whereabouts of their loved ones.

When asked about the treatment of the two men, Prime Minister Justin Trudeau defended himself, saying “that these aren’t detentions; these are medically based isolations.”

“We are not detaining people,” Trudeau continued. “These are public health measures that are necessary to ensure that we are keeping Canadians safe, particularly given the arrival.”

The government of Canada recently announced that “all air travellers … with very limited exceptions” would be subject to mandatory hotel quarantine for at least three nights, while awaiting the results of the mandated test taken on arrival, which is in addition to the pre-flight test. The hotel stay will be paid for by the passengers themselves and is expected to be more that $2,000. All flights are directed exclusively to Vancouver, Calgary, Toronto, and Montreal.

If passengers test negative after three days, they will be freed from the facility and “will then be able to quarantine at home under significantly increased surveillance and enforcement,” Prime Minister Justin Trudeau announced.

There is uncertainty about when the recently announced measures will come into full effect, as the government has faced significant backlash after revealing the plans. Speaking on February 2, Trudeau suggested that he anticipated the system to be operational before March.

Over 5,000 people have already been detained in the forced quarantine facilities.

In a lengthy statement to LifeSiteNews, Health Canada defended the quarantine facilities, but avoided the specific questions posed about the treatment of both Vanegas and Beaulieu: “To protect the privacy and safety of travellers, traveller information and locations/names of DQF [designated quarantine facility] are not disclosed to the public. However, any traveller who is directed to a DQF or is currently staying in one could share information, including the location of the facility, with their families or loved ones.”

“All rooms at the DQF are equipped with phones for out-bound calls, which travellers can use without restriction,” the statement continued. “Travellers, who have cellular or other devices available, are also welcome to use those to connect with family or friends if they wish.”

“In some instances, travellers see their families as they leave the airport and can provide information for their unexpected deferral in person before their transfer to the DQF … In all cases, they are able to share information freely with family or loved ones,” Health Canada continued.

Despite the statement from Health Canada claiming that travelers could see their families or share information with them, evidence from Beaulieu seemed to dispute that.

Just recently, Nikki Mathis was also forced into quarantine in Calgary, despite having a negative COVID test which allowed her to fly into the country. Mathis was informed that she would be arrested if she resisted, and when her husband spoke on the phone to officers, they refused to tell him the location of the facility which she would be taken to.

Canada’s Justice Centre for Constitutional Freedoms (JCCF) is planning to sue over the new quarantine rules, which the group says “aligns with the practices of repressive and undemocratic regimes.”