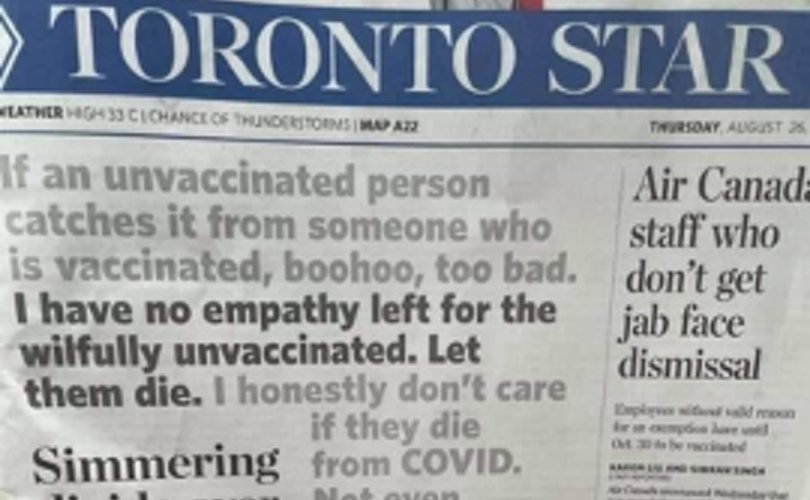 TORONTO, Ontario (LifeSiteNews) – On August 26, the Toronto Star, Canada’s largest newspaper, filled its front page with vitriolic and mocking comments collected from social media toward people who have not taken an experimental coronavirus vaccine.

“If an unvaccinated person catches it [COVID] from someone who is vaccinated, boohoo, too bad,” the front page of the Toronto Star read, in extremely large text.

“I have no empathy left for the wilfully unvaccinated. Let them die,” the second statement blared, this time bolded.

These inflammatory comments were accompanied by an article written about the purported growing disdain for the unvaccinated.

After receiving immense backlash, the Star changed the incendiary front-page and issued a statement addressing the retraction.

The article accompanying the dehumanizing statements was not an exposé on such opinions, but instead appeared to affirm the comments.

The article referenced survey results and quoted from “professionals” indicating a widespread hostility towards the “unvaccinated” throughout Canadian society.

“According to a recent Angus Reid poll most vaccinated Canadians are indifferent to the unvaccinated getting sick with the virus, with 83 per cent saying they have no sympathy for those who choose not to get the COVID-19 vaccine and then fall ill. Anecdotally, patience is even wearing thin among health-care professionals,” wrote the Star.

Entirely absent from the report was any recognition that much of the skepticism of the so-called “vaccine hesitant” towards the push to vaccinate the majority of the world’s population is due to the fact that the vast majority of people are not at risk of serious disease to begin with – the U.S. Centers for Disease Control and Prevention (CDC) reports an infection survival rate of greater than 99.95% for those under age 50. Meanwhile, the list of U.S. Food and Drug Administration (FDA)-recognized adverse events to the injections has grown from severe anaphylactic reactions to include fatal thrombotic events, the inflammatory heart condition myocarditis, and neurologically disabling disease like Guillain Barré Syndrome.

Further, the vaccines are still undergoing clinical testing until 2023, and have already been linked to a conservative estimate of 45,000 deaths in the U.S., and an additional 21,000 in the E.U.

Instead, the article persisted in emphasizing the opinions of those hostile towards “the unvaccinated.” Dr. Anita Sircar, an infectious-disease physician, was quoted as saying: “Last year, a case like this [a person seriously ill from COVID-19] would have flattened me,” but “this year, I [have] struggled to find sympathy.”

A Canadian social psychologist, Sarah Konrath, was quoted seemingly to excuse the apparent widespread hostility towards the unvaccinated. “People are exhausted at this point,” Konrath said. “At the best times, empathy takes effort… It’s been a year and a half of very challenging stress, financial stress, homeschooling, worries about jobs, worries about health, social isolation.”

“People don’t have the psychological resources that we would have had otherwise to invest in people different from us,” she continued.

The phrase “different from us” seems to fit with a warning made by Constitutional rights lawyer Rocco Galati, who has said the vaccine measures are leading to a growing divide within Canadian society.

This divide is creating a “class of Canadians” – the unvaccinated – that is being actively demonized and “discriminated” against. Such discrimination, according to Galati, is illegal under Section 15 of the Canadian Charter of Rights and Freedoms.

The Star article also quoted clinical pharmacist Amir Imani, who when trying to explain the logic behind the hostility to the unvaccinated, compared dying without having received an experimental COVID jab to a smoker getting lung cancer.

However, the article accidentally showed Imani’s analogy to be fallacious by highlighting that the group most hesitant to receive the vaccine are 18–29-year olds – there is a distinct difference between jeopardizing health via smoking, and making the choice as a young person to avoid the shot, which the evidence shows is more likely to cause serious adverse effects for the young.

According to the CDC, those aged 18 to 29 years old are the most likely group to develop serious and life-threatening heart inflammation conditions such as myocarditis and pericarditis from the jab. Additionally, the data show the group only has a 0.003-0.013% chance of dying from COVID. Unlike smoking cigarettes, apprehension to the shot appears to be in accordance with the scientific research for this most hesitant group.

Furthermore, many concerned about vaccine coercion have pointed out that if doctors were to refuse to treat patients or offer them substandard care based on the patients’ choices, that would impact not just smokers but also anyone who had engaged in risky or unhealthy behavior. This would include the obese, promiscuous people, drunk drivers, and many HIV/AIDS patients.

Imani, instead of identifying the thousands of deaths and serious adverse reactions reported by after individuals receive one of the experimental jabs, went on to claim that “conspiracy theories” are the reason why many people are not being vaccinated. Some people are “victims of misinformation” and others face “systemic barriers, like not having access to a family doctor to answer questions about the safety of the vaccine,” the article said.

Absent from the article is reference to the many doctors who have spoken publicly about the risks associated with receiving these experimental, abortion-tainted vaccines.

Dr. Mark Trozzi, a Canadian medical doctor who has been outspoken about vaccine injury, said, “It is tragic that the Toronto Star is so involved in spreading COVID propaganda, that they perform no real investigative journalism. If they did, they would know that the so-called ‘vaccines’ are ineffective, and actually stimulate the evolution of variants. These variants are dangerous to the naïve victims of the COVID injections, but of little concern to people with natural immunity. Also, these so called ‘vaccines’ produce antibody dependent enhancement and may render their victims very vulnerable to coronaviruses in the future with increased disease severity and death.”

Dr. Peter McCullogh has said the COVID-19 “mass vaccination program will go down as one of the most deadly, one of the most injurious and costly in human history.” Dr. McCullough is an internist and cardiologist, along with being a professor of medicine at Texas A&M University Health Sciences Center. He is distinguished as the most published person in history in his field and is an editor of two major medical journals.

Additionally, Dr. Vladimir Zelenko – a Nobel Prize nominated doctor and leader in hydroxychloroquine treatment for COVID-19 – has also stated, “There is NO medical necessity for any [coronavirus] vaccines,” especially for an “mRNA injection that has shown to have many dangerous side effects.”

Two days after the publication of the article the Toronto Star conceded that “[g]reater care should have been taken” and that their front page had “exacerbated division between readers.”

The Star’s concession nevertheless attempted to deflect some of the criticism they received, stating: “It’s apparent, too, that many had not read the accompanying article. But there were plenty of subscribers who took offence at the front-page display they considered overly provocative and hateful.”

One angry reader told the Star, “Your front page says, ‘Simmering divide.’ Clearly you are trying to make it boil over.”

The Star’s “apology” article blames the “misinterpretation” of their article on the fact that “There were no quotation marks to clearly signify that these [the vicious comments of apathy] were the comments of others,” and therefore “Many readers thought the statements were the Star’s view.”

The “apology” does not include the Star saying that it regrets publishing the statements, but rather that it regrets the provocative manner in which they were published.

“No doubt the article would have stirred reaction even without the front-page presentation,” but “such reactions cannot deter the Star from writing such stories,” the paper stated.

“In this case though, the poor execution of the front-page design unfortunately exacerbated that reaction,” the statement continued.

The Toronto Star lists a set of editorial principles under which they purportedly operate called the “Atkinson principles,” named after their 1892 founder Joseph E. Atkinson.

By not rebuking the comments they featured on their front-page, but instead providing quotations and survey results to affirm hostility against the unvaccinated, the news outlet arguably violated their own founding principles.

These principles include, among others:

The Star’s apology failed to explain how the paper reconciles its foundational principles of “Individual and civil liberties” and “a strong, united and independent Canada” while promoting opinions that divide and discriminate based on medical classification.

Vaccine Choice Canada (VCC), a non-profit organization that advocates for informed decisions about vaccines, has published a statement on its website outlining key reasons why every Canadian should oppose vaccine coercion and the implementation of what they call a “medical apartheid.”