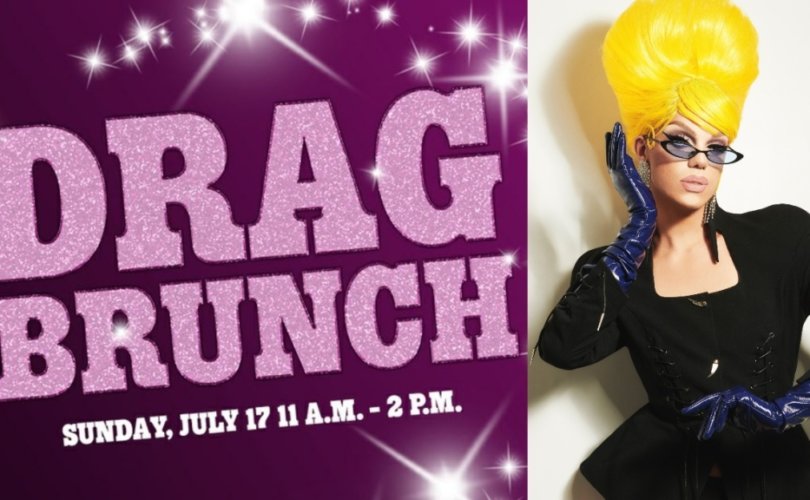 CALGARY, Alberta (LifeSiteNews) – The supposed family-centered Calgary Stampede, which dubs itself as the “Greatest outdoor show on earth,” is set to host a “Drag Queen” Brunch while at the same time green-lighting its food vendors to sell hotdogs stuffed with bugs.

Last month, the Stampede, which is taking place from July 7 to July 17,  announced it was offering a “Drag Queen Brunch” as part of the rodeo festivities.

The “Drag” brunch concept, which has become popular in recent years notably in left-leaning cities, for the Stampede will include no less than eight “Drag” performers.

One of the performers goes by the name “Karla Marx,” which is a name wordplay for Karl Marx, who is noted as the father of Communism.

Marx’s Instagram page shows photos of the performer posing with hardly any clothing on.

The “Drag” brunch will take place on July 17 for those who are 18 or older.

According to Stampede director of programming Kyle Russell, the Stampede is “excited to expand” its “programming and bring some amazing international and local drag talent to the Stampede Midway.”

Many took to social media to blast the Stampede for hosting “Drag Queen” events.

Counter Signal founder Keean Bexte tweeted, “The Calgary Stampede is featuring Karla Marx, for its ‘Drag Brunch. I remember when the Stampede was the Greatest Outdoor Show on Earth. Now it is just a communist circle jerk.”

“The Calgary Stampede just got even more woke after organizers announced a ‘Drag Queen Brunch’ during this year’s rodeo festivities.”

In recent months, the promotion of LGBT ideology from big media as well as large corporations via drag “queens” and “kings” has become more commonplace.

TV streaming service Discovery+ announced that starting in June it will unveil a new limited series offering a glamorized look at teenage participation in the world of drag.

Some U.S. states have fought back against the extreme LGBT ideology being targeted at young children.

The Stampede, which attracts visitors from all over the world to North America’s premier rodeo event, this year decided to expand its offering of foods made with bugs, which in recent months has been pushed by globalists as a meat alternative.

As posted on the Stampede’s New Midway Food page, an “All-Beef Meal Worm Hot Dog, made using mealworm protein,” will be offered.

While the sale of bizarre foods at the Stampede is not a new concept, both crickets and mealworms in recent months have been promoted by global elites as a source of protein that they say could replace beef or pork.

Conservative Party of Canada MP and leadership candidate Dr. Leslyn Lewis recently blasted the current cancel-culture crusade against red meat and the push by globalists to promote the of eating bugs.

The Great Reset, of Klaus Schwab and his World Economic Forum (WEF) has as part of its agenda the promotion of eating bugs to replace beef, pork, and other meats which they say have high “carbon” footprints.