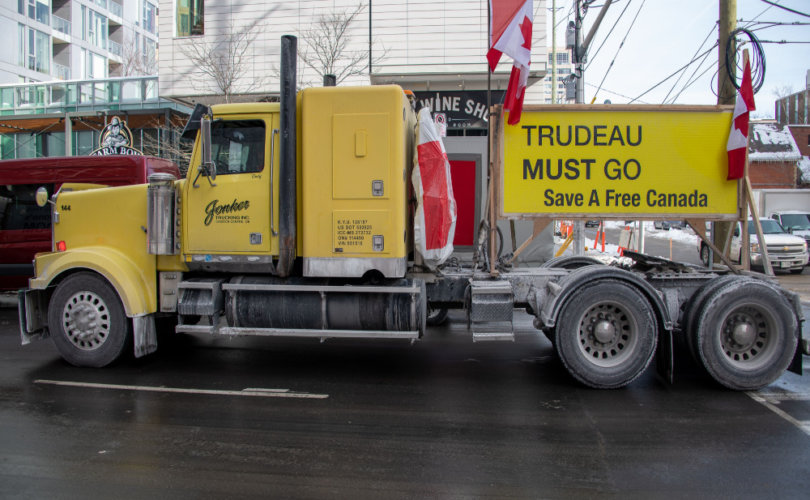 HAMILTON, Ontario (LifeSiteNews) – Canada’s top pro-life group blasted Prime Minister Justin Trudeau for spreading “misinformation” about abortion in the country after he declared on social media today that abortion is a “right” in the country.

Trudeau wrote on Twitter, “Access to safe and legal abortion is a right in Canada – and our government will always defend that right.”

“I agree, there’s much more work to do to expand access to reproductive health services so they’re available to all Canadian women. We will keep doing that work,” Trudeau added.

Trudeau’s tweet came in response to a Globe and Mail joint opinion piece written by presidents Dr. Katharine Smart of the Canadian Medical Association, Dr. Gigi Osler of the Federation of Medical Women of Canada, and Dr. Deidre Young of Canadian Women in Medicine advocating for expanded abortion access in Canada.

The group of doctors claimed that “access to abortion care remains neither equitable nor universal in the Canadian health care system.”

Trudeau is ‘simply wrong’ on abortion being a ‘right,’ says pro-life advocacy group

Campaign Life Coalition communications director Pete Baklinski told LifeSiteNews that Trudeau is “simply wrong yet again when it comes to abortion in Canada.”

“There exists no court-defined or Charter right to abortion in Canada. Abortion was first decriminalized in 1969. Prior to this, committing an abortion was a crime under the Criminal Code,” Baklinski said.

Baklinski said that Trudeau is spreading “misinformation by stating that abortion is a right in Canada.”

“Our Charter makes it clear that ‘everyone has the right to life.’ It’s time for Mr. Trudeau to take the Charter seriously, stop discriminating against preborn children, and include them in the definition of ‘everyone.’”

“Abortion isn’t a right!!! There is no right to deprive innocent human beings of their most basic right – the right to life,” Campaign Life Coalition Youth wrote.

“Abortion isn’t health care!!! If you don’t end up with a dead baby at the end, it has failed. Name another “health service” where the goal is a corpse.”

Campaign Life director of political operations Jack Fonseca told LifeSiteNews that Trudeau is not “only wrong about the constitution,” but he also has a “vile, monstrous attitude towards innocent unborn children.”

“The fact of the matter is that Trudeau has never met a fetus he didn’t want to kill,” Fonseca said.

“He seems to be obsessed with murdering unborn children, both in Canada and overseas, where he uses Canadian tax dollars to subsidize abortion. He’s a sick, sick man.”

In recent days, Trudeau has upped his pro-abortion tone in a very public manner.

After the U.S. Supreme Court voted to overturn Roe v. Wade last month, he said that the news was “horrific” and vowed to continue advocating for the killing of the unborn in Canada.

There is no law in Canada both allowing or disallowing abortion. It exists in a legal vacuum

Baklinski told LifeSiteNews that in the 1988 Morgentaler decision the Supreme Court of Canada threw out the 1969 abortion law on the basis that it was unconstitutional, “ruling that the law’s detailed criteria for obtaining an abortion violated a woman’s Charter right to ‘security of the person.’”

“Neither the Canadian Charter of Rights and Freedoms nor the Supreme Court of Canada established a right to abortion,” Baklinski said.

Abortion was decriminalized in Canada in 1969 when then-Prime Minister Pierre Trudeau (Justin Trudeau’s father) passed a heavily criticized Omnibus Bill that amended the criminal code to allow abortions to be done in hospitals under permissive circumstances.

The court encouraged the Canadian Parliament to come up with replacement abortion legislation. This effort failed when then Prime Minister Brian Mulroney’s draft law was dismissed in a Senate tie vote. The result of this is that since then Canada has no abortion law at all, and thus abortion is permitted through all nine months of pregnancy.

Trudeau for years has professed his support for abortion despite claiming to be Catholic. Since taking office in 2015, his Liberal government has put forward many pro-abortion policies such as stripping pregnancy resource centers of their charitable status because they promote life instead of abortion.