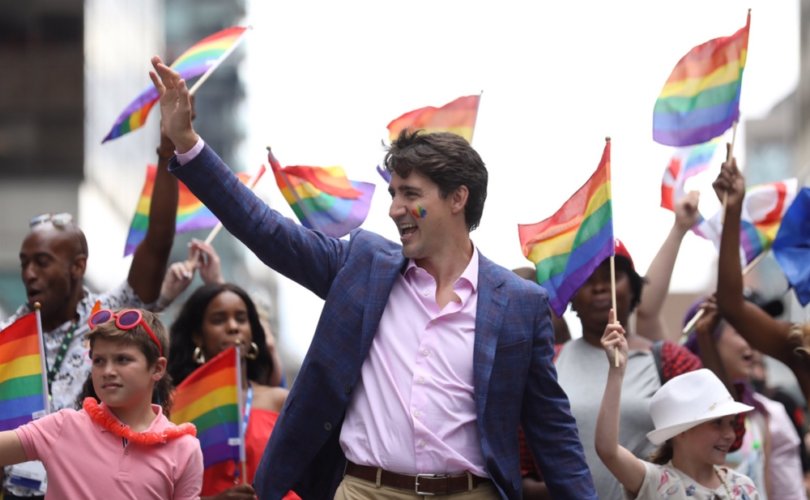 Prior to the parade Trudeau, who calls himself Catholic, wished Muslims a “Pride Mubarak,” referring to a Muslim religious holiday coinciding with the day of the parade in which Muslims celebrate the end of the holy month of fasting.

“This [Pride Parade] is all about including people, which is why today on Eid al-Fitr I’m happy to wish a ‘Pride Mubarak’ [Muslim for ‘Blessed Pride’] to everyone as well who is celebrating of the Muslim faith,” said Trudeau.

“It’s all about how we celebrate the multiple layers of identities that make Canada extraordinary and strong. Today we celebrate with the entire LGBTQ2 community,” he added.

For the event the Liberal leader wore rainbow colored socks that had the Muslim words “Eid Mubarak” [blessed celebration of the end of Ramadan] printed on them. This is the second year Trudeau has marched in the event as Prime Minister.

Islam and homosexuality are largely seen as incompatible with each other. Based on teachings of the Qur'an and Sunnah, the Muslim faith condemns homosexuality for clashing with the natural order created by God, for undermining the family and the institution of marriage, and for leading people astray from God and his plan for the world.

Some Muslim countries, such as Iran, Saudi Arabia, Sudan, and Yemen, punish active homosexuals with jail, flogging, and even the death penalty.

People of various faith traditions have criticized Pride Parades for normalizing lifestyles and behaviors that they say are interpreted in their religions as deadly to both body and soul.

Last year Canada’s public broadcaster, the CBC, published an article for parents outlining what they can expect when they bring their family to a Pride Parade.

“Your kids will probably see boobs and penises. There will [be] bodies of all shapes, sizes and in all states of undress. For parents like Ian Duncan, dad to 3-year-old Carson, this is all part of the appeal. ‘We’re not body shamers,’ he says. ‘It all feeds into my son’s emotional intelligence and sexual development. And it’s never too early to think about that.’ Consider the experience as a great opportunity for some interesting discussion. Explain what you’re seeing, and be ready for questions,” the article by Alice Lawlor states.

Participants usually perform hyper-sexualized dancing with twerking and grinding. And as Lawlor writes, some groups of marchers go topless and others are totally nude. Participants want everyone to accept their homosexual lifestyles and all the behaviors that go with it.

But Trudeau apparently justified exposing his children to simulated sex acts, public nudity, and a wide variety of homosexual fetishes, tweeting “Love is Love” along with pictures of his kids marching in the event sporting rainbow colored maples leafs on their cheeks.

Promoting homosexuality, even at the expense of his children’s innocence, is what Trudeau called one of his “core principles” in his 2014 memoir “Common Ground.”

Trudeau wrote at that time that for him, the teachings of the Catholic faith on homosexuality as well as abortion play no part in his role as leader.

“As someone who was raised Roman Catholic, and who attended a Jesuit school, I understand that it is difficult for people of deep faith to set their beliefs aside in order to serve Canadians who may not share those beliefs. But for me, this is what liberalism is all about. It is the idea that private belief, while it ought to be valued and respected, is fundamentally different from public duty,” he wrote.