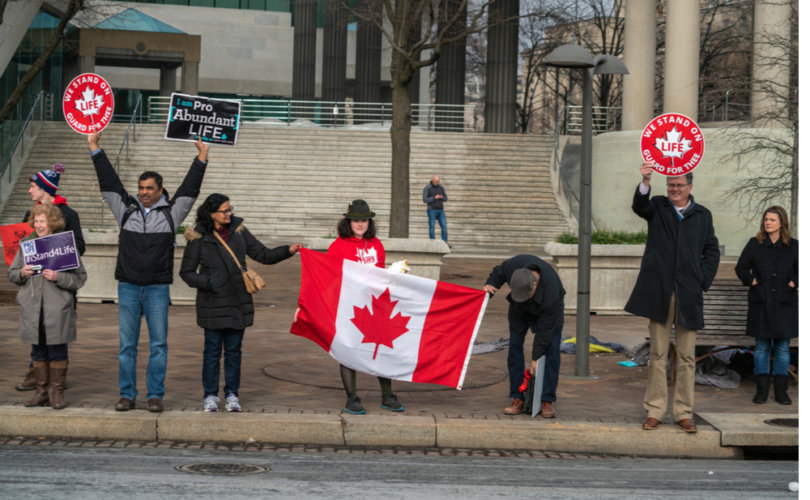 “A re-elected Liberal government will: No longer provide charity status to anti-abortion organizations (for example, Crisis Pregnancy Centres) that provide dishonest counseling to women about their rights and about the options available to them at all stages of the pregnancy,” a portion of the 86-page “Forward for Everyone” platform stated.

The Liberal party platform claims that “anti-choice organizations are actively working to spread misinformation about abortion, putting the health and safety of young people and vulnerable women at risk.”

“Failure on the part of a province to meet this standard would result in an automatic penalty applied against federal health transfers,” the document reads.

The Liberals also promise to provide up to “$10 million to Health Canada to develop an easily accessible portal that provides accurate, judgment-free, and evidence-based information on sexual and reproductive health and rights, which will include a section that counters misinformation about abortion.”

They will also give up to $10 million over three years to “youth-led grassroots organizations that respond to the unique sexual and reproductive health needs of young people.”

Campaign Life Coalition (CLC) blasted the Liberals’ new “Forward for Everyone” section on “reproductive rights,” calling it an “attack on crisis pregnancy centres and organizations that support women.”

“His (Trudeau’s) war on pro-life Canadians goes way back, from the moment he became leader, stating that pro-lifers could not run in his party, to the summer jobs attestation debacle, to his bullying of the province of New Brunswick for not funding private abortion business.”

Wojciechowski told LifeSiteNews that Trudeau’s latest attack on crisis pregnancy centres and organizations that support women and offer them life-affirming alternatives “proves that, according to Trudeau, either you ‘Believe in what I believe,’ or you are cut from any direct or indirect federal assistance.”

“Crisis pregnancy centres provide material and other supports to women who are unsure about abortion and looking for a way out of killing their preborn children,” added Wojciechowski.

“Trudeau often accuses pro-life groups of spreading misinformation. Abortion kills a living human being inside the womb. I urge his fact-checkers to prove us wrong.”

Trudeau called a federal election a few weeks ago and Canadians will head to the polls on September 20.

Conservative Party of Canada leader Erin O’Toole told reporters yesterday that he will “defend the right of access in all parts of the country.”

“As you know, I am a pro-choice member of parliament and leader of the Conservative Party, and I will always defend the right of women to make health decisions for themself,” O’Toole said.

As for Trudeau, he announced in July that the federal government will deny funding to the province of New Brunswick due to it limiting women’s access to abortion.

Canada has no law protecting babies from abortion, meaning the practice is permitted through all nine months of pregnancy.

Trudeau said recently that if re-elected he would create a $1 billion COVID-19 vaccine passport fund for provinces to access.