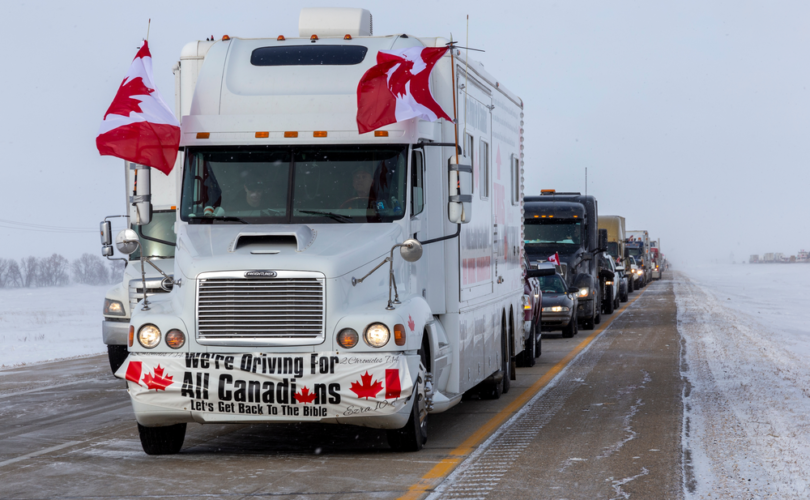 (LifeSiteNews) – A top director for Canada’s official money regulator admitted that those who donated to the truckers’ Freedom Convoy just wanted to support the “cause” and that the contributions had nothing to do with financing “terrorism.”

“It was their own money,” said Barry MacKillop, who serves as the deputy director of the Financial Transactions and Reports Analysis Centre, to a House of Commons finance committee last Thursday as reported by Blacklock’s Reporter.

MacKillop conceded that the money raised was not “cash that funded terrorism or was in any way money laundering.”

He added that these people were “fed up with COVID and were upset and saw the demonstrations,” and “just wanted to support the cause.”

MacKillop also said people who supported the Freedom Convoy financially “supported the cause before it was declared illegal.”

According to Blacklock’s Reporter, the Trudeau government, using the Emergencies Act (EA), put in place anti-terror financing laws to go after some of those who donated to the Freedom Convoy.

The Freedom Convoy’s original GoFundMe page was canceled February 4 after raising more than $10 million. The group subsequently started a GiveSendGo page as a result. However, both Canadian and U.S. mainstream media outlets came under fire for using hacked information from the truckers’ GiveSendGo list to dox donors who donated to the cause.

The hack of the Freedom Convoy’s GiveSendGo donor list was detailed and included one’s name, email address, IP address, and payment details, along with postal/zip codes.

Canadian Prime Minister Justin Trudeau took the unprecedented step of invoking the EA on February 14, claiming he needed it to deal with the Freedom Convoy. The demonstrators had been in Ottawa for the past three weeks protesting COVID mandates.

The EA had allowed the government the power to freeze anyone’s bank account associated with the convoy without a court order, including those who donated to the Freedom Convoy. It proceeded to put a block on several accounts.

Last week, Canadian Minister of Finance and Deputy Prime Minister Chrystia Freeland admitted the reason some Freedom Convoy supporters’ bank accounts were frozen under the EA was to “convince” donors to “listen to reason.”

In January,  a CBC host suggested that Russia was somehow involved in the truckers’ Freedom Convoy while talking with Canadian Minister of Public Safety Marco Mendicino.

There has been no evidence that this is the case, however.