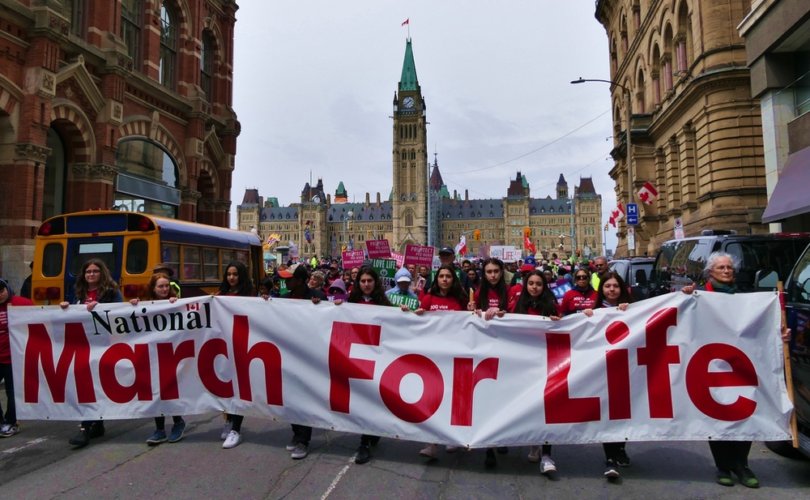 OTTAWA, April 15, 2020 (LifeSiteNews) — Pro-life Canadians are invited to join the first-ever virtual March for Life with the annual rally in the nation’s capitol canceled because of coronavirus pandemic emergency regulations.

The march commemorates Canada’s “day of infamy” — May 14, 1969, when the Liberal government of Prime Minister Pierre Elliot Trudeau, the current prime minister’s father, passed an omnibus bill that permitted abortion under certain circumstances and opened the door to abortion on demand.

The legislation was struck down by the Supreme Court of Canada’s Morgentaler decision of January 28, 1988, as violating the Charter of Rights and Freedoms, and Canada has been without a law restricting abortion since that time, during which an estimated four million children have been killed in the womb.

This year, the virtual march was to take place on May 14, the very day Canada’s parliamentarians passed the omnibus bill 51 years ago.

Campaign Life announced last week the march was canceled and that it was planning a  week-long, Virtual National March for Life, which runs from May 10 to 14 and will replicate many the March’s traditional events, such as the candlelight vigil, Masses and religious services the morning of the event, and a rally before the march.

“In general, we have never done anything like this,” Campaign Life Coalition Ottawa spokesperson Debbie Duval told LifeSiteNews.

“We are definitely disappointed by not being able to physically march, but we also see this as a wonderful opportunity. We remain hopeful that Canadians will tune in, and for those who have never been able to go to Ottawa, we hope this March for Life experience will kick-start their involvement in the movement,” she added.

The Virtual National March for Life program “will include high profile movies and interviews streamed online from May 10 to 12; a virtual candlelight vigil on Wednesday, May 13; online pro-life Masses and religious services on Thursday, May 14 and a live-streamed ‘virtual’ rally, with guests from Canada and around the world,” according to Campaign Life’s website.

“Plans are also in the works for a pro-life special on May 14 on the Eternal Word Television Network (EWTN), hosted by international pro-life speakers Kevin Dunn and Stephanie Gray of “Love Unleashes Life” which “will focus on the most important life issues facing Canadians currently—and what we can do as a nation to rebuild a culture of life,” it stated.

The virtual March “will also bring awareness to the killing occurring at the other end of the spectrum, near the end of life, with a focus on the proposed expansions to Canada’s euthanasia law,” Campaign Life announced.

“Let us never forget that abortion is the greatest human rights injustice of our time, and even during this ongoing global health crisis, the killing of children before birth continues in our country,” it stated.

“While we may feel immobilized due to stay-at-home orders, it’s up to all of us to mobilize online, in prayer and solidarity. Now, more than ever, it’s time to boldly let our political leaders know that the right to life needs to be protected, and celebrated. Be not afraid, Canada.”