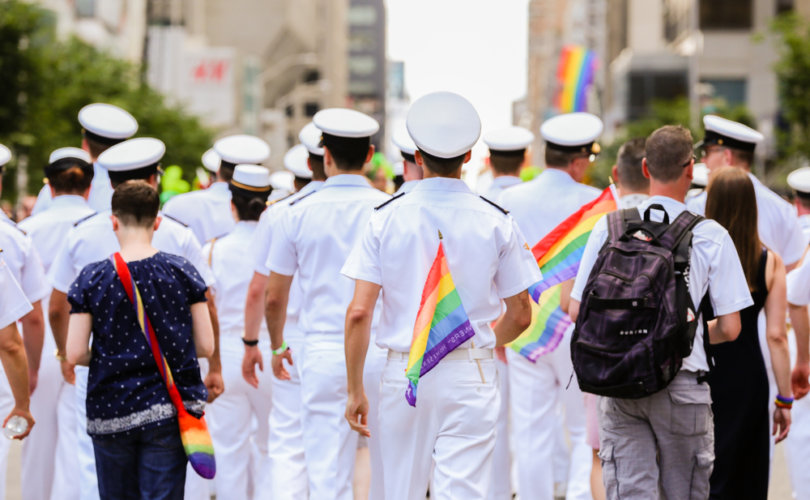 “In an effort to epitomize diversity and inclusion,” Lloyd wrote in his directives, “the (Navy) encourages attendance to Pride events and authorizes the wear of uniform to participate in or attend the parade.”

The Navy commander said that effective immediately, Navy personnel no longer had to seek permission in order to wear their uniforms in homosexual “Pride” parades.

Lloyd marched in last year's Pride Parade in Toronto. He told Canadian Press that he issued the directives after meeting with members of the LGBTQ community, who complained to him about Navy members needing permission to wear their uniforms in Pride Parades.

“They were speaking to the fact that you needed chain-of-command approval in order to wear a uniform,” he said.

“There is no reason why you should not be able to march in that parade in uniform if you should be so inclined. … I didn't ask permission, and maybe I was supposed to. But it's about being inclusive,” he added.

National Defence spokesman Daniel Le Bouthillier told Canadian Press that the military-wide directive is still being developed, but will likely look like the Navy’s directives.

“The Canadian Armed Forces recognizes that the strength of the team comes from the diversity of its people, which is why participation in Pride parades is absolutely supported.” he said.

Homosexual activists strategized decades ago that the best way to gain the public’s acceptance of their lifestyle and behaviors was to win support from corporations and all levels of public services, including police, firefighters, and military.